We have a responsibility to shake things up," says Zach Carothers in a new interview with Kyle Meredith of Louisville's 91.9 WFPK 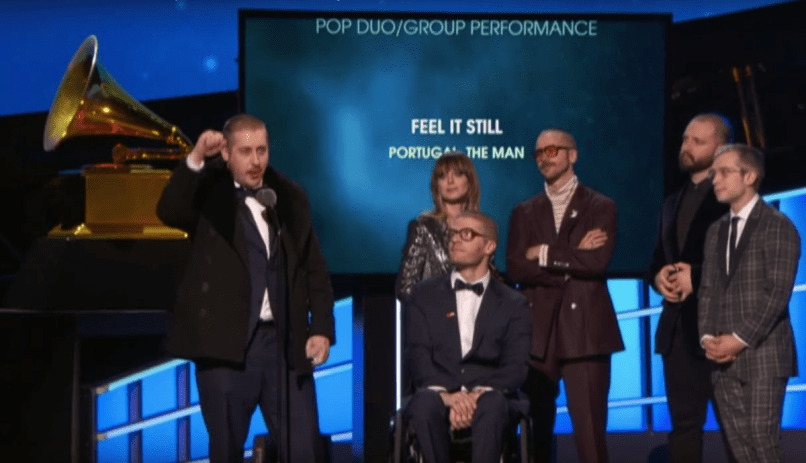 Portugal. the Man at the 2018 Grammys

In a new interview with Kyle Meredith of Louisville’s 91.9 WFPK, Carothers spoke about their victory and the subsequent comments he made during the band’s acceptance speech. “Yeah, I said, ‘Hail, Satan!’ I thought it was something funny to. Something I always wanted to do,” Carothers explained.


He went on to joke that “the illuminati doesn’t really have as much power as people think they do in Hollywood. They do have the best parties. But as far as like, getting ahead and deals with the devil, t’s really not that great. It’s just kind of a secret publishing company. They’re like a PR firm that had their time, but they’ve kind of been watered down like so many things. The illuminati had their moment.”

“Unlike most pop stars, we don’t care,” Carothers continued. “We still open up our shows with [Metallica’s] ‘For Whom the Bell Tolls’. We feel a responsibility in the pop world to bring back and show where we came from. We have a responsibility to shake things up.”

However, Portugal. the Man are embracing some aspects of their new-found fame, such as engaging in a few undisclosed A-list collaborations. “We got some cool things coming up,” Carothers revealed. “Once you get a hit song, a lot of people reach out. I’ve always wanted to do that. So many times we’ve come up with lyrics that are amazing but I can’t sing it, but if Rihanna can sing it, that would be amazing. We’ve done a couple of things and it’s pretty fun.”

Listen to Portugal. the Man’s full interview with Meredith below. The band is currently on the road support their latest album, Woodstock, and you can grab tickets to see them here.