Portugal. The Man perform “Live in the Moment” with children’s chorus, drumline on Colbert: Watch 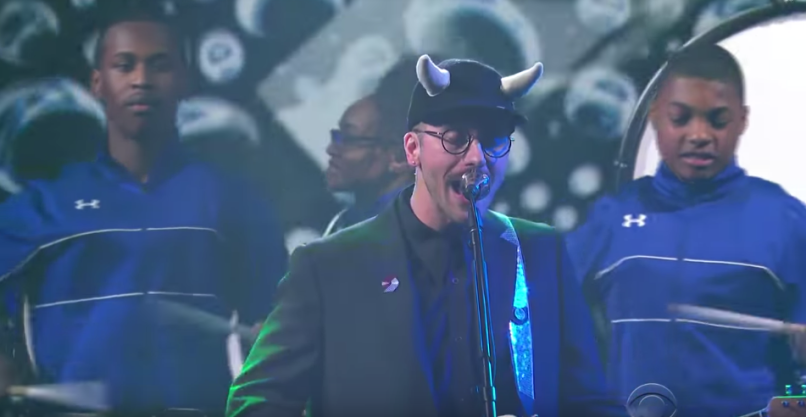 Portugal. The Man perform "Live in the Moment" on The Late Show

Portugal. The Man are coming to the end of their winter tour, something that’s served as something of a victory lap after they won a Grammy for Best Pop Duo/Group Performance. The Satan worshiping rockers took the celebration to Colbert last night, performing their most recent Woodstock single, “Live in the Moment”.

The Alaskan band made their Late Show debut a special one, bringing along the PS22 Chorus and Brooklyn’s BKSteppers drumline to give the song a new shine. The children’s voices added a bit of innocence to the song’s darker undertones as they matched the lyrics with simple hand motions, while the drummers amped up the track’s drive and one player stepped center stage for a solo. Check out the performance below.


Portugal. The Man will wrap up their current tour leg later this month, but they’ll be back on the road for a whole bunch of spring and summer dates. Their schedule also includes appearances at Coachella, Boston Calling, Delaware’s Firefly, New York’s Mountain Jam, and more, and you can find their complete itinerary here. Grab tickets here.

Previous Story
Album Review: Sufjan Stevens Beautifully Captures the Fleeting Romance of Call Me by Your Name
Next Story
Who needs Coachella when you can go Back to the Beach?
Popular
More Stories
[fu-upload-form form_layout="media" title="Submit Your Photo"][input type="hidden" name="ugc" value="1"][/fu-upload-form]