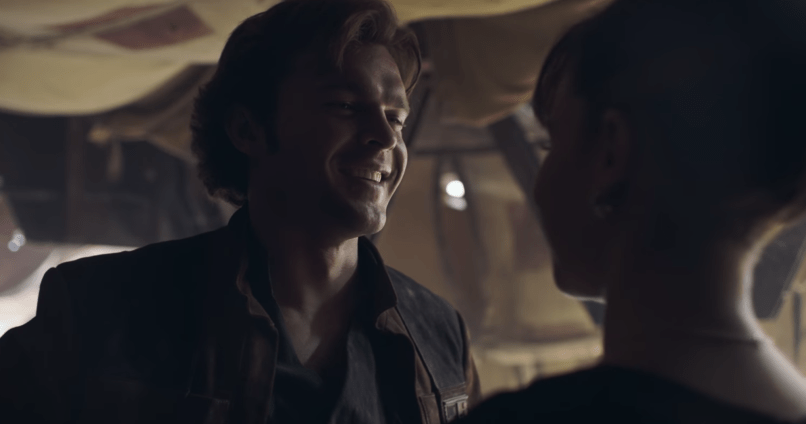 Now they’re back with a longer trailer, which the Mouse House opted to drop on Good Morning America. In hindsight, it was a smart move, seeing how most studios offered short teasers during the Super Bowl with the hopes of people finding the full thing online right after. But, c’mon, nobody is leaving that fun dip and their seat on the couch to watch a trailer. So, this move gives our favorite smuggler a proper spotlight.

Whether it’s earned is a whole other story. (Fool me once, shame on you. Fool me twice, well, never tell me the odds.) Judging from this trailer, it’s quite obvious that Howard has tailored the film enough to Disney’s standards, so those worrying this might turn out to be an Ace Ventura in Space can sit back, relax, and mutter one long, “Alllllrighty then.”  No, this looks like another lighthearted adventure from the mind of Lawrence Kasdan.

Watch above, grab some posters below, and stay tuned for a complete trailer breakdown by our incredibly faithful Star Wars podcast, State of the Empire. In addition to delivering all the news from Alderaan places, the show offers a comprehensive analysis on anything under the Lucasfilm umbrella, from Howard the Duck to Indiana Jones, Radioland Murders to Willow. If it’s got that shiny logo, they’re covering it. Subscribe now.