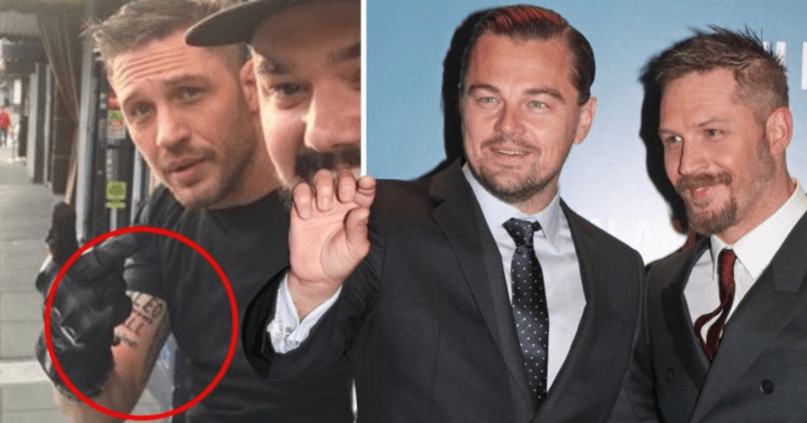 Tom Hardy likes to get tattoos to recognize moments or people in his life. That’s why he’s got both his ex-wife’s initials and his current wife’s name inked on his body. It’s why he promised to get his agent’s name tattooed on the inside of his arm if she ever got him to Hollywood; she did, and he followed through. Now, he’s finally gotten one to commemorate a stupid bet he made with his friend and co-star Leonardo DiCaprio.

As told to Esquire, the story goes that DiCaprio was willing to bet Hardy would receive an Oscar nomination for his supporting role in The Revenant. Hardy was pretty confident he wouldn’t, so he set the stakes at a tattoo of the winner’s choosing to be inked on the loser. Well, Hardy was indeed nominated that year, and so DiCaprio designed the tattoo Hardy would be forced to get.

“He wrote, in this really shitty handwriting: ‘Leo knows everything,'” Hardy recalled. “Ha! I was like, ‘OK, I’ll get it done, but you have to write it properly.'” That meant cleaning it up and changing it to, “Leo Knows All.”

Hardy put off actually getting the tattoo because he knew it was stupid as hell, but new photographic evidence proves he’s finally gone and done it. Photographer Andrew Calisterio recently was doing a shoot with the actor when he asked to snag a cellphone selfie. He posted the picture to Instagram and there, on Hardy’s right bicep, you can clearly see the all-caps words, “Leo Knows All.”

At least Hardy is the kind of man who will stick to his word, no matter the ridiculous consequences. Hey Tom, I bet you a tattoo of your character’s giant tongue that Venom doesn’t do better than The Amazing Spider-Man 2 at the box office. Hit me up.

Check out Calisterio’s snapshot below.

Captured a couple Pictures for @tomhardy today. Fingers crossed 🤞🏼 he posts them. Regardless here’s an obligatory selfie