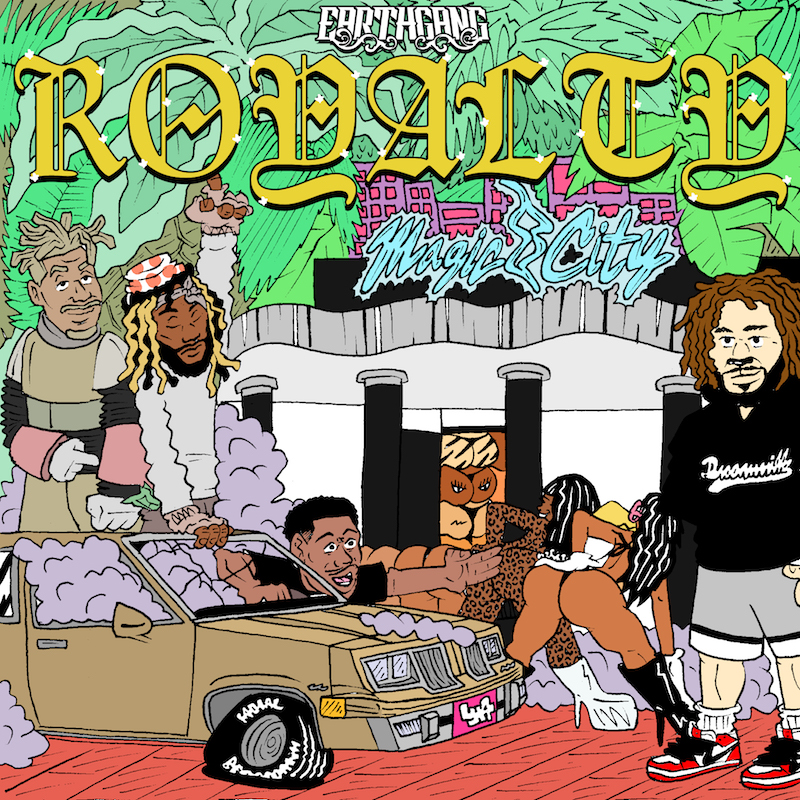 The Lowdown: EarthGang’s Johnny Venus and Doctur Dot inked a deal with J. Cole’s Dreamville imprint in August of 2017, after which they promised a trilogy of extended play releases to precede their highly anticipated full-length debut on the label. The eight-track Royalty EP is the final installment in the series from the Atlanta duo, following the first chapter, Rags, and their subsequent project, Robots. Royalty is a tie-dyed time capsule brimming with the moments, thoughts, and emotions that might plague any buzz-worthy artist on the verge of transitioning from internet fame to bona fide stardom.

The Good: The storytelling on Royalty is extremely personal and matches the heft and intensity of EarthGang’s bars. The EP is as evocative of EarthGang’s humble beginnings and meteoric rise as their colorful ideas about the future. They pilot a steady ship buoyed by lush production — most notably from Childish Major — and the clarity of their respective voices; the southern drawl and swagger they lend to the tape conjures their ATLien forebears of all stripes, but the time-traveling trap punk aesthetic they have perfected is a beast of their own design. That sound finds them poised to unlock the level where everything they touch turns to gold.

The Bad: Beyond the brevity of the project and the presence of DC Young Fly — on three of Royalty’s eight tracks — who could translate as more of a grating distraction than comic relief for some, there isn’t much bad about the project.

The Verdict: EarthGang travels from Atlanta and the tiresome comparisons that plague aspirant rappers from hit-factory towns to their new digs in Mirrorland – a trippy, Wonka-esque alternate reality of the group’s own making where the trees smile, women’s breasts come in threes, and rap prosperity is more than they could have anticipated. The duo’s euphoria at their hard-earned success is tempered by the fates of the people confined to the trenches they have outgrown, which threaten to haunt them on the other side of the looking glass.

Understanding the value of every mile traveled through Atlanta and all points adjacent in pursuit of their dream, they learn that the journey itself is the destination. They end Royalty with a solid investment in savoring the moment that doubles as a set of directions for those on the road behind them with an inkling to follow. With Royalty, EarthGang decisively closes the trilogy and prepares to enter Mirrorland – the world established by their willingness to dream.

Essential Tracks: “Build”, “Off the Lot”, and “LOLSMH”