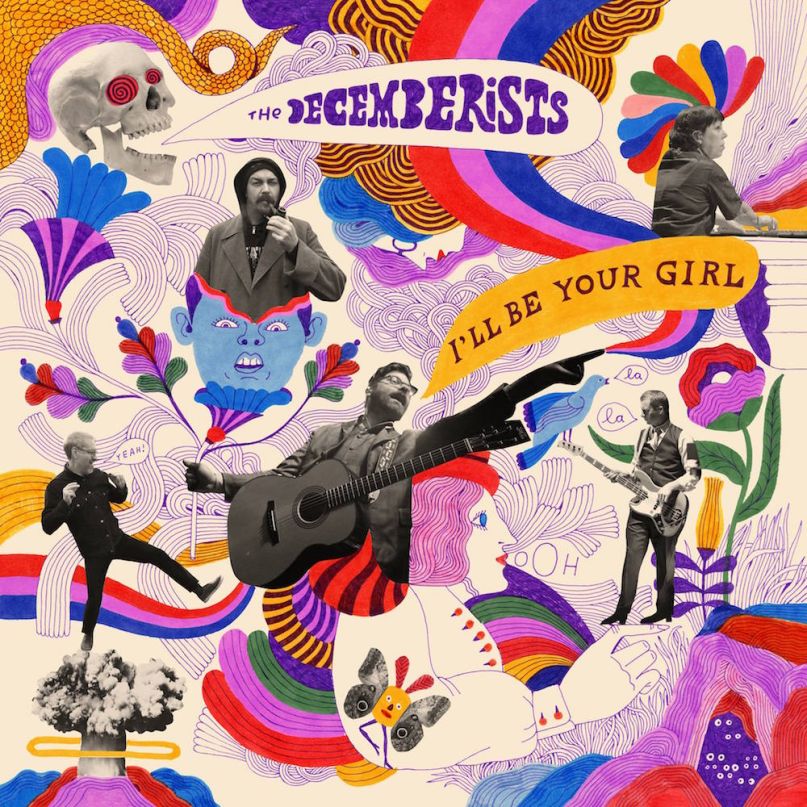 The Lowdown: The Decemberists are taking a step out of their comfort zone with I’ll Be Your Girl, the band’s eighth full-length studio album, and the results are occasionally thrilling but more often either overdone or underworked.

The Good: The single “Severed” at first sounds a little like Colin Meloy being held at gunpoint and forced to front a new wave band. But the combination of his trembling, earthy voice and the dark, pulsing synth is actually unexpected and exciting. Opening track “For Once in My Life” fares just as well as a sign of how The Decemberists can grow as a band. It opens with the strumming of an acoustic guitar, Meloy’s voice clear and intimate as he begs for something to go right in his life. Then, when the song would do well to open wide up and embrace a big, grand feeling … it actually does — with rolling drums and smooth, booming synthesizers. When the band reverts back to its Americana wheelhouse, such as on the eight-minute “Rusalka, Rusalka/The Wild Rushes” and the closing title track, Meloy proves his melodies are as sweet and his lyrics as poetic as they ever have been.

The Bad: As the album progresses, the band’s experiments fall more and more apart. The urgent “Your Ghost” sounds like The Decemberists’ scoring a Spaghetti Western while “Tripping Along” is a song that may leave you feeling very uncomfortable about the word “sticky.” Of the multiple trite anthems on the record, the most egregious is “We All Die Young”, a song that’s more than a little too Sgt. Pepper’s for its own good. It features a children’s chorus and a conspicuous saxophone, which are problems. The song may have played better a decade ago, but in 2018, it feels stale.

The Verdict: You can sense the band’s sheer excitement at producing such a — to borrow a word I learned from the classic Decemberists song “June Hymn” — panoply of sounds. And though it contains a number of experiments that don’t quite work, I’ll Be Your Girl offers tracks that point to a very exciting way forward for the band. Folk sensibilities and gold, old-fashioned acoustic instruments can play really elegantly and stirringly with electronic sounds, and there is a lot of potential if The Decemberists push further in that direction.

Essential Tracks: “For Once in My Life”, “Severed”, and “I’ll Be Your Girl”