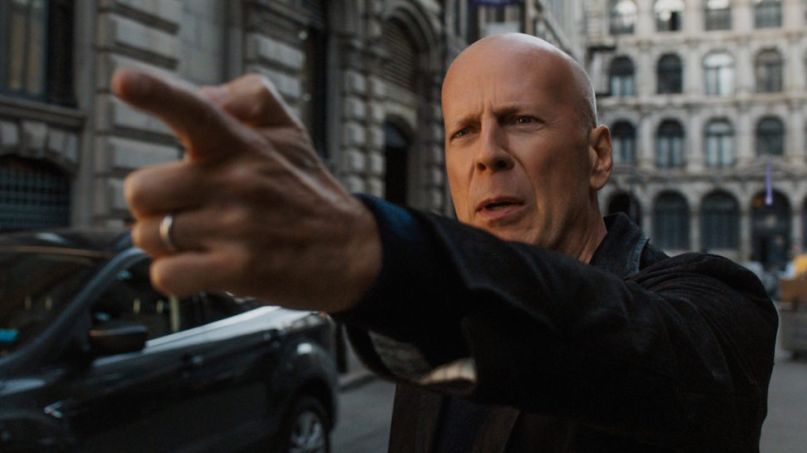 Death Wish is the last movie we need right now. Eli Roth‘s remake of the 1974 original is just as tasteless and tone-deaf as its exploitative trailer promised, with Bruce Willis‘ doctor-turned-vigilante Paul Kersey doling out gunpowdered justice against the milieu of Chicago’s real-life gun violence epidemic after his wife is killed during a home invasion. It’s also gutless. Roth and writer Joe Carnahan — an apropos pairing if ever there was one — repeatedly insert chatter concerning the rising body count in Chicago’s impoverished south side for no other reason than to imply that the city is filled with tatted thugs who need a taste of their own medicine. Truly, in the world of Death Wish, the only thing stopping a bad guy with a gun is a good guy with a gun. One wonders which of the film’s producers is a pseudonym for Wayne LaPierre.

While this approach is most certainly in the spirit of the gun-loving original, it’s fucking exhausting when weighed against our culture’s rising tide of mass shootings and the government’s repeated insistence that the solution is more guns. In Death Wish, gun shops are brightly lit, cheekily advertised, and staffed by beautiful, busty blondes. Jokes are cracked about how easy it is to obtain one, and isn’t it funny how little everyone cares? “Protection” of both the self and one’s family is a sentiment invoked time and again. YouTube tutorials are all it takes to become a proficient killer. And a stroll down a neon-lit city street is all it takes to find someone who deserves to die.

And just like Charles Bronson did in the original, Willis’ Kersey kinda likes killing thugs. He’s brighter and happier. He’s sleeping better. It helps that he’s being called a “guardian angel” by the sobbing black woman he saves from a car-jacking, even if the media has labeled him the Grim Reaper. Real-life radio personalities Sway and Mancow individually discuss the pros and cons of this reaping — Sway, a black man, is against it, while far-right firebrand Mancow is, unsurprisingly, gung-ho — though it’s baffling that Death Wish seems to believe there’s a rational debate to be had about whether or not a white dude gunning down people in the streets is a good thing.

It’s not as if there isn’t a place for vigilante revenge flicks in this culture. The John Wick series, for example, has proven to be a delight, mainly because it cultivates an original world enhanced by a clear directorial vision that frames its ultra-violence as spectacle, not catharsis. Roth has no such vision here; his drab, listless Chicago is either the sunny land of Michael Jordan and deep dish pizza, or a damp cesspool where danger lurks around every corner. It’s an outsider’s vision of Chicago and, as such, lacks any sense of perspective or familiarity. You can’t just mention Lollapalooza. You can’t just mention Lake Shore Drive.

But here’s the thing: Though Roth fails at establishing an immersive sense of atmosphere, his direction really comes to life during the film’s grand setpieces, whether it be a shootout in a seedy bar or showdown in a garage. It’s here that his gory sense of ingenuity — the spark that made films like Cabin Fever and Hostel 2 so perversely watchable — begins pooling toward your toes. His use of practical gore effects, and the unwavering eye he applies to sadistic torture, should be satisfying for fans of his previous shockers. Sequences such as these also place his stamp on what might otherwise be a rote, offensive remake of a film that has no purpose being revived today. Say what you will about Roth as a cultural entity, but the enthusiasm he brings to upholding the gore of yore remains distinctive.

Roth’s early work was inspired because it existed in its own bubble. He wasn’t trying to make a statement. Like the movies he grew up on, it was gore first, story second, and message a distant, distant third. Were that also the case with Death Wish, the movie would probably function as a perfectly fine, if mostly forgettable, vigilante flick. But there’s something distinctly odious about a storyteller exploiting both a city’s tragic reality and a country’s debate about firearms to make a film that thrives on violence.