Film Review: Gringo Recalls the Stylish Crime Films of the ’90s, For Better and Worse 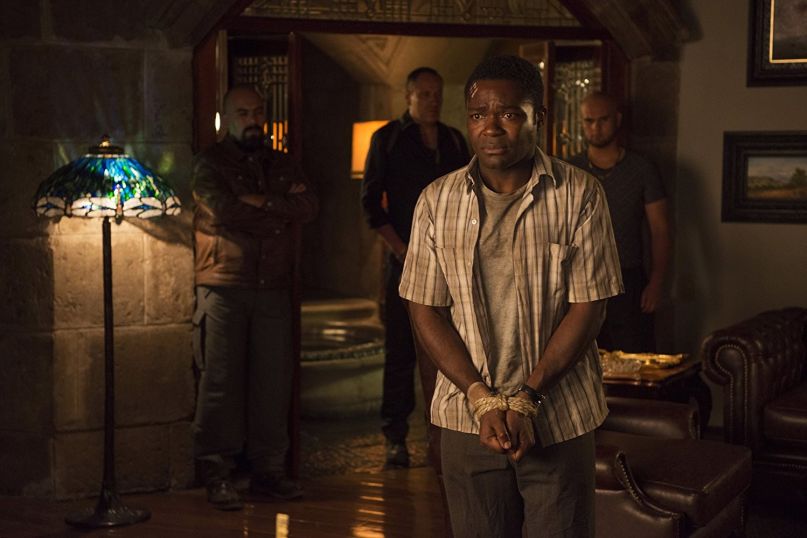 The Tarantino crime comedy is, in many ways, a lost art – the flood of bloody, witty, ensemble-driven capers in the late ’90s gave audiences everything from The Way of the Gun to The Big Hit. Its characteristics are unmistakable: rapid-fire dialogue with quips flying as often as bullets, a cadre of contemporary character actors playing gangster, and a deep well of edgy cynicism on which to hang these affectations. In many ways, Gringo hearkens back to these frenetic, unmistakably misanthropic pictures for both good and ill, capturing everything that was charming – and deeply obnoxious – about that subgenre.

Gringo’s major innovation is its choice of everyman – David Oyelowo, who’s carried the brand of respectable, stoic character actor since his breakthrough role as Martin Luther King Jr. in Selma. He plays Harold Soyinka, a mild-mannered middle manager at Cannabax, a pharmaceutical company developing a ‘weed pill’ for medical marijuana users. (This development gets little play in the driving action of the film, a frustrating development.) His unhappy wife Bonnie (Thandie Newton) is cheating on him with his boss/best friend Richard Rusk (Joel Edgerton), who accompanies Harold on a business trip to their factory in Mexico with type-A business partner Elaine (Charlize Theron). A few mishaps and a missed plane later, Harold finds himself a target of the Mexican drug cartel, and – surprise, surprise – Richard and Elaine squirm their way out of paying the ransom. This leads to a lengthy chase involving the DEA, Richard’s ex-mercenary brother (Sharlto Copley), and a young white couple (Amanda Seyfried and Harry Treadaway) on a mission to smuggle some Cannabax pills back into the States, with the hapless Harold trapped in the middle.

For his second feature, stuntman-turned-filmmaker Nash Edgerton (Joel’s brother), who impressed with 2008’s Aussie thriller The Square, does his best to wrangle the many twists and turns in Matthew Stone and Anthony Tambakis’ script. Over the course of the film, Harold finds himself in the crosshairs of not one, but five different factions, each with their own reasons for detaining, killing or saving him – sometimes by the same character. It’s a lot to juggle for filmmaker and audience alike: after the seventeenth double cross and twentieth case of mistaken identity, it’s helpful just to throw one’s hands up and surrender to the ride.

Gringo sports a fascinating cast, a roster of international movie stars not usually known for comedies. In a normal world, Kevin Hart would get the Oyelowo role; but, to his credit, the thespian throws himself into the run-down everyman nature of Harold, showing a wackier side to his acting arsenal that he should explore in more irreverent works. Edgerton does his best to spice up his bro-ey executive, who’s torn between a sense of obligation to the kidnapped Harold and a desire to increase his own bottom line, but Stone and Tambakis give him little to do beyond squirming under the pressure of the plot. Treadaway, Newton, and Seyfried are especially misused, slumming it in basic, cookie-cutter roles which land a few passes short of integrating more smoothly into the plot.

Some cast members fare a bit better: Sharlto Copley’s mercenary is a beardy ball of quirks perfect for Copley’s twitchy skillset, and he bounces wonderfully off Oyelowo in the all-too-brief time they’re onscreen together. Theron, meanwhile, struts and smirks her way through the film, making great use of the comedic instincts she rarely gets to utilize outside the odd season of Arrested Development. Elaine’s the kind of oversexed female executive that was a cartoon even in the ’90s, and it’s weird to see that character type replicated here. Still, Theron makes a big, gaudy show of it, and it’s entertaining to watch her eviscerate every scene she’s given.

Not that the movie gives its cast much to gnaw on: Gringo’s obvious debt to the works of Tarantino and the Coen brothers give it a tone that’s too arch and haphazard to keep the audience rooted in its characters. The movie’s sense of humor is about twenty years too old, manifesting in glib jabs at other characters’ expense for being fat, or mentally challenged, or poorly-endowed (most delivered by Theron’s smarmy quip machine). One running gag involves the Mexican cartel leader’s passion for The Beatles, the kind of first-draft pop culture callback that evinces the deep dives of Tarantino without any of the wit. All of this might be more forgivable if the characters were more than a group of unscrupulous half-wits whose sins are irredeemable from the jump, but Gringo gives its audience little to latch onto.

Gringo is distributed by Amazon Studios, which is honestly the perfect home for it. It feels assembled about a decade too late by executives who saw the streaming metrics for Pulp Fiction and The Way of the Gun and decided to make a movie to fit snugly in those film’s “If You Liked…” recommendations. It’s difficult to imagine the kind of person who would actively seek out Gringo in a movie theater, instead of consuming it on a lazy afternoon after idly scrolling through their watchlist and just landing on it out of sheer boredom. In this context, Gringo’s not half bad, a perfectly disposable way to spend two hours on the couch. Any other viewing experience might feel like a waste of time.