The beloved YA novel gets a rousingly successful, and kindhearted, Hollywood adaptation 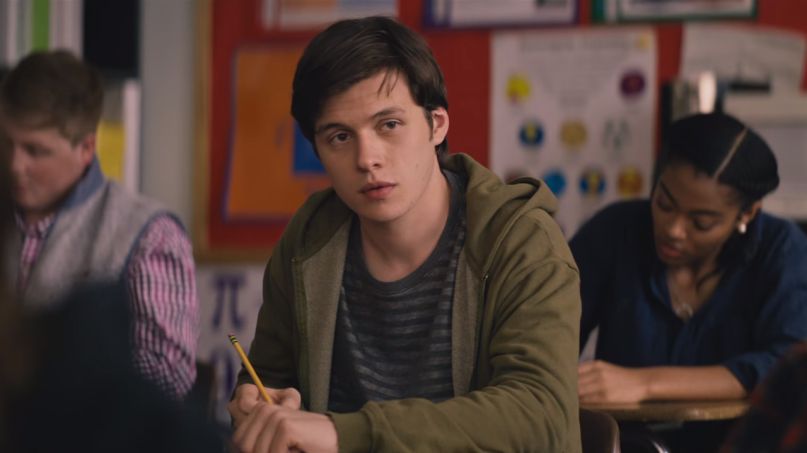 There’s this sweet, almost electric way that art can hit you as a teenager. You’ll be listening to a song, or watching a movie, or reading a book, and suddenly there’s this slow sort of jolt. It’s lightning, if lightning were a wave coming in, or a thunder clap, if thunder were also a flower unfurling. You hear or read a line, a phrase, and it’s exactly how you feel — exactly. These lines or scenes or moments get underlined, transcribed onto book covers, passed on in scribbled notes or earnest emails. You experience them, and you feel seen.

That’s key to both the plot and the significance of Love, Simon, a winning adaptation of Becky Albertalli’s young adult novel Simon vs. the Homo Sapiens Agenda, brought to the screen by television super-producer Greg Berlanti and screenwriters Elizabeth Berger and Isaac Aptaker (both of NBC’s This Is Us). Simon’s love story begins when he reads one such line, written by an anonymous classmate, but it’s likely that Love, Simon will also give that wonderful jolt to some of the young people who see it. There are two reasons for that. First: it’s good. Really good, even. It has its flaws, but the overall effect is so charming, so sincere, and so surprisingly thoughtful that it’s hard to dwell on its flaws. Second, and more importantly: some of the people who feel that jolt will be feeling it because, for the first time, they’ll be seeing themselves in a fluffy, mainstream romantic comedy.

Simon (the terrific Nick Robinson) leads a charmed life, described to us in what seems, at first, to be a monologue. Gorgeous, brilliant parents (Jennifer Garner and Josh Duhamel) who “didn’t peak in high school,” a sister he loves, wonderful friends (Katherine Langford, Alexandra Shipp, and Jorge Lendeborg Jr.) — the list goes on. He’s also gay, and it’s a secret that ensures he’s spent years living his life as though he’s been “holding [his] breath,” as one character puts it. When he sees an anonymous post from a fellow student that describes this exact feeling, he takes a risk and sends an email — about leading a charmed life with gorgeous parents, wonderful friends, and a secret. One email becomes many, and as Nick begins to fall for this stranger, another student stumbles onto their correspondence and everything — Simon’s romance, his friendships, and his own view of himself — gets a lot more complicated.

That last note makes the film sound darker than it aims to be. Berlanti and company don’t shy away from the ugliness of life entirely — Simon’s generally lovable dad makes a few relatively tame jokes about homosexuality, and every time, we watch the pain flicker across Simon’s face so quickly it’s clearly routine. There’s some real cruelty to be found at school, as there always is in films like these, but the school’s only openly gay student (Clark Moore) nearly always gets the last word (and laugh) on the bullies. That’s fairly indicative of the way most of the film’s darkness is approached. It’s there, and it hurts, but there’s never any doubt that a chance to laugh and clap and cheer is coming down the pipe, particularly when the school’s vice principal and theater teacher (Tony Hale and Natasha Rothwell, both unsurprisingly excellent) get involved.

(Read: It’s Time We Talk About Who Teen Sex Movies Are For)

Still, that’s how things go in stories like these. There’ll always be room for movies like this, effervescent coming-of-age comedies where love is both the point and an afterthought, where heartache is both guaranteed and temporary. Love, Simon belongs on the shelf next to Mean Girls, Legally Blonde, and 10 Things I Hate About You, among many other such teen- and college-aged stories. It could also nestle relatively comfortably next to The Edge of Seventeen and Lady Bird, though it lacks the former’s sharp bitterness and the latter’s Laurie Metcalf. It also makes a few more missteps than those last two, namely in making the “love” in Love, Simon a key part of the film’s denouement. Berger and Aptaker’s whip-smart screenplay makes one significant error: in making a worthy attempt at getting the party started right off the bat, the film rushes right past the ‘falling in’ part of love, making it much harder to connect with Simon’s romance than it is to connect with Simon himself.

The latter is remarkably easy, given how good Robinson is and how thoughtfully Berlanti and the screenwriters approach him. The former presents more of a problem, though the film’s clever approach to the mystery of his paramour’s identity does somewhat make up for the lack of that early emotional connection. Albertalli’s novel relies heavily on the emails between Nick and “Blue,” and Berlanti deals with the problem of having an anonymous co-narrator by allowing that role to be filled by whichever classmate Nick imagines might be the object of his affection. As more information rolls in, the role is filled by Bram (Keiynan Lonsdale), Cal (Miles Heizer), Lyle (Joey Pollari), and others, each adding their own sweet but slightly wounded spin to a kid desperately afraid of what will happen when he’s finally himself. It’s a smart way of turning what could be a weakness into a strength, and gives each of those young actors a chance to step into the limelight temporarily.

It’s not the only inventive flourish. Simon’s imagination shapes much of what we see, so “Blue” is always pictured in a warm blue light, a fantasy based in another kid’s reality. A fantasy sequence of kids coming out to their parents as straight gets more than a touch of melodrama, a joke that’s also a quiet indicator of Simon’s anxiety about his own coming out. And delightfully, Simon’s picture of life in college makes for a colorful pride parade, albeit the tamest pride parade you’ll ever see. These and other clever little touches elevate what could otherwise be easily dismissed as a piece of too-earnest wish fulfillment, giving us a deep, potent sense of who Simon is, what he needs, what he fears, and who he loves.

At the end of the day, that’s what really matters with Love, Simon — the Simon part. Warm and wonderful though the inevitable happy ending is — at the screening this writer attended, it was one of several moments to draw cheers from the audience — it’s not the film’s real endgame. In making a light, easygoing, heartfelt teen rom-com with a gay kid at its center, Berlanti and company have made a top-tier example of a familiar form with one essential and very important difference. Should you stumble into someone who questions if gay kids really need Love, Simon, it’s probably best to ignore them. If you can’t or won’t, however, you can tell them this: every kid out there can determine whether or not they need this film, but each of them, gay or otherwise, absolutely deserves a confection this sweet, thoughtful, and sincere.