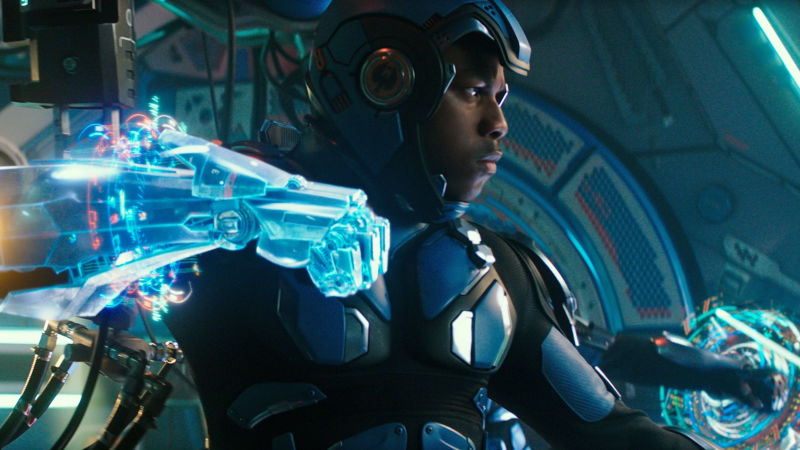 To be a denizen of the world of Pacific Rim must be exhausting. When one threat is extinguished, another emerges; if an ally is made, surely a new enemy must be just around the corner. It’s easy to sympathize with them, as they hurl themselves into the cockpits of giant robots or out of the giant toxic monster feet, but not for the reasons you’d assume. After watching what feels like six films in one, if there’s a feeling that’s easy to conjure, it’s exhaustion.

Pacific Rim: Uprising is 20 minutes shorter than its predecessor, but it feels a hell of a lot longer. As directed by Steven S. DeKnight and scripted by DeKnight, Emily Carmichael, Kira Snyder, and T.S. Nowlin, it’s a stitched-together mess of a film, made from scraps of what might be appealing stories if the camera bothered to linger on them for more than a few minutes. When it succeeds, it does so on charm (mostly John Boyega’s) and pure, base thrills, the kind you expect from watching enormous beasts battle it out in the cities that become their bouncy castles. When it fails, as it mostly does, it’s because Uprising can’t decide what it wants to be, other than awesome — and it’s only sporadically that.

Some 10 years prior to the events of Uprising, as the film helpfully reminds us, the Earth was terrorized by otherworldly monsters called kaiju. They were sent through a breach in the Pacific Rim by an alien race called the Precursors, who hoped to use them to clear out the planet. Humanity fought back with giant robots called Jaegers, eventually closing the breach through which they entered our universe, thanks to the sacrifice of General Stacker Pentecost (Idris Elba), who blew himself up to save the planet. Now his son Jake (Boyega) is trying to leave his father’s legacy and the wars of the past behind him, but a chance encounter with an illegal Jaeger-building prodigy (Cailee Spaeny), a reunion with his old partner (Scott Eastwood), and the machinations of a weapons technology developer (Tian Jing) seem primed to pull him back into the fold.

That may seem relatively tidy, but it’s not. As soon as Jake Pentecost gets back inside a giant robot, the film begins to spread itself thin, and it never really stops. It’s as though each of the film’s credited screenwriters had an idea of what the central story should be, but they never bothered to sit down together and make sure that any one of their stories was getting enough time. As such, Uprising plods around like the giant robots that occupy so much of its space, moving too quickly to let almost anything resonate emotionally, but not quickly enough to lend much of an adrenaline rush. Instead, it’s the bones of three or four different movies, scattered like the floppy, oozing limbs of a kaiju among the wreckage of endless buildings.

Against all odds, there are scenes that work, and they all involve John Boyega. Stepping into Idris Elba’s shoes is no small feat, but Boyega’s considerable warmth and affability go a long way to making any investment in the story possible. When the film slows down and centers on Jake Pentecost, it snaps into focus, becoming an effective (if simple) tale of a young man haunted by loss, who connects with a kid who’s also haunted by loss. Then they save the day. If that had been the story, bolstered by Boyega’s knack for drawing an audience in and winning them to his side, then Uprising might not have been great, but it would at least be palatable. But Uprising is much less interested in that or any other of its stories than with coming up with 27 new ways to have robots crash into skyscrapers.

This is where we arrive at the gravest of the latest Pacific Rim’s many sins: not even the robot fights are any good. I repeat, not even the robot fights in the robot fighting movie are any good. Bad fight choreography is an all-too-common weakness in blockbusters of late, but here it’s particularly egregious. One early sequence, more a chase scene than a fight, is easy to follow, but from there on out, we’re only permitted to catch whatever move DeKnight and company have decided is cool enough to make clear. A Jaeger gets whipped in a circle, taking out every building in a robot-length radius. A Jaeger unleashes what can only be described as a trash whip, snapping up rubble from the street to swing at an opponent’s head. And at one point, Pentecost and Nate Lambert (Eastwood) prepare us for their signature move, which must surely be awesome — and then their Jaeger kind of slides on the ice under another Jaeger’s outstretched arm. The movie believes this manuever to be epic. This writer preferred it as performed in The Mighty Ducks.

For reasons that won’t be spoiled here, the promised kaiju take their sweet time turning up, but by that point, not even a truly absurd plot twist (spiked with a drop too much meta-commentary) can keep Uprising from sinking under its own weight. The aim here seems to have been to mimic what worked last time, while making it all bigger. What DeKnight and his team seem to have forgotten is that Pacific Rim didn’t work because it was big. It worked because it was fun, full of imagination, and had a beginning, a middle, and an end. It would be easy to forgive some shoddy plotting if that same spark were present, but it’s not. It would be no struggle to overlook the overzealous special effects and stomach-churning insistence on treating the camera like a rubber ball, were the story actually any good. Not even John Boyega, try though he might, can make up for both.

What makes a fight compelling onscreen isn’t the motion of a punch. It’s what spurs the punch, what the punch means, how it feels, and what happens after. If the punch also looks cool, so much the better. Punching isn’t enough by itself. Not even when the punchers are robots.