Film Review: The Outsider Offers Little Beyond Its Impressive (and Familiar) Visuals 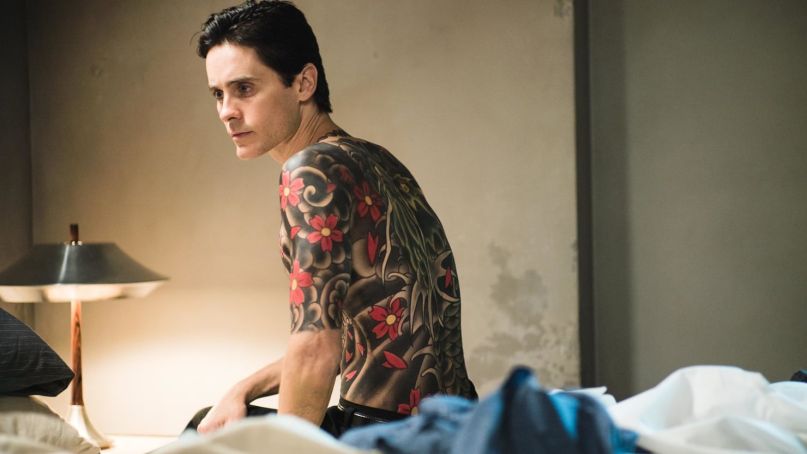 What is it with gangsters and toes? Or pinkies? Or breaking thumbs? Okay okay, it’s got a name – Yubitsume, and it’s got history. To atone, crimesters shorten fingies as a small bit of collateral meant to show you that mean business, and are willing to go further, but like – but when a bad boy gangster offers his pinkie tips over a bad deal, what’s the other gangster gonna do with that fingertip? A finger is useless to debtors or scorned enemies. They gonna ice it until retribution? Bring it to a pawn shop? Cook it in a soup? Just saying – Stalin thought dead bodies truly solve problems, so don’t delay. Perhaps this is more thought than the process deserves, but cool it with the fingers, guys.

Anyway, The Outsider is a baloney movie. Competently shot and well-edited it may be, but when it’s more fun to let the mind wander to the business of severed digits than watch Jared Leto’s deep, blank eyes as he passively ascends the crime syndicates of 1950s Japan? It’s a snooze. A slice and a miss, you could say. Eastern Promises, Le Samourai, The Yakuza it ain’t. Councilman Jeremy Jamm from Parks & Recreation who’s “like, really into Asian stuff right now,” it kinda is. It’s clichéd, distant, afraid to truly immerse itself in anything but long looks, but at least it looks good. And that’s that.

Leto is Nick, a hirsute POW in Japan, incarcerated for reasons never explained. He befriends Kiyoshi (Tadanobu Asano), an enigmatic and curiously likable man with deep mob ties. One very gross and graphic escape plan involving seppuku later, Nick is now in the company of criminals and brought into the fold of Kiyoshi’s gang. He’s an errand boy, a sudden instrument of violence, and the subject of racial disparity among factions because nobody likes this wild card from another country. Leto looks, kills, looks again, and postures with strategic blood splatters across his trendy outfits (save for the occasional shirtless moment to highlight his growing body of tattoos). Standing out like an ivory dagger, he bludgeons a man’s head in with a typewriter on orders, smashes glass into other guy’s heads a la Begbie in Trainspotting, and he even falls in love with Kiyoshi’s sister Miyu (Shioli Kutsuna). Oh brother.

If the plot feels somewhat broad or hazy, it’s not necessarily because the film’s hard to follow, but because director Martin Zandvliet slowly reveals it through opaque strokes. There’s not much to The Outsider. Diegetic sound often fades in favor of a synth-and-tone heavy score with long shots of things like sumo fights, Mikado shows, and Osaka evenings with neon glows. Zandvliet doesn’t seem particularly interested in the internal politics of the Yakuza, or their history, or their culture. Rather, the film is an accumulation of neat (read: “exotic and foreign”) looking things that suggest nothing of Nick’s internal monologue, growth, or motivations beyond what he barely acknowledges. Kills. Women. Isolation. All through Leto’s sunken, intense eyes. Such pensive. So Last Samurai.

Details are left unimportant when there are so few. And the look, the feel, the way that Leto is framed in confident disbelief as violence surrounds him? Well, that’s not very important either. One could conceivably turn the sound off the and get the gist. It’s vague, but still predictable storytelling. Of course, there are turf wars, and a will-they-won’t-they romance for Nick and Miyu, but it amounts to little as so much damn time is focused on the Leto Look. Are the fights fun? They’ll satisfy gorehounds. The romance is cheesy, and unearned to boot.

However, if we can backpedal a moment, the film’s aforementioned minimalism isn’t the worst thing. The worst thing is the smell of Leto’s vanity wafting from the project; “Damn, I’d look cool in a tight suit holding a samurai sword,” Leto had to have thought to himself at some point during development. Plus there’s the general impression of star ego, and the film’s refusal to immerse in Japan beyond the most surface-level tropes. And there’s the unwieldy run time. And that predictable plotting. Those are the worst things. Wait, this paragraph was supposed to be complimentary.

Zandvliet at least assembles the film with a modicum of care, and he tries to strip it down in curious fashion. Clint Eastwood once talked about something called a ‘cruel cut’ – a tactic he borrowed from Spielberg – where once a workprint of a film is assembled, start chopping. How much exposition and time-wasting stuff can you rip out before the film becomes nonsense, while trying to maximize the ever-elusive “cinematic, visual storytelling”? The Outsider dances around this conceit, and it’s probably better off for it. The music by Sune Martin, with its requisite pulsations and digital sounds, sure beats any hefty scenes of dialogue featuring the guy who growled out a six-minute Joker two years ago. And DP Camilla Hjelm still finds cool blues, blacks, and night-lit city scenery that are at least worth a look.

The Outsider is Nick, and perhaps that’s the film’s most fatal flaw. We’re never allowed near the guy, and Leto’s not the type to draw you in or emote. He’s too alien. Eastwood was able to sell men like these as lost outlaws in tons of Westerns. (Robert Mitchum nailed a similar sense of disciplined intrigue in Pollack’s The Yakuza.) But Leto’s boyish face, bulbous eyes, and waifish, affectless form amounts to little. His protean t-shirt and lack of affect is supposed to lend an ironic everyman quality to counter the graphic violence, but even that’s been done before in hundreds of other Westerns, samurai flicks, and actioners.

This being a Netflix film, consider other options instead. Perhaps there are Japanese-made gangster flicks that might be more fun. (Takeshi Kitano, an icon of the genre, can be seen in Brother, Outrage, Zatoichi, and other works on the ‘Flix right now, as of this publication.) Or perhaps there’s a two-hour documentary about the pinkie trade, and why crooks are so fascinated by toes and fingers and other pieces of flesh. Any of this would be more interesting than that damned Outsider.