Film Review: The Strangers: Prey at Night is a Quick, Bloody Slasher Throwback

10 years later, the now-series has its premise boiled down to its nastiest essence 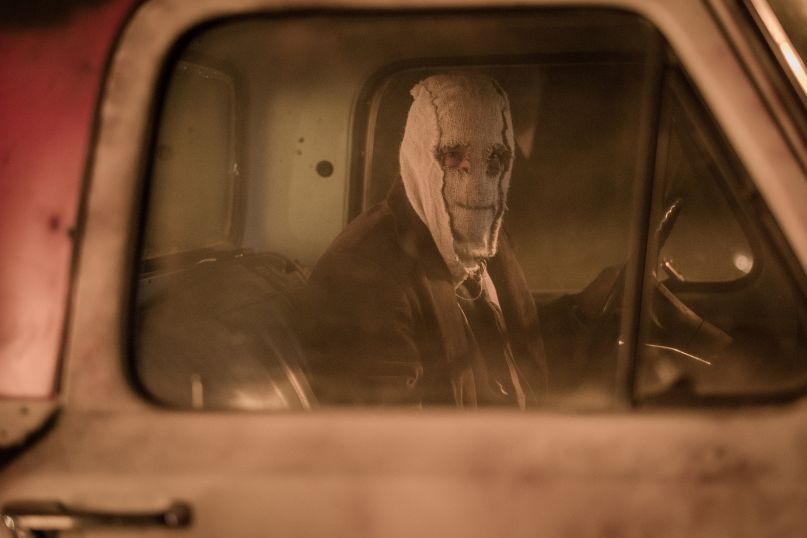 On the surface, 2008’s The Strangers was a relatively unremarkable slasher, the tale of an unsuspecting normal couple ravaged by mysterious, masked attackers in their home. Nonetheless, it proved not only a financial success, but an interesting artifact of post-9/11 horror: there’s no deliberate motive with The Strangers, no sad backstory, just the unpredictability of their choice of victims, and the horror of their their gruesome business. With The Strangers, first-time director Bryan Bertino crafted a work that was at once deeply indebted to exploitation flicks of the 1970s and harrowingly current. Nearly a decade later, along comes the film’s sequel, The Strangers: Prey at Night, a straightforward slasher that retains the sense of competent horror craft, but ditches virtually everything else that made the first film interesting.

Like the first, Prey at Night claims to be “based on true events,” and its premise is as stripped-down as could be. This time around, the Strangers’ targets are a family of four – concerned parents Cindy (Christina Hendricks) and Mike (Martin Henderson), and their two kids, Kinsey (Bailee Madison) and Luke (Lewis Pullman). In the film’s opening minutes, we learn everything we need to know about the family: Kinsey, with her ripped Ramones T-shirt and love of cigarettes, is a nebulously rebellious teen who’s about to be sent off to boarding school, much to her family’s consternation.

Hoping to take their minds off their troubles, the family sets out on a road trip to spend the weekend with Cindy’s aunt and uncle in their isolated, lakeside trailer park. Once they arrive, however, they find the fog-enshrouded locale completely devoid of people, save a group of attackers decked out in kitschy masks and burlap sacks, who proceed to chase, smash and slash the unsuspecting family unit with wild, grindhouse abandon. Rinse and repeat.

With Prey at Night, one gets the impression that Bertino (returning to co-write the film with Ben Ketai) knew that the Strangers’ novelty was difficult to replicate the second time. Their solution? Saturate everything in winking ’70s-’80s style pastiche, complete with Stephen King-esque title cards, droning synth from composer Adrian Johnston, and audaciously on-the-nose use of ’80s pop ballads (“Kids in America” and “Total Eclipse of the Heart” are two such needle-drops of which the filmmakers are particularly proud). The first Strangers affected the generic templates of ’70s slasher flicks, but Prey at Night leans on them like a crutch. Visual comparisons to Friday the 13th and The Texas Chainsaw Massacre are abundant and unapologetic: characters use cell phones, but the zooms, split diopters and grainy filmic feel of the cinematography crib heartily from retro horror aesthetics. Simply put, Prey at Night sacrifices its own identity to drench horror audiences in throwback familiarity.

But on the other hand, there’s something admirable about the back to basics approach affected by Prey at Night. From the get, director Johannes Roberts (47 Meters Down) abandons all pretense of heightening his horror film with dramatic subtexts and characters with more than one dimension – this is midnight movie fare through and through. The film’s lead family is as thin as wallpaper, giving talented actors like Hendricks and Henderson precious little to do besides play concerned mom and dad to their more resourceful moppets. Pullman, as the jock son of the family, is a useful idiot who gets a few licks in, but it’s Madison who gets the lion’s share of righteous moments. Of the four, she gets the most to work with as she flees and outwits the Strangers, but Laurie Strode she ain’t.

As for the Strangers themselves, they serve a similar function as last time, but cut a less imposing silhouette. Granted, they still manage to appear and disappear like magic whenever they’re needed, and occasionally display Michael Myers-esque levels of invulnerability, but they seem a bit more neutered this time around. Liv Tyler and Scott Speedman were barely able to stop them in the first, but Hendricks and family get the drop on them, or successfully evade them, far more effectively than you’d expect for their presumed omnipotence. Most disappointing is their greater ethos, or lack thereof – the scariest moment of the first Strangers is Liv Tyler asking them, “Why are you doing this?!” which yielded a frighteningly mundane answer: “Because you were home.” A similar question is asked of these predators in Prey at Night, and Bertino’s twist on that answer this time around is dissatisfying, to say the least.

While it’s disappointing to see Prey at Night abandon the artistic sensibilities that elevated the take-no-prisoners suspense of the first Strangers, the sequel’s pivot into empty pastiche may actually be the right direction for the series to go. With this cast and crew, a more cerebral exploration of the Strangers might have missed the mark, failing at delivering the kind of psychological torment that was so effective in the first movie. Instead of going back to the well, the Strangers series simply reinvents itself as a small, muscular thrill ride, leaning on the mercurial nature of the Strangers as its central appeal. To its credit, it sets about its modest ambitions in admirable form – its setpieces are suspenseful, and it manages to approximate the first film’s rapidly accelerating sense of abject dread. What’s more, at 87 minutes, Prey at Night never threatens to overstay its welcome. It functions adequately as a moment-to-moment dread dispensary, pure empty calories.

With films like It Follows and The Babadook now dominating the conversation, there’s a clear market for horror films with subtextual bite. Prey at Night is categorically not one of those films, sacrificing depth for economical slashery and a heavy ’80s paint job. Its goal is nothing more than to scare the pants off you and remind you of its inspirations, and it definitely succeeds in that respect. Just don’t expect something so paint-by-numbers to turn into a Picasso.