Film Review: Thoroughbreds Captures the Lifestyles of the Rich and Amoral 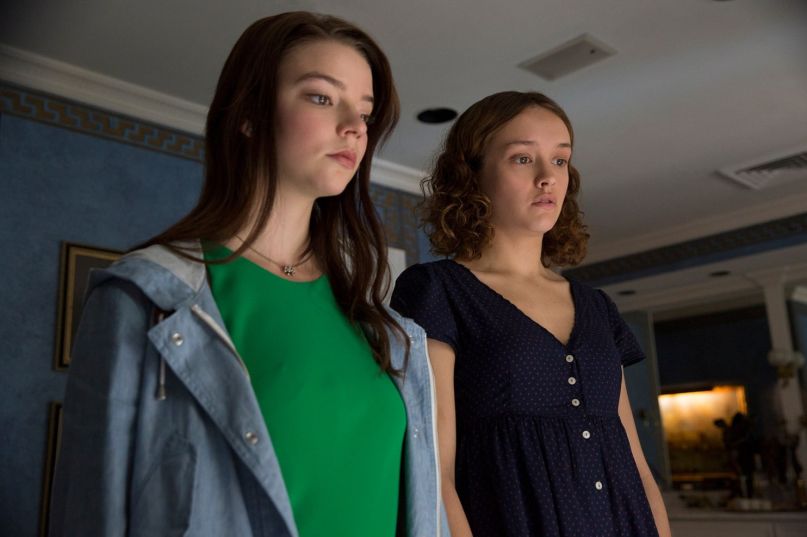 “I’m not necessarily bad,” says Amanda (Olivia Cooke) near the beginning of Thoroughbreds. “I just have to work harder at being good than most people.” By any textbook definition, Amanda is a sociopath. She experiences the wiring-level human emotions, like hunger or exhaustion or pain, but not the other ones: anger, love, sadness. This isn’t to say that Amanda is wholly incapable of considering the big picture; if she can’t quite experience empathy, she can at least distinguish between a good idea and a potentially terrible one. In writer-director Cory Finley‘s taut, confident debut feature Thoroughbreds, that distinction becomes crucially important from early on.

Good ideas are typically had by those in level circumstances, and if only on sight, you’d think the young women at the center of Thoroughbreds would struggle to have anything other than good ideas. Amanda and her estranged friend Lily (Anya Taylor-Joy) lead lives of nearly overwhelming privilege in Connecticut, at least in terms of houses and opportunities and the like. They spend their days bored and rich, but where an oft-alluded-to incident involving Amanda and a horse has turned her into a social pariah, Lily is part of the region’s elite. It’s not as though Lily doesn’t have problems, though. Her mom is a virtual non-entity in her life, enjoying spa days and in-house tanning beds, while Lily has to contend with her prickish stepfather Mark (Paul Sparks) and his increasingly patronizing manner. As Amanda soon quickly learns, not all is as it seems with Lily’s comparatively idyllic life.

So when Amanda suggests an Occam’s Razor solution to Lily’s ongoing home problems, Lily is at once repulsed and, more quietly, a little bit intrigued. Thoroughbreds soon splits off into all manner of seriocomic directions (though Finley’s screenplay absolutely hews toward the former half of that phrase), but it’s that tension between Amanda’s affectless pragmatism and Lily’s temperamental flights of venom that dictates the film’s best scenes. In what’s ultimately a character study about two young women in very different kinds of turmoil, Cooke and Taylor-Joy imbue their respective antiheroines with the kind of felt energy that sets noteworthy films apart from their passable contemporaries.

Cooke plausibly draws out the muted pain at Amanda’s center; when she’s asked to consider her purpose in the world, the actor adopts a thousand-yard stare, as though she’s never fully contemplated the question. She’s certainly unwell, at least by conventional measures, but there’s a yearning for honesty and candor that belies the flat punchlines Finley sets up for her. Meanwhile, Taylor-Joy carries enough secrets behind her endlessly expressive eyes for both. She negotiates a difficult balance between youthful vulnerability and quiet menace even as she struggles with the morality of her and Amanda’s plan. When they enlist Tim (the late Anton Yelchin) in their plot, even a small-time drug dealer has Lily made from the jump. He asks if she wants to hold his gun, and Taylor-Joy’s body language practically scrambles out for it even as the actor plays coy.

Finley’s direction matches the performances to a T, coupling Erik Friedlander’s unnerving kettle drum-and-dissonant string score with austere long takes, marginalizing Cooke and Taylor-Joy within endless opulent spaces as often as possible. The house in which much of the film unfolds is a cipher, a lushly decorated pile of nothingness filled only with the young womens’ planning and the endlessly grating noise of Mark’s rowing machine in another part of the mansion. Thoroughbreds finds several moments of strangling tension, particularly when the plot inevitably begins to unravel, panicked heads prevail, and Finley manages to induce genuine doubt about Lily, Amanda, and their mutual futures. Granted, at times the film makes that dread a bit too pat; when Thoroughbreds ultimately reveals itself as a riff on madness in its myriad forms, the way in which Finley resolves the film feels more like a blunt explanation than the allusive mystery it spends much of the runtime illustrating.

Still, Thoroughbreds testifies to just how easily the auspices of its rich environment can curdle into deceit and cruelty, particularly when backs begin to be pushed up against lushly decorated walls. Amanda describes a “technique” for conveying humanity, where she can induce a convincing crying fit by pressuring her throat and diaphragm in the right way. But while Finley’s film may be slim on any truly insightful commentary about what makes Amanda and Lily tick, that’s almost beside the point. Instead, this is a film about the fine lines separating civility from chaos, and how it only takes a tiny push to send you across when you’re close enough to it. Money may not be corrosive in and of itself, but it’s certainly a fast road to the ill nature within us all.