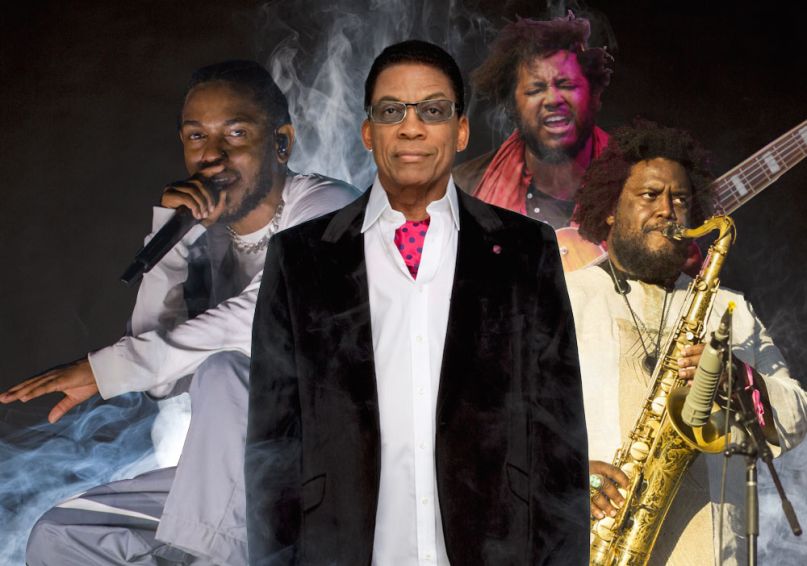 Herbie Hancock predicted he’d have a new album out by the end of 2016. Unfortunately, the year came and went without a peep of new music or further details on a proper drop date. Now, in an interview with The San Diego Union-Tribune, the jazz fusion legend has given fans a promising progress report on his first full-length since 2010’s The Imagine Project.

Of particular note is the long, varied, and impressive list of collaborators he called on to assist him in the studio. According to the 77-year-old, listeners can expect to hear Kendrick Lamar, Thundercat, Flying Lotus, and Kamasi Washington on his forthcoming album. The four artists are apt choices, as they’re all well acquainted with Hancock’s genre-bending, experimental style — especially Kendrick, whose masterful To Pimp a Butterfly played an important part in bringing the worlds of jazz and hip-hop closer together.

Snoop Dogg will also appear, along with African guitarist Lionel Loueke, tabla maestro Zakir Hussein, and saxophonist Wayne Shorter, with whom Hancock played as part of the Miles Davis Quintet back in the ’60s. Tasked with helming together all of these different musicians and styles is producer Terrace Martin, known for his excellent work on both Kendrick’s TPAB and untitled. unmastered. mixtape.

Although Hancock, a 14-time Grammy winner, is a master at his craft, he’s picked up quite a lot from his younger collaborators. “I’m learning a lot from the young people I’m working with,” he told SDUT. “Because they built the new structures, social media and that whole arena, and that affects how you get things out in front of the public to let them know you’re working on something… So I’m still learning, which I’m very happy about,”

Regarding the album’s themes, Hancock’s assortment of special guests reflects his messages promoting diversity and collaboration. “I want to make records that point toward the concept of bringing people together and working toward encouraging people to aspire to be global citizens, and not just American citizens, or Italian citizens or Japanese citizens,” he explained. He continued,

“To be global, or world, citizens is vital. Because that’s what we’ll be facing in the future and this whole thing of pitting one country against another — that stuff has to die. So, one way to do that is if you have people from different cultures, races, ethnicities and backgrounds in general, and put them together. They can come up with something no single person could possibly come up with… We need to dialogue. Music is dialogue to musicians and that’s how you can solve a lot of problems we have in the world today, through dialogue and mutual respect. So, if anything, those are the hidden messages in my new recording.”

Hancock still doesn’t have a firm release date on the forthcoming album, but he’ll be incorporating bits of new music into his upcoming live performances.