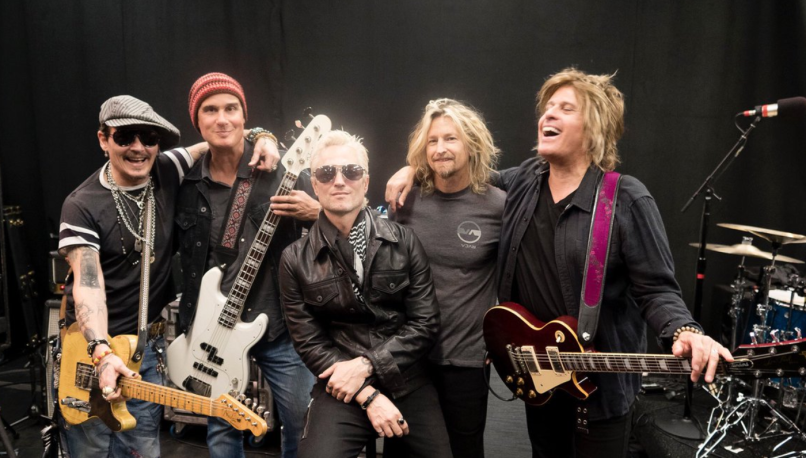 With his Hollywood career being put on blast in the wake of domestic abuse allegations and altogether unfortunate public comments, Johnny Depp seems to have retreated into the world of music. In addition to playing with rock supergroup the Hollywood Vampires, Depp’s been seen dueting with Bono and starred in a pair of Marilyn Manson music videos. The actor indulged his hard rock bonafides again last night when he took the stage in Santa Clarita, CA, with Stone Temple Pilots.

Depp joined the grunge outfit for a performance of “Sex Type Thing” and a cover of MC5’s “Kick Out the Jams”, the latter of which found MC5’s Wayne Kramer also taking the stage. Depp, who plays with STP bassist Robert DeLeo in the Hollywood Vampires, popped up on DeLeo’s Twitter account a few days ago. “Had a dear friend come by yesterday for the last @STPBand rehearsal,” it read, likely meaning that Depp’s cameo was planned.

Had a dear friend come by yesterday for the last @STPBand rehearsal… photo by @RossHalfin pic.twitter.com/dsZKigZ4bx

STP recently announced a new, self-titled album, their first with vocalist Jeff Gutt, that’s due out later this month. Maybe Depp will cameo on the album, too? Regardless, his appearance at last night’s show was likely meant to hone his live skills in advance of the Hollywood Vampire’s upcoming European tour, which kicks off in late May and runs through July. See how he’s doing with the below clips from the concert.

.@STPBand kicking out the jams with Wayne Kramer of the MC5 and Johnny Depp…????????#StoneTemplePilots pic.twitter.com/XLTLK9BRaP