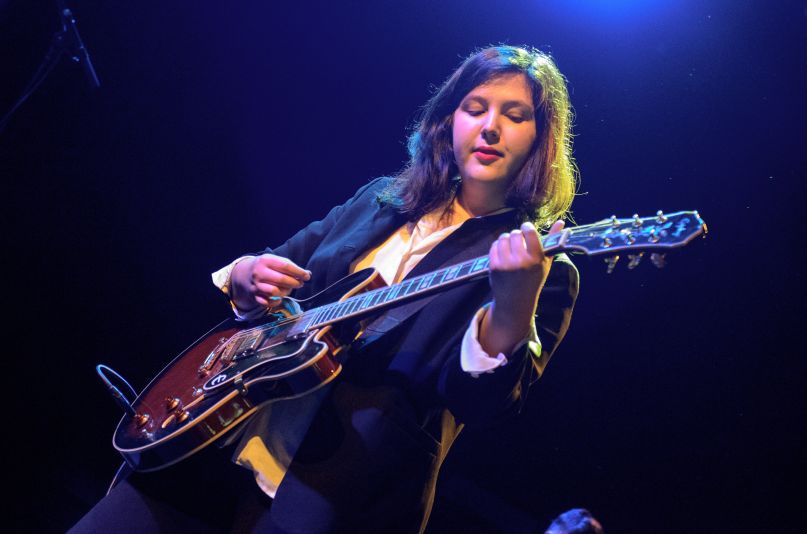 Setting the Stage: Friday saw Lucy Dacus release her sophomore album, Historian. The Richmond, Virginia, native faced a manner of pressure that’s assecome familiar for burgeoning singer-songwriters: After putting out a buzz-worthy bedroom debut (2016’s No Burden), the artist must prove they’re no fluke by delivering an impressive follow-up from within the constructs of the studio industry. Anyone who’d gotten a chance to sit with Historian prior to last night’s record release show at Brooklyn’s Music Hall of Williamsburg knew that Dacus had stunningly exceeded any possible expectations. Staying intimate while expanding Dacus’ sonic scope with vexed folk (“Yours & Mine”), horn-accompanied modern indie (“Addictions”), and electrifying blues rock (“Timefighter”), Historian is going to find itself on plenty of year-end lists. Dacus is proving herself a musician of managed, measured confidence and perspicacity, which raised hopes for an impactful tour kickoff.

Taking the Stage: Dacus played Historian almost entirely front to back, with the exception of closing with the opener/lead single, “Night Shift”, and saving the title track for the encore. Even without the gorgeous touches of strings and horns featured on the record, the rich artistry of the new material was immediate and authentic. Dacus’ performance was subtle and effortless, with no pretense to distract from what has to be one of the purest, sturdiest young voices today. She seemed so approachably unassuming, dressed in a $3 thrift store blazer with her Epiphone guitar and casual smile. Yet, for all the nonchalance of her delivery and presence, there was no lack of power; in fact, the apparent reserve only served to make the set’s incendiary moments (the final build of “Body to Flame”, the back half of “Night Shift”) that much more dynamic.

That One Song: “Timefighter” made a strong case for best of the night before Dacus closed her set of new material with “Pillar of Truth”. Dedicated to her father, who was in the crowd, the song demonstrated all that is wonderful about Dacus and her live show. Opening with just her and her guitar, it began with a sentimental emotionality sans saccharinity. Stepping forward after the second chorus, the band built upon the song as it headed towards its ripping conclusion. There was a perfect blend of intimacy and rousing movement, which well defines both Historian and Dacus’ talent.

Let Me Introduce the Band: Bassist Sadie Powers’ fretless instrument and mallet technique were cool, but guitarist Jacob Blizard was perhaps the most technically impressive instrumentalist up there. (My opinion may be colored by his being straight in front of me). His solos were fierce, and he made full use of his pedals and effects buttons galore, especially on the loop-heavy “Map on a Wall”. This is the guy whose college project kick-started Dacus’ career, so cheers to him sticking around.

Quoteworthy: “You will never know how much it means to me that you’re here. Thank you for coming to this birthday party for my baby that I care so much about.” — Lucy Dacus, before she began her set.

Setlist:
Addictions
The Shell
Nonbeliever
Yours & Mine
Body to Flame
Time Fighter
Next of Kin
Pillar of Truth
Map on a Wall
Dream State…
I Don’t Wanna Be Funny Anymore
Night Shift
Encore
Historian