Noel and Liam broke into Gladys Tomlinson's Manchester home in 1989 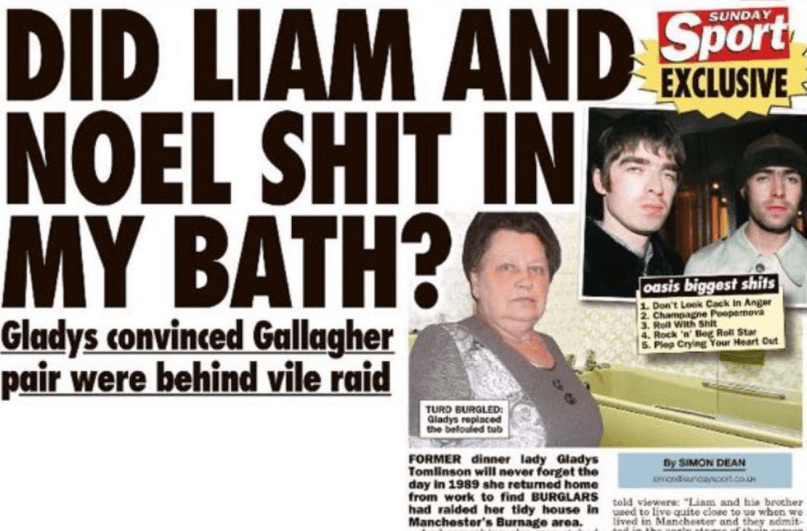 Liam and Noel Gallagher Accused of Shitting in a Bathtub

Lest we forget there was a time when Noel and Liam Gallagher got along as brothers typically do. At one point in their lives, they weren’t just bandmates in Oasis — they were also accomplices in a string of neighborhood burglaries. A new back page feature in the Sunday Sport newspaper details how Noel and Liam were known to break into homes in their native Manchester during their early years in Oasis. British TV host Richard Madely was one of the brothers’ alleged victims; during a recent segment on Good Morning Britain, Madely revealed that the brothers later admitted their guilt to him. After hearing of Madely’s experiences, another former neighbor of the Gallagher’s, Gladys Tomlinson, realized that she too may have been a victim of the brothers’ terror.

As she told Sunday Sport, in 1989 she returned home to find her “knick-knacks and video” stolen. What’s more, the culprits had taken a shit in her bathtub. “They was beyond the pale,” Gladys remarked, adding: “Pound to a penny that it was one of them that shat in the old bath.”

In response to the article, Noel Gallagher has taken to Instagram to personally apologize to Gladys. “It’s a fair cop guv’,” he wrote. “We thought it was Richard Madely’s gaff. Soz Gladys. No offence.”