Ranking: Every Decemberists Album from Worst to Best

With a new LP out, we sort through Colin Meloy and co.'s trove of albums once more 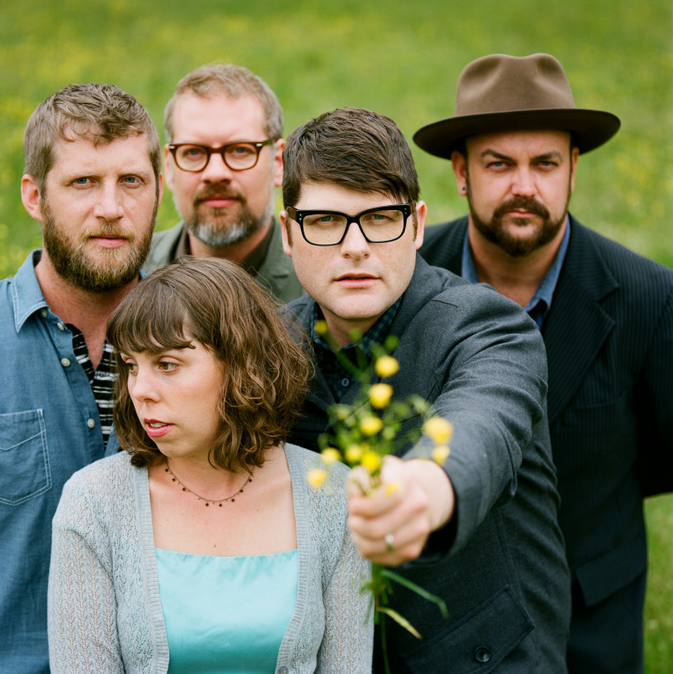 “Ranking” might be a moot title for this article, because The Decemberists don’t have a single bad record in their discography. You could also say it’s pointless to categorize their work in the first place since it all follows the same solid formula of old-timey musicality, Dickensian vocabulary, and highfalutin storytelling. But we’d argue that while every Decemberists album does indeed feature these things, it’s to differing degrees and always done with a specific mission in mind. Luckily, we’ve outlined these slight changes in temperature for you, from the dark outcast sympathy of Castaways and Cutouts to the country leanings of The King Is Dead. Where future albums will land on the spectrum is anybody’s guess, but we can almost guarantee it will be a variation on a theme we’ve come to love.

While The Decemberists’ debut, Castaways and Cutouts, was never anything short of literary in its aspirations (and is a more solid set of songs front-to-back), Her Majesty the Decemberists was the band’s first release that could truly be called theatrical. For hard evidence of this, look no further than the seven-minute manifesto “I Was Meant for the Stage”. With the help of horns, keys, strings, and bells, Colin Meloy and company spin tales on Her Majesty that maintain the richness of their previous works (the 5 Songs EP and Castaways), but also bring their musicianship and lyricism to new heights. Songs like the sly “The Soldiering Life”, about men who are more than just battlefield comrades, showcase Meloy’s ever-expanding vocabulary — “bombazine” is just one of the words on Her Majesty that no indie rock lyricist had ever employed and probably never will again (it’s an archaic fabric made of silk and/or wool, in case you were curious). As exciting as it was to see The Decemberists best themselves on 2005’s Picaresque, they could’ve laid down their instruments after Her Majesty and still have had a rich body of work to be proud of. –Katherine Flynn

There are undoubtedly some critics, and even longtime fans, who will be skeptical of the whole shebang. Lead singles “The Wrong Year” and “Make You Better” are the most accessible, radio-friendly pop tunes that the band has ever recorded — if you need any further proof, I can attest to hearing the latter in a Starbucks last week. (Can you imagine anyone playing “A Cautionary Tale”, from 2002’s Castaways and Cutouts, over the loudspeaker in a corporate coffee chain?) “But we’re not so starry-eyed anymore,” Meloy sings over lush major key piano chords and nice, orderly guitar notes. For those familiar with Decemberists tunes, the sentiment of becoming disillusioned with the blush of first love but continuing to love the other person anyway is, at first, perplexingly simple. Meloy isn’t calling your mother a whore in a roundabout way this time; he’s just reflecting on being married and having a couple of kids.

This shift is, at first, a little jarring. For much of his career with The Decemberists, Meloy has eschewed using his own life as source material for his lyrics, opting instead to mine Civil War history, Japanese folk tales, obscure ‘60s pop records, and the entire Western literary canon. Even ostensibly first-person narratives like “Los Angeles, I’m Yours”, from 2003’s Her Majesty The Decemberists, retain an air of distance, a degree of separation. For many music fans, this was undoubtedly both refreshing and liberating; after all, who needed another weepy, confessional song about heartbreak? That narrative thrust was what set The Decemberists apart and made them engaging in a completely different way from their contemporaries. In the more personal songs on What a Terrible World, that degree of separation is gone, replaced by a newfound intimacy. Some may relish the peek into Meloy’s life, but others might be disappointed by the ordinariness of the man behind the curtain. –Katherine Flynn

The Decemberists took a step out of their comfort zone with I’ll Be Your Girl, the band’s eighth full-length studio album, and the results are occasionally thrilling but more often either overdone or underworked. You can sense the band’s sheer excitement at producing such a — to borrow a word I learned from the classic Decemberists song “June Hymn” — panoply of sounds. And though it contains a number of experiments that don’t quite work, I’ll Be Your Girl offers tracks that point to a very exciting way forward for the band. Folk sensibilities and gold, old-fashioned acoustic instruments can play really elegantly and stirringly with electronic sounds, and there is a lot of potential if The Decemberists push further in that direction. –Kayleigh Hughes

Though I’ve never heard anyone argue it’s The Decemberists’ best album, The King Is Dead might be the most accessible, hitting No. 1 on the Billboard 200 thanks to a cast of cameos that included singer-songwriter Gillian Welch and R.E.M. guitarist Peter Buck. According to Meloy, the band’s sixth album reflects a retreat from the lavish British progvfolk that underpinned Picaresque, The Crane Wife, and The Hazards of Love in favor of more stripped-down American folk influences. Seeking to craft “first-person meditations, rather than third-person fantasies,” Meloy penned many of the album’s 10 tracks while settling into his new home amidst Oregon’s Willamette River and Tualatin Mountains. “January Hymn” and “June Hymn” are both firmly rooted in these surroundings, as is the harmonica-drenched “Don’t Carry It All”.

Likewise, “Down by the Water” — brimming with an accordion, harmonica, Peter Buck’s 12-string, and Welch’s resounding vocals — sounds fulsome but never turgid. “This Is Why We Fight” chronicles the wastes of war with an icy clarity, while the country closer, “Dear Avery”, sends us off with meandering pedal steel and angelic female harmonies. A tight album with almost no filler, The King Is Dead has The Decemberists breaking away from their signature sound to try something new. –Henry Hauser

Two Christmases (or Decembers!) ago, I told a friend I had just watched my second-favorite Batman movie, Batman Returns. “Ah,” he nodded. “When Burton goes total Burton.” “Exactly!” I said, before he told me he actually hated the film. Regardless of our differing views on its quality, we both agreed it was The Dark Knight at his most extreme, an unapologetic story where all of the things fans love — and hate — about him get brought to the forefront in grotesque, gothic glory.

So if we’re talking about The Hazards of Love in cinematic Batman terms, this would be the record where Meloy goes full Meloy. Sure The Crane Wife took The Decemberists’ love of yarn-spinning up a tier by featuring two songs about the same Japanese myth, but Hazards is a full-blown rock opera with a complete beginning, middle, and end to its long-form narrative. Your feelings toward the tale of forbidden love between a young woman and a sylvan shape-shifter — not to mention Chris Funk’s Sabbath-esque guitar theatrics, the multiple character voices, and a choir of ghost children — largely depend on your taste for the histrionic. But love it or hate it, the band’s unwavering loyalty to their vision demands respect. After all, how many true rock operas have there even been in the 21st century? –Dan Caffrey

Castaways and Cutouts opens with a song told from the perspective of a dead girl. Leslie Anne Levine’s mother “birthed me down a dry ravine,” she tells us, and the combination of macabre, vivid lyrics, and whimsical accordion tell you most of what you need to know about The Decemberists’ debut. In between Leslie Anne’s unfortunate story and the dreamy escapism of “California One / Youth and Beauty Brigade” at the close, Colin Meloy and his cohorts sketch a number of lushly detailed (albeit ominous) pictures, from a mother of dubious profession (“A Cautionary Song”) to romance in impossible situations (“Here I Dreamt I Was an Architect”) and an especially morose New Year’s Day (“Grace Cathedral Hill”). Despite the general cloud of gloom, Castaways still showcases some of the sharpest and most enjoyable storytelling in The Decemberists’ catalog, and lays the groundwork for more ambitious triumphs such as Picaresque and The Crane Wife. –Katherine Flynn

Her Majesty and, to an extent, Picaresque both contained a few allusions to existing pieces of literature (“Song for Myla Goldberg”, “Of Angels and Angles”, etc.). But on The Crane Wife, Meloy gets more epic, pulling from a Japanese myth for the multi-part title track and Shakespeare’s The Tempest for the 12-and-a-half-minute “The Island”. Unlike The Hazards of Love, however, The Crane Wife‘s stories are simple enough to enjoy without having to read along on the lyrics sheet, making it the most user-friendly Decemberists album (other than maybe The King Is Dead) to new fans. Also, while the tale at the center does involve a shape-shifting crane, the words stay rooted in the difficulty of marriage and romantic expectation, a topic that far more of us can relate to than a transmogrified bird. –Dan Caffrey

Kicking off with a cathartic shriek, Picaresque is The Decemberists’ most extravagant and brazen offering, at least musically speaking. Anchored by the delightfully outlandish lyrics of Colin Meloy and Chris Funk’s instrumental bag of tricks (hurdy-gurdy, bouzouki, and mountain dulcimer all make an appearance), the band’s third album earned them universal critical acclaim and an instant cult following.

But whereas the equally spectacular Hazards stuck to one story, Picaresque covers an insane amount of ground. Evoking impending doom and the blinding ecstasy of love, frantic violins frame a star-crossed couple’s struggle on “We Both Go Down Together”. Unable to reconcile his sweetheart’s sordid past (“tattooed tramp”) with the stifling expectations of an elitist patriarch, the singer finds suicide to be the couple’s only form of salvation: “And while the seagulls are crying/ We fall but our souls are flying.” There’s also a self-conscious ditty about athletic incompetence (“The Sporting Life”), a diatribe on the rigidity of socioeconomic hierarchies (“The Engine Driver”), and an eight-minute gypsy rock saga chronicling naturalistic calamity, exploited kindness, and masochistic retribution (“The Mariner’s Revenge Song”).

“16 Military Wives” is another notable entry as, unlike Picaresque‘s other songs, it takes its inspiration from real life, serving as an anthemic rebuke of President Bush and the media’s lame response. Backed by a majestically swirling organ, Meloy belts out in righteous frustration, “If America says it’s so/ It’s so!/ And the anchorperson on TV/ Goes la-di-da-di-da-didi-didi-da!” Touting a more sparse arrangement, closing track “Of Angels and Angles” finds the singer sounding wounded and exposed over nothing except a gentle acoustic guitar. It’s a fitting testament to an album whose diversity not only defined The Decemberists, but inspired a whole generation of Pacific Northwest folkies. A full decade later, its reverberations are still being heard. –Henry Hauser