Plus, 10 Things the Los Angeles string quartet love about the psychedelic rockers 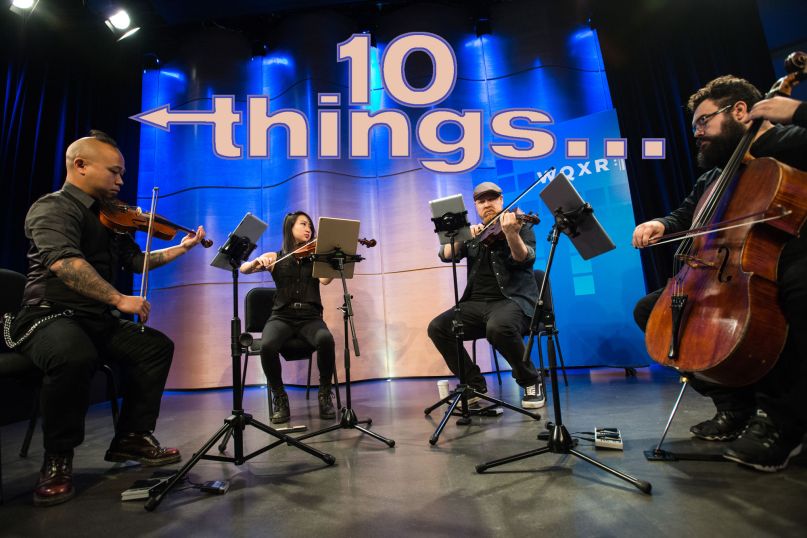 10 Things… is a recurring new music feature in which an artist digs deep into a particular topic.

The Vitamin String Quartet love music, and not just their own. The Los Angeles string quartet have built a career out of reworking their favorite tracks across myriad genres into sumptuous, symphonic renditions that often cull new resonances from timeless tracks. They’ve previously remade tracks from the likes of David Bowie, Lorde, Kanye West, Lady Gaga, and Bruce Springsteen, and now they’ve taken their bows to something a touch weirder. For Record Store Day, Vitamin String Quartet have tackled two of The Flaming Lips’ most enduring tracks: “Do You Realize??” and “All We Have Is Now”.

Using only two violins, a viola, and a cello, the outfit has added another beam of color to the Lips’ kaleidoscopic aesthetic. The grandeur of the original cuts, both of which come from 2002’s Yoshimi Battles the Pink Robots, is given a different texture here, one that maintains the band’s inherent whimsy while indulging the songs’ melancholic undercurrent.

The songs are coming on a Record Store Day 7-inch on April 21st before hitting digital retailers on the 27th. As an early tease of the unique release, you can stream VSQ’s version of “Do You Realize??” below.

In further celebration of The Flaming Lips, Vitamin String Quartet brand manager Leo Flynn and project director James Curtiss have shared 10 Things they love about Wayne Coyne and co. Though the string quartet is known for covering a vast range of artists, the deep cuts, obscure references, and promotional stunts they cite below demonstrate the depth of the band’s fandom.

Gah, what an opener. This cut, a remix of a song that would reprise at the tail end of its album, might be one of the greatest track 1’s of all time. So immediate, so bold, both lyrically and sonically. The Soft Bulletin is often cited as one of the best albums, not only of the ‘90s, but in the whole of rock and pop. This song is one of the biggest reasons why.

Their Craftsmanship:
No matter how tripped-out a Lips tune is on the surface, there are always super-strong musical ideas, guitar riffs, bass lines, what have you, underneath it all, propelling things forward. Despite an occasional air of frivolity (see below about a particular gummy artifact), the music of The Flaming Lips is very much built to last.

They Want To Work With Everybody and Everybody Wants To Work With Them:
Collaboration is a sure-fire sign that a musical act just wants to play. As such, Wayne and the boys might be the most playful musicians in the history of pop music. Seriously, who haven’t they collaborated with? Erykah Badu, Yoko Ono, Phantogram, Nick Cave, Biz Markie, Henry Rollins, Bon Iver, Peaches, My Morning Jacket, Miley Cyrus; if you haven’t collaborated with the Lips, you were probably dead at the time.

The “Mystery Act” at The Peach Pit After Dark:

Back when the Lips were in danger of being forever regarded as a one-hit wonder with the “novelty” song “She Don’t Use Jelly”, they decided to just embrace their success and take a guest spot performing their hit in an episode of Beverly Hills 90210. We’re all the better for it, as the musical moment is a wonderful time capsule of all that was good (the Lips) and all that was god-awful (it starts with Kathleen Robertson’s hair) in 1995.

Wayne’s Grays:
The Lips frontman reminds us all that age is no excuse.

Yoshimi Battles the Pink Robots: The Musical:
For the handful of fans who got to see the sadly short run of this show at La Jolla Playhouse, it was revelatory. Big and bold, the show was 99% sung, structuring its narrative around songs not just from the titular album, but from other Lips releases. It was a love story filled with whimsy, melancholy and giant robots, just like any Flaming Lips show ought to be. Here’s hoping it might find a revival sometime in the near future.

The Lips never met a silly idea that they weren’t willing to push to the Nth degree. This 2011 release featured four songs, on a USB drive, in a gummy brain, which was encased in a gummy skull. And, yeah, those four songs were never released anywhere else. Only The Flaming Lips could get away with ephemera like this.

Zaireeka:
Back when the Lips decided to release their 8th album as four separate CDs that you would have to play simultaneously, it was seen as yet another tripped-out exercise from an oddball band that thrived on tripped-out exercises (case in point: the compilation album they put out that they called Finally the Punk Rockers Are Taking Acid). But, man, talk about creating art that demands a communal experience. In honor of that, we’d like to propose four different VSQs, together on one stage, performing this mythical quadraphonic album and let’s get Wayne to conduct the whole thing!

“Halloween On the Barbary Coast”:
Here, in one song, buried on the lesser-known 1992 (though it should have been 1991) album Hit to Death In the Future Head, you can hear the birth of so much of what would be celebrated as indie rock in the 21st century.  All the freak-folk, neo-psych, art rock, whatever; it starts here. Also, the title is so evocative of a time and place all us weirdos would to want to be part of, that it’s kind of funny that lyrically it turns out to be about the Lips guys spending too much time in Vegas in the ‘80s.

The wonderful 2014 documentary details the lives of collectors, fans, and musicians who are obsessed with Christmas music. It’s a wonderful showcase that treats its outsider subjects with genuine love and interest. In it, Wayne talks not only about the joys and sorrows surrounding the holiday, and in turn the music that generates, but also about how the search for a holiday movie that never existed, described to a very young Wayne by his mother, led to the creation of The Flaming Lips’ own Christmas film, Christmas on Mars.