While the Getty’s Good: Why We Need Both FX’s Trust and All the Money in the World

Fact: There's always room at the table for Danny Boyle and Ridley Scott 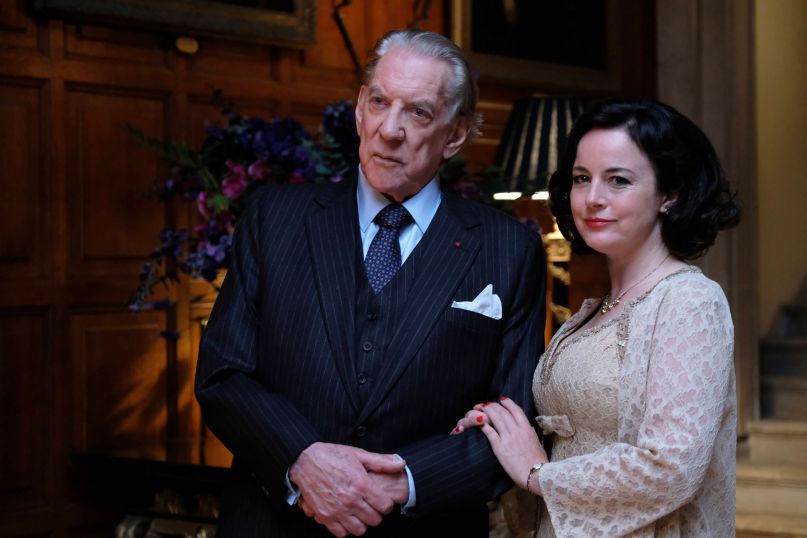 In 1973, John Paul Getty III, the handsome, curly-headed heir to the Getty Oil fortune, was kidnapped in Rome. Upon receiving a ransom note demanding $17 million for his safe return, the boy’s grandfather, billionaire oil tycoon J. Paul Getty, announced his response: that he would pay “not one solitary cent.”

The story of J. Paul Getty’s lavish lifestyle, and his inhuman response to his grandson’s kidnapping, has been a subject of fascination for decades. But it seems to hold special importance now in an era where another over-the-top, idiosyncratic billionaire is the most powerful man in the free world. It’s fitting, then, that we’re getting not one, but two retellings of the Getty kidnapping in the space of four short months.

FX’s upcoming 10-part miniseries Trust, directed by Danny Boyle and written by regular Boyle collaborator Simon Beaufoy (Slumdog Millionaire, 127 Hours), seeks to tell the story of Getty’s kidnapping, and the impact it has on the rest of the Getty family, in Boyle’s signature, energetic style. However, Trust invariably lives in the shadow of last December’s Ridley Scott film All the Money in the World – one may wonder whether one negates the other.

However, there’s an argument to be made that both stories justify their existence – not in spite of, but because of the proximity of their respective releases. Each version has a different spin on its major players, the way their filmmakers tell the story, and (most importantly) the messages it conveys to its audience.

The enigmatic, larger than life figure at the center of both Trust and All the Money in the World is J. Paul Getty, the spendthrift oil tycoon who values money more than anything, but who doesn’t have a penny to spare. In All the Money in the World, Getty is played by Christopher Plummer, receiving an Oscar nomination for his last-minute replacement of Kevin Spacey in the wake of numerous sexual assault allegations. In Trust, Getty is played by the stone-faced film and TV veteran Donald Sutherland.

Paul Getty’s a meaty, showy role played by two veteran actors, so it’s no surprise that the embody the role with two disparate, but equally compelling, portrayals. Plummer’s Getty is irascible and intense, Scott painting him as a grumpy, Scrooge-like isolationist who prefers the company of his art collection and stock ticker to other human beings. We only ever see him in intermittent check-ins with other characters, almost always by himself, surrounded by his possessions – a picture of the isolating nature of greed.

Sutherland, meanwhile, imbues his Getty with a much more devilish sense of theatricality, his Sutton Place behaving more like the camp stylings of Dynasty than Downton Abbey. His Getty is a man who truly believes he owns the world, hoping to shape it to his liking – right down to his harem of beautiful women with whom he has ritualistic, regimented sex (sometimes with the aid of experimental virility drugs injected directly into his, erm, oil rig). If Plummer’s Getty is Scrooge, Sutherland’s is Caligula, with a healthy dash of King Lear thrown into the mix.

In a drama filled with charismatic figures, it’s Gail Getty (nee Harris), John Paul’s mother, who has the thankless role of projecting normalcy amid all the madness. In the early episodes of Trust, Hilary Swank doesn’t get much to do as Gail besides hover by the phone, waiting for news of her son’s kidnapping. That said, she projects an admirable intensity and doggedness, even if the first few installments of the show have yet to see her at the forefront of the story.

While Trust plays all the angles in depicting the circumstances of John Paul Getty III’s kidnapping, All the Money places Gail firmly in the role of protagonist. Scott’s version of John Paul’s mother (played brilliantly by Michelle Williams) portrays her as a woman in a lifelong ideological battle of wills against J. Paul Getty, of which her son’s kidnapping is but the latest chapter. With her clipped Grace Kelly affect, and a razor-sharp understanding of how to play the media to her advantage, Williams’ Gail is a force to be reckoned with, even when pitted against one of the richest men in the world. In fact, her poverty may well be her most formidable weapon.

For the role of J. Paul Getty’s ex-CIA fixer Fletcher Chase, Scott chose Mark Wahlberg for All the Money in the World – which, frankly, is one of the film’s few missteps. Wahlberg plays Chase with all the charisma of one of his late-aughts action vehicles (think Shooter in an ill-fitting 70s suit), acting mostly as bodyguard and enforcer for the film’s more proactive Gail. It’s not a terrible performance by any means, but it’s disappointingly ordinary.

Compare that to Brendan Fraser’s bold, revelatory return to screens as Trust’s version of Chase: a bolo tie draped over pot belly and a wide-brimmed Stetson framing his weathered face, Fraser’s Chase is a confident, brassy cowboy archetype, swaggering through every scene as if he never left our screens.

While he’s not the rippling, muscular lead he was in the 90s, Fraser’s transition to oddball character actor is complete and assured from frame one – episode two, “Lone Star,” has him front and center, effortlessly guiding the audience through not just Rome, but a history of American disillusionment leading up to now. “1973, the year of our lord – the milk went sour,” he drawls, sucking from a milk bottle in the kind of ballsy, on-the-nose image Trust indulges in from time to time. No one but Brendan Fraser, in this specific time and place in his career, could make that work.

No telling of the Getty kidnapping would be complete without the kidnap victim himself – “The Golden Hippy” John Paul Getty III, an aimless, jobless trust fund kid living the sex, drugs, and rock ‘n roll lifestyle in 1970s Rome. Both Scott and Boyle get the look right – All the Money’s Charlie Plummer (no relation to Christopher) and Trust’s Harris Dickinson are the spitting image of the real figure, gangly legs covered in big bell bottoms and a thick mane of curly hair covering their elven faces.

Their roles in their respective adaptations, however, have some stark differences. Plummer is mostly a MacGuffin, a passive boy with little agency who lives and dies by the whims of his kidnappers. In fact, All the Money had to invent a character from whole cloth, the sympathetic Roman abductor Cinquanta (Romain Duris), to maintain the momentum of this side of the story.

Judging from the first few episodes of Trust, Dickinson’s Getty gets more of an interior life than Plummer’s plot device. Between his debauched life of drugs, dancing and sex in Rome, the show draws clear parallels between him and his grandfather – both are men with certain appetites, and the inability to hear the world when it tells them ‘no.’ Dickinson’s plays Getty with a fragile bluster Charlie Plummer’s version lacks by necessity.

For all their differences in format, Trust and All the Money in the World are just as much a reflection of their respective filmmakers’ distinctive styles and concerns. Take Ridley Scott, with All the Money in the World: the man is a master of moody, dark morality plays, whether they’re set in the dim corridors of the Nostromo in Alien or the fog-shrouded streets of Japan in Black Rain. Scott’s approach to the Getty story is American Gangster meets The Counselor, straightforward thriller trappings interspersed with hints of absurdist weirdness. All the Money doesn’t reach the crazy extremes of Trust, but it gives viewers a peek at the ludicrousness of the entire affair, while keeping it contained in a tight thriller structure.

Boyle, meanwhile, is a master of the music-video edit and the boisterous needle-drop – from Trainspotting to Trance to 127 Hours, there’s a fast-paced slickness to his filmmaking that spices up even austere settings like Getty’s Sutton House. The visual style of Trust is brassy and idiosyncratic, using everything from 24-style split screens to extreme Dutch angles, direct camera addresses, and more to convey the sheer absurdity of the story being told. Characters have physical tantrums set to frenetic jazz drum fills; a raucous pool party is heralded by a long tracking shot through the estate set to Pink Floyd’s “Money”.

Art exists in context, as they say, and the proximity of Trust and All the Money in the World’s release is enough to wonder what drove this story to the forefront now. Certainly, the country’s choice of president has played a significant factor: Getty, like Trump, is an ostentatious oligarch with more than a few eccentricities – not the least of which is a desire to accumulate wealth at virtually any cost. The building comparisons between the Nixon and Trump eras, both times of extreme disillusionment with American government and identity, certainly provide another hint.

In All the Money, the perils of unchecked greed are front and center in Scott’s thematic concerns, the story centered firmly in Gail and J. Paul’s consistent negotiation about whether he should let go of some of his precious fortune to save his grandchild’s life. Whereas Scott is subtler with his social critique, Boyle will just jab his finger in the audience’s sternum and tell them (through his characters) exactly what’s wrong with the American sensibility. Whether it’s Fraser’s milk-based monologues, or any of Getty’s bourgeois quirks (his butler dresses him, and even brushes his teeth for him), Boyle is never shy about showing the inherent vulgarity of massive, wasted wealth, or the policies and mindsets that allow the idle rich to accumulate it.

Whether you prefer Ridley Scott’s tightly-structured thriller, or the free-wheeling chaos of Danny Boyle’s miniseries, both contemporary versions of the John Paul Getty story – Trust and All the Money in the World – present compelling portraits of one of America’s most flawed, fascinating families. We live in a time where the mega-rich seem untouchable, bolstered by a plutocracy that allows them to buy all the power and prestige they want.

When J. Paul Getty answers his grandson’s ransom demand with a resolute, “no,” it feels like a microcosm for the entitlement of the 1%. Exploring this story not once, but twice, might give audiences a greater understanding of what drives these powerful men at a time when they have more influence over our daily lives than ever before.