Even Dr. Evil has been fired from Trump’s White House 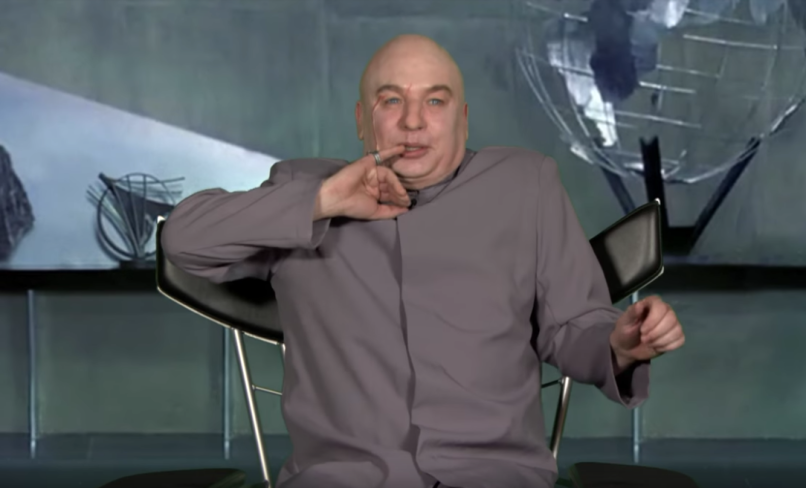 Mike Meyers as Dr. Evil on The Tonight Show

The Trump White House has been a revolving door of hirings and firings to the point where it’s actually setting records. Last night, the latest staffer to get the axe appeared on The Tonight Show Starring Jimmy Fallon to dish on his experience in the administration. Yes, it turns out Dr. Evil had been helping guide policy since before the election, and boy does he have stories to tell.

Mike Myers was Fallon’s guest Wednesday night, and he donned the bald cap and pinkie ring of his classic Austin Powers villain for the exclusive interview. Apparently, Dr. Evil was meant to be Secretary of Evil, “but Steven Bannon got that job.” Evil stuck around as “an ideas guy,” taking credit for things like the Space Force and the wall. “But I wanted it to be a moat filled with spiky blowfish,” the bad doctor said. “But I didn’t want the Mexicans to pay for it; I wanted Alec Baldwin to pay for it.”

If you think such a dishonorable act as deporting DREAMers must have come from a man named Evil, you’d be wrong. “No, Jimmy, even I have my limits,” Dr. Evil told the host when asked about the policy. “I’m evil, but I’m not a monster.”

He went on to discuss his relationships in the White House. Apparently, he and Ben Carson were good buds due to the fact that “we were both evil doctors that didn’t know why were there.” He also took a shot at Don, Jr. (“He looks like he’s missing a facial feature, you just don’t know which one”) and promoted his tell-all book, Fire and Fury and Also Evil And More Fire and Also Magma Too. Finally, Dr. Evil revealed he’s running for President in 2020 with the slogan “Make the World Evil Again,” and a running mate who’s “the only man who’s more hated right now than Donald Trump.”

To find out who, watch the clip below. Myers is set to appear in two upcoming films: the neo-noir thriller The Terminal starring Margot Robbie, and the Freddie Mercury biopic Bohemian Rhapsody. There’s also been talk of a fourth Austin Powers movie, but so far nothing has been announced.