Film Review: As Kodachrome Develops, It Reveals a Picture You’ve Seen Before 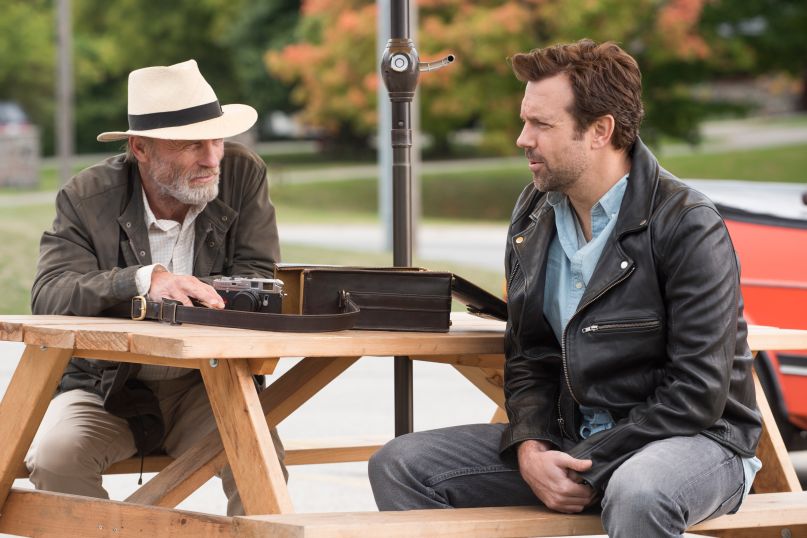 Film buffs know when they’re looking at a Kodachrome picture. Others might just feel a pang of nostalgia. Digital photos provide depth, sharpness, and detail, but the soft colors and high contrast of a Kodachrome picture exude a curious warmth; in retrospect, they look like memories, and that’s comforting. Mark Raso‘s Kodachrome, released on Netflix, is comforting as well, because you’ve seen it before in some fashion. You know the characters, the beats, and the general arc. You know how it will end before the first act concludes, and that’s fine. The journey’s pleasant enough.

That journey leads us to Parsons, Kansas, where in 2010, the final roll of Kodachrome film was processed before being discontinued. Raso’s film weaves a fictional story around that event, with A&R guy Matt Ryder (Jason Sudeikis) driving his ailing, cancer-stricken father Ben (Ed Harris) and Ben’s nurse Zoe (Elizabeth Olsen) from New York to Kansas to process some old rolls before the process is abandoned forever. Ben, a famous photographer, wants to build one final show around the photos on these rolls, which were taken years ago, when Matt was just a child. Matt, however, resents his father, who was lecherous and distant, not to mention cruel to Matt’s mother, who died when he was just 13. He initially refuses the trip, but is soon convinced when Ben’s manager Larry (Dennis Haysbert) promises to set up a meeting that could help save Matt’s job at his record label.

Ben remains an asshole, but there’s a penitence at his core. Matt is resistant, but eventually worn down. Matt and Zoe flirt, inching towards courtship. Jonathan Tropper’s by-the-numbers screenplay would be infuriating if it weren’t so airtight. Kodachrome‘s biggest asset, besides its cast, is how well it’s paced. Like any good road movie, Kodachrome has a purring engine and a pervasive sense of momentum. Also, Tropper’s dialogue is routinely appealing and occasionally cutting — “It’s like he’s getting away with it or something,” Matt says of Ben’s past behavior and their forced reunion, a line that perfectly articulates the depth and weight of Matt’s anger. There’s some quirk here as well: A recurring bit about the band Live should amuse anyone who grew up listening to alt-rock radio in the ’90s.

Harris is reliably charming, lining his barbs with dry humor and emotional heft. The problem is that Ben never quite feels real, with his ornery demeanor and blunt declarations eventually resonating like a confluence of too many bad-dad archetypes. Harris offers up some genuine moments of tenderness as the film veers into its third act, but as a character, Ben remains blurry. Olsen fares better in an underwritten and occasionally confounding role, her casual charisma pairing well with that of her co-stars. She and Sudeikis have some nice chemistry, though the drama that eventually surfaces between the two is too manufactured to really challenge them.

With Harris, however, Sudeikis taps into some genuine pathos. The SNL alum’s built an impressive film career for himself, despite the fact that he’s often tasked with playing the straight man or indulging in broad comedy. Here, however, he’s not only given a screen partner like Harris, but also a character who’s wrestling with matters of abandonment and loss, and he succeeds in exploring honest, restrained means of expressing grief.

One wishes, however, that Kodachrome would’ve delved a bit deeper into its namesake. The reality that there was a sense of mourning among many when the film was discontinued is a fascinating one, and one we only get a brief glimpse into in the film’s final act. The question of why Ben remains so devoted to Kodachrome is never quite explored, nor does the film itself really take pains to explore why it’s so cherished. As such, it serves only as a fairly heavy-handed metaphor, rather than a distinguishing factor in an otherwise familiar story. There’s plenty to like in Kodachrome, but were it hanging in a gallery, you’d most surely walk on by. Not all pictures are worth a thousand words.