Film Review: I Feel Pretty Takes on Identity Crises While Having One of Its Own 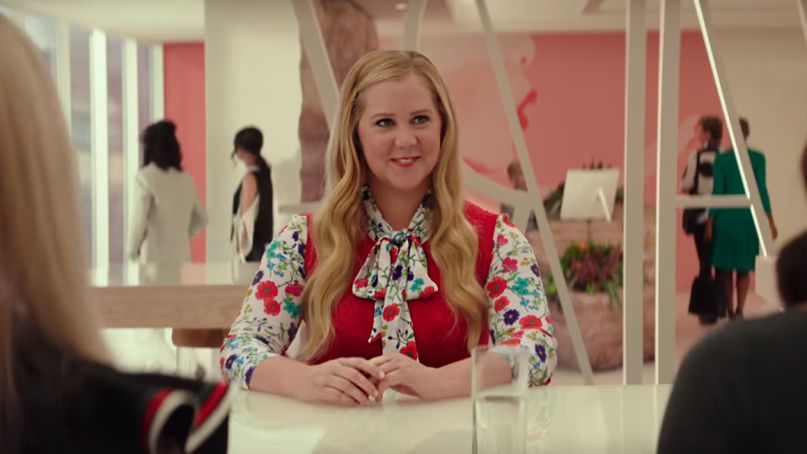 Between her hit sketch show Inside Amy Schumer and her breakout R-rated rom-com Trainwreck, Amy Schumer has established herself as a confident, outspoken, raunchy comedic force. But the PG-13 vehicle I Feel Pretty gives Schumer the chance to try out something different: a gentler comedy about an insecure woman given the gift of self-confidence. Though it’s as much a story about self-love as romantic love, I Feel Pretty feels like a throwback to the glossy rom-coms of the early 2000s. It’s easy, breezy, and centered around a core of welcome sweetness. Unfortunately, it’s also far less thoughtful about its body positivity message than it thinks it is.

Schumer plays Renee Bennett, an “ordinary” woman with a solid, if unglamorous, job running the website of high-end cosmetics company Lily LeClair. Though Renee has a supportive group of friends (Aidy Bryant and Busy Philipps), she’s lacking in both romantic prospects and self-esteem. But that changes when she whacks her head during a SoulCycle class and wakes up convinced she’s the most beautiful woman in the world. No longer held back by self-esteem issues, Renee finally starts achieving the personal and professional goals she’s being keeping on the back burner. But like the Tune Squad from Space Jam, Renee’s “magic” was actually inside her all along. Her appearance hasn’t actually changed; it’s her newfound confidence that’s opened so many doors.

With a lengthy list of rom-com screenplays to their name, including Never Been Kissed, He’s Just Not That Into You, and How To Be Single, writing partners Abby Kohn and Marc Silverstein make their directorial debut with I Feel Pretty (they also co-write). Their smartest choice is to resist the impulse to show the audience what Renee sees when she looks into the mirror and declares herself beautiful. There are no cutaways to a statuesque model in Schumer’s place, which both heightens the comedy of the concept and prevents the movie from having to define exactly what “beautiful” looks like. (Renee does mention that she’s now as stunning as a Kardashian-Jenner, so there’s still a pretty specific frame of reference.) Though Kohn and Silverstein occasionally let their actors’ improvisational riffs go on too long, there are consistent enough laughs throughout to keep the movie clipping along through the beats of its feel-good story. And the directing duo have a particular knack for capturing Schumer’s body in funny but non-exploitative ways, particularly during a bikini contest scene that seems to be setting up a bit of cringe comedy, only to swerve and offer something sweeter and more unexpected instead.

But despite its good intentions, I Feel Pretty is also very much at odds with itself. On the one hand, the film argues that Renee is limited solely by her lack of self-confidence. On the other, it objectively proves that Renee’s insecurities aren’t just in her head by including scene after scene in which Renee is mistreated, sneered at, and judged (to her face!) by pretty much everyone around her—from strangers at the drugstore to Sasheer Zamata’s SoulCycle receptionist to Naomi Campbell’s CFO. It’s all meant to be #relatable for women who have felt judged for their own appearances, but it comes across as off-putting and unrealistic. And in explicitly establishing Schumer as this world’s low standard for beauty (not just to herself, but to others), I Feel Pretty risks alienating rather than empowering its audience. It’s true that women of all shapes and sizes can have complicated relationships to self-worth, and Schumer’s certainly no stranger to comments insulting her appearance. But presenting the film’s “Just love yourself!” message via a woman who’s several sizes smaller than the average American woman, and conventionally attractive by most measures, also feels like a disappointing half-measure. I Feel Pretty thinks it’s radically expanding the idea of who gets to be considered a leading lady, but it’s not doing anything Bridget Jones’s Diary didn’t do 17 years ago, with a far less self-congratulatory pat on the back.

But what keeps I Feel Pretty from being, well, a trainwreck is that the movie is only half interested in being a wacky body-switching comedy about societal beauty standards. When the film eschews that broader messaging to focus on Renee’s more grounded personal journey, it becomes something far more charming. In its best moments, I Feel Pretty feels like an enjoyably sunny riff on The Devil Wears Prada. Like Anne Hathaway in that 2006 film, Renee is thrust into a glamorous world full of intimidating women. Only unlike Hathaway’s Andy, Renee is absolutely thrilled to earn a receptionist job at Lily LeClair’s Fifth Avenue offices.

Schumer is never better than when she’s conveying Renee’s utter glee over the strange, almost alien world of LeClair (at one point she has to cross an indoor lily pad pond to deliver a pitcher of water to a meeting). And in a genre full of bumbling protagonists and cruel bosses, it’s refreshing to see Renee immediately excel in her position and be treated well by both company founder Lily LeClair (Lauren Hutton) and Lily’s model-turned-CEO granddaughter Avery LeClair (Michelle Williams) — both of whom see value in Renee’s everywoman perspective, given that they’re in the middle of launching a new drugstore makeup line. In her first full-on comedic role, four-time Oscar nominee Williams all but steals the movie, playing Avery as a sort of demented Disney princess who’s accidentally wandered into a corporate environment. That her character barely has a coherent arc matters less because Williams is so funny, which feels like a distillation of the entire I Feel Pretty ethos.

Kohn and Silverstein also put their rom-com chops to good use in Renee’s burgeoning relationship with Ethan (a hugely endearing Rory Scovel), a sensitive, soft-spoken guy who gets swept along in the whirlwind of her newfound confidence. The charming, realistic banter between Schumer and Scovel shows off I Feel Pretty at its low-key best. Unfortunately, the film keeps returning to less interesting subplots, including Renee’s friendship with her stunning SoulCycle classmate Mallory (Emily Ratajkowski), her flirtatious relationship with Avery’s handsome brother Grant (Game Of Thrones’ Tom Hopper), and some surface-level beats about female friendship, all of which feel like the movie just ticking off boxes.

With a soundtrack full of female empowerment anthems like Alicia Keys’ “Girl On Fire,” Meghan Trainor’s “Me Too,” and Lizzo’s “Good As Hell,” I Feel Pretty is clearly designed to provide maximum emotional uplift with minimal thought demanded from its audience. But despite its surface-level charms, I Feel Pretty ultimately winds up feeling like a cosmetics company co-opting the language of self-love to sell its products: Empowering, but also a little hollow.