Film Review: The Rider Offers an Unforgettable Blend of Reality and Fiction 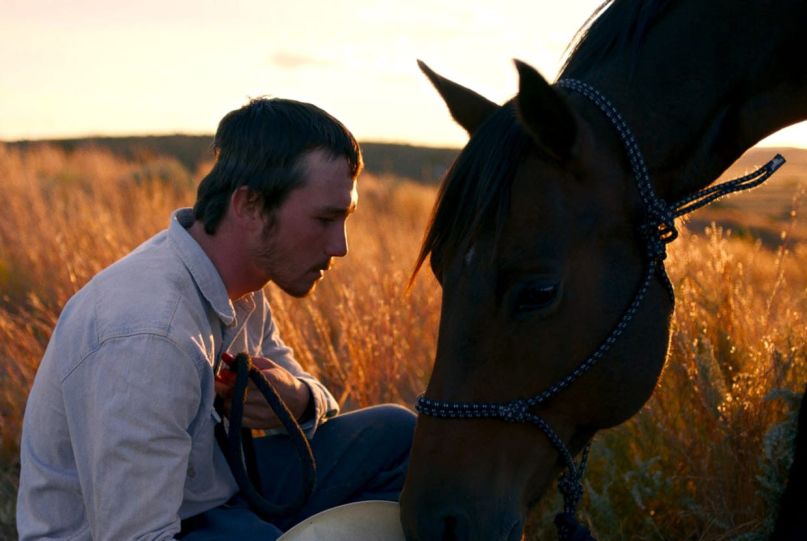 In Abbas Kiarostami’s arresting 1990 drama Close-Up, the director created a half-documentary, half-dramatized account of Hossein Sabzian’s attempted impersonation of Iranian director Mohsen Makhmalbaf, combining real footage of Sabzian’s trial with reenactments of true-life events starring the people who were really involved. It’s a transcendent blending of fiction and fact, a compelling drama in constant negotiation with the various layers of artifice at play in telling its true story. The Rider, Chloe Zhao’s heart-stopping new drama, plays with authenticity in a similar way, leading to one of the most beautiful, poetic films of the year.

Brady Jandreau, a young horse trainer and rodeo rider living on the Pine Ridge Oglala Lakota Reservation, suffered a horrific head injury in 2016 when he was bucked from his horse. Now he has a metal plate in his head, and suffers seizures in his right hand – the one he uses to hold the rope that keeps him on his steed. Deeper than those physical wounds, however, are his emotional ones: riding horses and competing in rodeos is all he has, the thing he loves more than anything in the world. The Rider dramatizes this journey, mildly fictionalizing it (his surname is changed to Blackburn) and elevating it to a soulful exploration of the ways in which life challenges our sense of purpose.

What’s most miraculous about The Rider is the jaw-dropping believability of its cast of non-professional actors, most of them members of the Jandreau family and their friends and neighbors. Jandreau is an absolute movie star, his soulful eyes and reserved intensity drawing the audience into his heartbreaking emotional journey. He displays none of the awkwardness that plagues the non-actors of other docufictions like Clint Eastwood’s The 15:17 to Paris; he’s equally at ease onscreen as on the back of a horse. In a just world, Jandreau’s performance here would launch him to stardom.

The Rider is Jandreau’s story to tell, and he relives every moment of this terrible time in his life with an unbelievable stoicism and psychological depth. He’s a young man raised in the tradition of the horse rider, growing up in a culture that prides itself on a sensitive cowboy masculinity,  pride in its connection to nature, and the brotherhood of man. Without that he’s nothing, and Jandreau instinctively conveys the anguish of that realization in ways that cut deeper than a put-on performance.

Perhaps it runs in the family, since the other Jandreaus (and those around him) do just as much to bring these scenes to life. His father and sister play those same roles in The Rider, and they manage to keep up with Jandreau’s inherent star power to inhabit beautifully rendered characters in their own right. Wayne (played by father Tim Jandreau) is a disillusioned drunk who doesn’t quite know how to support his son in these trying times; it’s to his credit that he doesn’t shy away from playing the bad guy from time to time, even onscreen.

There’s also Lilly, Brady’s sister, an engaging 15-year-old with an unidentified developmental condition who serves as a reminder of why Brady needs to value his health and safety over the near-religious pull of horse riding. An able-bodied actor, however well-intentioned, could have easily turned a role like this into caricature; as is, Lilly’s unpracticed authenticity paradoxically makes her the most lyrical presence in the film. (One of her most heartwarming affectations is to make up simple songs about whatever’s on her mind, cooing them with an angelic singing voice that’s one of The Rider’s most magical elements.)

Surrounding these unforgettable performances is one of the most gorgeous-looking films of the year. Zhao, who debuted with the lyrical Songs My Brother Taught Me, imbues the Dakota landscape with a bittersweet sense of cinematic grandeur. The vast majority of The Rider seems lit entirely by sunset and moonlight, taunting Brady (and the audience) with its natural wonders while accentuating the melancholy he feels. In those brief moments when we do see him ride along the plains, the wind at his back, it’s hard for the audience to not share that feeling of near-spiritual liberation.

The film’s not all picturesque landscapes, however; it’s a tale of loss, pain, and the risks that come with following your dreams. When Zhao’s camera isn’t scanning across the desert, or finding the perfect way to frame the distant moon between two faces, it’s lost in a deep study of Brady’s face, capturing every nuance of his underplayed performance. Whether he’s connecting with Lilly, or visiting a fellow rider who’s been completely debilitated by his own injury (played by real-life friend Lane Scott), Jandreau manages to deliver layers of emotional intensity and truth on par with the most seasoned thespians. Zhao knows that he’s the secret to The Rider’s unforgettable power, never shying away from the stoicism and pain that lies behind Brady’s baby blues.

Some of the most breathtaking scenes take place when character-Brady does what the real Brady does best – train horses. Zhao captures these unscripted sessions in elegant, long takes, pulling back to simply observe the man’s almost spiritual connection to these animals. More than a skilled performance, it’s an astounding study of the man’s real-life talent for training horses – speaking to them like he’s their brother, their friend, and their father in equal measure. It’s in these instances that the audience is reminded that Brady is not an actor – we’re not watching a highly-paid movie star humble himself to play a cowboy, going through the motions with a few weeks of horse training. This is a man who lives and breathes these beasts, someone whose identity is inexorably tied to the sense of brotherhood he feels with them. By focusing her lens on someone who’s a horse-rider first and an actor second, Zhao approaches a realism that feels positively revolutionary – a return to the frontier honesty of the Western in its heyday.

The Rider is nothing short of a masterpiece, an elegant work of cinematic poetry that elevates the everyday struggles of real people to the level of high art. James Joshua Richards’ incredible cinematography renders the Dakota plains with a Malickian level of natural beauty, the perfect backdrop for an innately compelling set of raw, barely-fictional performances from actual people with deep interior lives. Zhao manages to combine the authenticity of reality and the artifice of cinema to offer up something entirely new that should not be ignored.