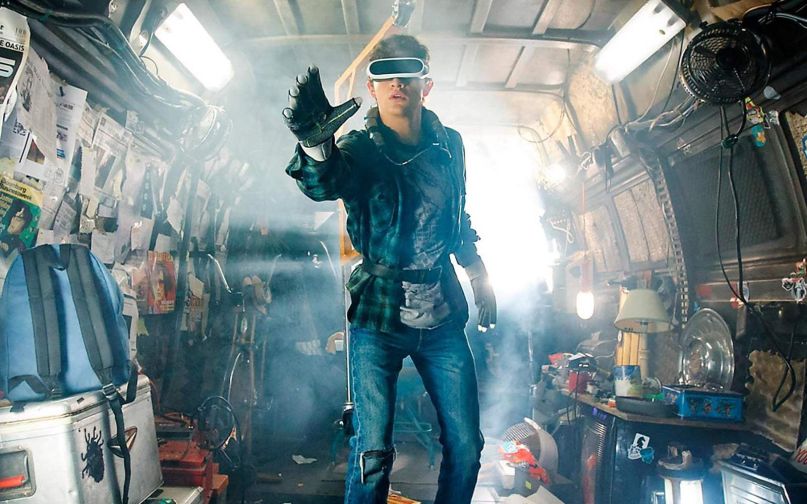 Wade Watts in Ready Player One

This past Friday, Steven Spielberg’s homage to Steven Spielberg, Ready Player One, hit theaters across the country. You may have seen a few trailers for this movie — not a film, mind you, a movie — featuring some of your favorite geek culture icons from the ‘80s and ‘90s: the Iron Giant, Doc Brown’s DeLorean, and a whole bunch of Star Wars shit. I’m a law student by day, and my first thought upon hearing that Ready Player One would become a film was, “How many millions of dollars will it cost to license all this intellectual property?” My second thought was, “Will this be hardcore nostalgia porn?”

That was the major criticism of the source work, Ernest Cline’s 2011 script treatment novel. Cline had written mostly for the screen before penning RPO, and it shows in the book’s choppy prose and breakneck pace — the story, despite its many flaws, is a page-turner, and was seemingly begging for a visual adaptation on a massive scale. But upon finishing the book, a reader is left with a profound sense of emptiness. This is because Cline spends literal pages listing his favorite video games, films, television shows, songs, ad campaigns, and other pop culture trivia from the Carter and Reagan years, and he’s created a world in which having this knowledge makes you a god.

Ready Player One is a male nerd’s masturbatory fantasy, and the novel’s supposed warning about the dangers of living in virtual reality seems more like a forced nod, a shout to mom through a closed bedroom door that, yes, you’ll turn in your college applications tomorrow; now, stop interrupting this Fortnite match. CoS’ Dan Caffrey writes that Ready Player One the movie does little better on this front. This isn’t to say that nostalgia porn doesn’t have its place in our cultural oeuvre, nor is it to categorically deride mindless, uncritical fun. But on the whole, it’s important to demand that Hollywood deliver projects of substance. And most of the time, films that exhibit nostalgic tendencies won’t be as obviously nostalgia pornographic as RPO. Notable successes of the past couple years like La La Land and Stranger Things, for example, sit in a hazy area.

It’s hard to think of many other movies that totally blow by this boundary. Season 1 of Stranger Things strayed close to it at times, but the series was saved by the sheer charisma of its cast, and Season 2 resolved a number of the narrative and character flaws that jeopardized ST in some critics’ eyes. But one cultural category deserves a blanket warning in this area: sequels, films in which the nostalgia is not for a particular time but for a particular work. Take away Austin Powers in Goldmember’s regular callbacks to jokes from the franchise’s earlier installments, for example, and you’d be left with a supremely boring attempt at a sex-and-poop comedy. A closer call is The Force Awakens, which clearly followed the narrative beats of the original Star Wars and leaned on self-reference to rally the audience — who wasn’t exhilarated to see the Millennium Falcon unveiled again? But the bittersweet perspective offered by an older Leia Organa and Han Solo, combined with the freshness and spunk of Rey and Finn as protagonists, rendered TFA a worthy addition to the Lucasverse in its own right. And it would’ve made for a solid story even if it were the first entry in the saga. A sequel that can’t narratively stand on its own legs is a sequel that zombifies a series, a sequel whose budget robbed an original idea of a green light — a net negative for the cinema world.

One of the best nostalgia films of all time is Toy Story 3, the capstone on Rotten Tomatoes’ highest-rated film trilogy. TS3’s brand of nostalgia is somewhat unique in that its source is both its temporal removal from its two forebears and its conscious aim at millennials who first met Woody and Buzz Lightyear as children. Unlike other sequels, its nostalgia is character-based, not reference-based. But although the movie’s plot is built around the age-old quest for eternal youth, it packs an emotional wallop because it never lets its viewers indulge that fantasy. Andy’s going off to college — nothing will change that, and the best we can do is to derive joy from passing our memories and our toys along to the next generation.

One could argue that the vast majority of nostalgia falls into this category, because the current composition of Hollywood’s writers and directors ensures that most nostalgia tales come from the perspective of a straight, white man. The quintessential example of shade of gray, however, is La La Land, Damien Chazelle’s beautifully shot daydream that saw itself become an unwitting villain in early 2017. La La Land has a fleshed-out plot independent of its nostalgia, and its nostalgic motive isn’t an unbridled, desperate desire to return to some bygone past; yes, Ryan Gosling’s Sebastian would happily take a DeLorean back to the early 1940s and then rip out the flux capacitor so as to trap himself there, but the film is critical of him for missing opportunities in his blind pursuit of jazz. But there is a real issue with La La Land, and that is its near-erasure of the rich, largely African-American history of jazz music. There’s no hint of irony in Sebastian’s poetic waxes about the power of his chosen musical genre — we’re pretty clearly getting those thoughts straight from Chazelle’s mind — and therefore the film’s nostalgia is both clearly stunted and clearly unintentionally so. Intent would render the film a critique of its own characters; instead, we end up with a work of privilege steeped in a romanticism that many modern filmgoers can’t (and likely shouldn’t) find blithely alluring.

Previous Story
Film Review: A Quiet Place is Scary and Resonant, Even If It Betrays Its Own Premise
Next Story
Film Review: Blockers Is a Filthy, Funny Teen Sex Comedy With an Adult Problem
Popular
More Stories
[fu-upload-form form_layout="media" title="Submit Your Photo"][input type="hidden" name="ugc" value="1"][/fu-upload-form]