The Simpsons respond to Apu controversy on latest episode: Watch 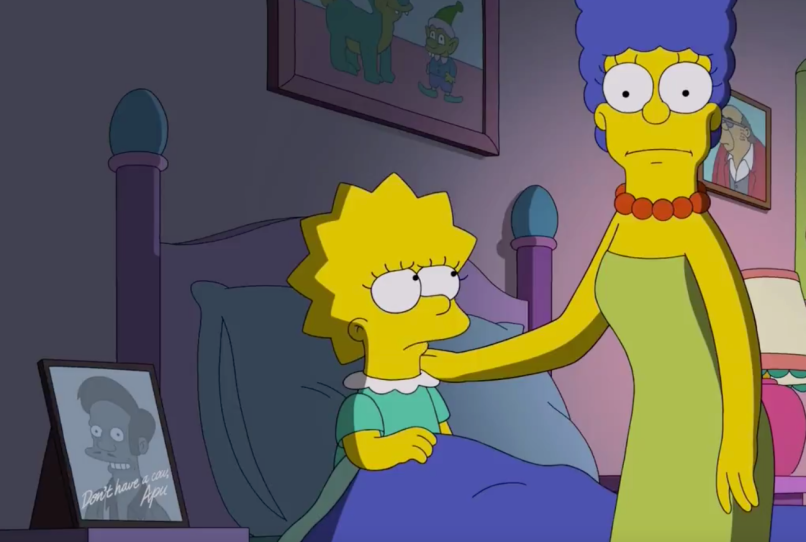 Last year, comedian Hari Kondabolu released The Problem With Apu, a short documentary exploring The Simpsons character Apu Nahasapeemapetilon. Specifically, the doc focused on how the character’s thick accent — provided by white voice actor Hank Azaria — and stereotypical qualities resonate in a culture that’s has grown since the show’s inception to recognize and call out racial caricatures. “Everything with Apu is like this running joke. And the running joke is that he’s Indian,” Kondabolu told The New York Times last year.

Last night, the long-running animated series addressed Kondabolu’s critiques directly. In the episode, titled “No Good Read Goes Unpunished”, Marge reads Lisa a book called The Princess in the Garden, which has been edited by the family matriarch to be as unobjectionable as possible. “It takes a lot of work to take the spirit and character out of a book, but now it’s as inoffensive as a Sunday in Cincinnati,” Marge says.

Later, as she and Lisa debate the book, Lisa addresses the TV audience directly, saying, “Something that started decades ago and was applauded and inoffensive is now politically incorrect. What can you do?” We’re then treated to a framed picture of Apu with the line, “Don’t have a cow!”, inscribed on it.

Marge responds, “Some things will be dealt with at a later date.”

Watch the scene below.

The Simpsons goes after politically correct critics, singling out "The Problem With Apu” https://t.co/4QRHsUJnd9 pic.twitter.com/HZRYPWoqaI

In addition to not being funny at all, the response completely misses the point of Kondabolu’s critique. “Since she’s already evolved she doesn’t really have an emotional journey to complete,” Lisa says of the princess in the story, which might be a valid point in terms of writing characters to have no flaws, but says nothing to the concerns of having a white actor voice a character that’s built on racial stereotypes. The writers seem to be taking a complex issue regarding race and representation and throwing it under the umbrella of “political correctness,” which has become the laziest of catch-alls.

Wow. “Politically Incorrect?” That’s the takeaway from my movie & the discussion it sparked? Man, I really loved this show. This is sad. https://t.co/lYFH5LguEJ

In “The Problem with Apu,” I used Apu & The Simpsons as an entry point into a larger conversation about the representation of marginalized groups & why this is important. The Simpsons response tonight is not a jab at me, but at what many of us consider progress.

Many critics of color also bristled at the writers having Lisa, the show’s voice of progressive thought, deliver the line:

No this is the ultimate slap in the face. Delivering it through Lisa is their way of saying: “this *is* the reasoned, progressive and culturally sensitive perspective.” https://t.co/2naBrnAJi3

I think the fact that they put this "argument" in the mouth of Lisa's character, the character who usually champions the underdogs and is supposed to be the most thoughtful and liberal, is what makes this the most ridiculous (as in worthy of ridicule) and toothless response.

Before we launched Waypoint, I often described the site as "the Lisa Simpson of gaming," because the goal was to be progressive, alternative, critical, and self-reflective. Oh well, so it goes. https://t.co/4Oc4FW1Azl

The cast and crew of The Simpsons seem rather split on the whole issue. Azaria told TMZ last year, “I think the documentary made some really interesting points and gave us a lot of things to think about and we really are thinking about it.” Meanwhile, Al Jean, one of the show’s original writers and its showrunner since 1998, retweeted messages calling the criticism of Apu a “non-issue.”

Whatever the case, Kondabolu sums it up thusly:

TO THE JOURNALISTS WHO HAVE ASKED ME FOR A PUBLIC STATEMENT ABOUT LAST NIGHT’S SIMPSONS EPISODE, I JUST WANT SAY: “Congratulations to the Simpsons for being talked about & being seen as relevant again.”