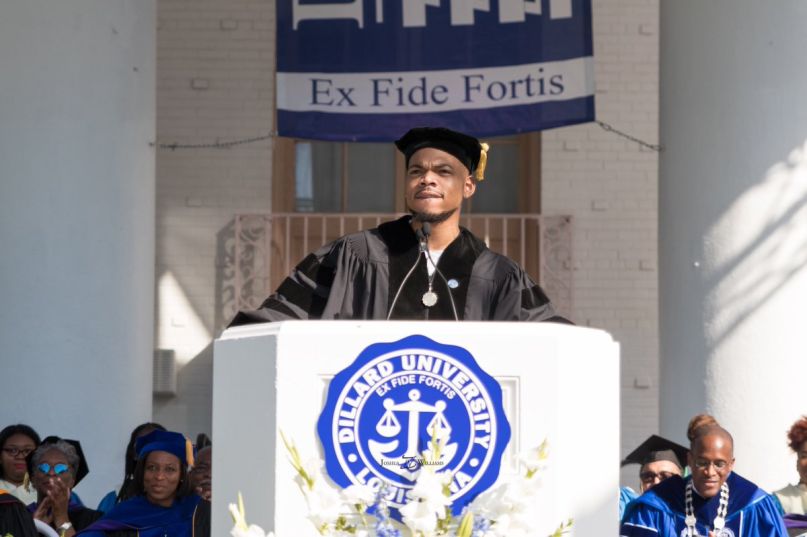 That’s Dr. Chano to you. Chance the Rapper gave the commencement address at New Orleans’ Dillard University this morning, where he was also given an honorary doctorate for his “philanthropy and continued service to the youth.”

“The difference between goodness and greatness is going beyond,” he told the school’s graduating class. “Living up to your heroes is amazing, but it’s not good enough.”

He went on to discuss the power of inspiration, name-checking Beyoncé, Michael Jackson, and more. “Beyoncé had Mike. Mike didn’t have Mike. Mike had James Brown. James Brown had Cab Calloway. And so on and so on. Right now, the greatest performer who ever lived might be in this audience. And that person has something Beyoncé never had. They got Beyoncé. And so they have—you have—the greatest performance of all time; to watch it, to study it, to learn from it, But not to replicate it. To surpass it.”

In a statement, Dillard President Dr. Walter M. Kimbrough, who teaches a class on ethics and hip-hop, said, “I thought he made for a great commencement speaker because of his spirit of being entrepreneurial and authentic. But his civic engagement, including encouraging people to vote and willingness to speak out on issues…are just as paramount.”

Chance lit up Instagram before the ceremony, announcing that today was his “graduation day.”

GOOD MORNIN 🎶 Headed to Dillard University right now to give my first ever commencement speech 😬 Even crazier, I’m receiving my honorary doctorates today 😭😭

See some shots of Chance and the ceremony below.

Congratulations @chancetherapper on receiving his honorary degree for his philanthropy and continued service to the youth. Thank you for being our 2018 Commencement speaker! #MyDU #DillardGrad18 pic.twitter.com/doUFYDSoRo