Film Review: RBG Examines the Complex, Inspiring Woman Behind All the Memes 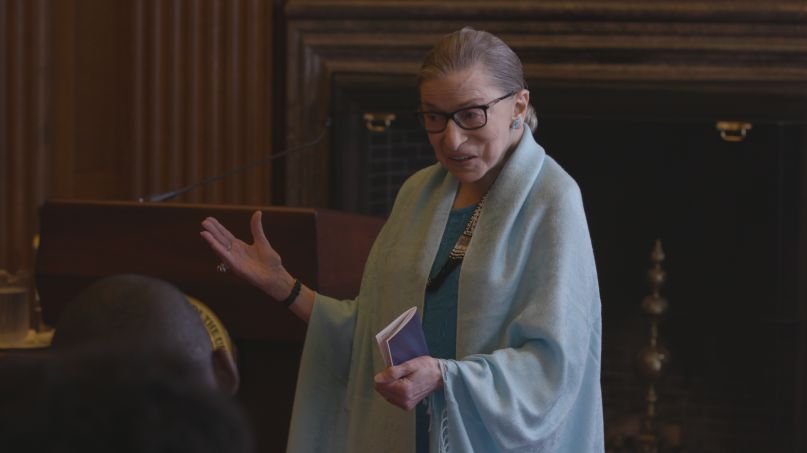 With her “Notorious RBG” nickname branded on coffee mugs, t-shirts, biographies, and even “dissent collar” necklaces, Supreme Court Justice Ruth Bader Ginsburg sometimes feels as much like a meme as a person. Especially in recent years, her strongly worded dissenting opinions have led her to become a sort of “yaaas Queen!” icon for a younger generation desperate for socially conscious heroes with a certain social media-friendly swagger.

Kate McKinnon’s hilarious SNL impression helped cement that legacy, but when filmmakers Julie Cohen and Betsy West show Ginsburg the sketch for their new documentary RBG, she agrees it’s “marvelously funny” but also nothing like her. The real Ginsburg is no less heroic, but certainly more complicated than her social media iconography suggests. And RBG digs into those complexities by charting Ginsburg’s impressive biography via high-profile talking head interviews (Bill Clinton, Gloria Steinem, and Ginsburg herself to name a few) and an impressive amount of archival footage and audio pulled from Ginsburg’s lengthy legal career.

That’s not to say the documentary is a dry one. RBG is a largely breezy watch, full of funny and fist-pumping moments, including footage of the 85-year-old Ginsburg doing her legendary workout (complete with planks and full push-ups) in a sweatshirt that reads “Super Diva!” But RBG also paints a more multifaceted portrait of the less meme-able philosophy at the center of Ginsburg’s life and work: To make radical change, it’s better to politely work within the system than to angrily overthrow it.

Ginsburg came of age in the 1940s and her mother (who died when Ginsburg was just 17) instilled two major lessons in her daughter: “Be a lady” and “be independent.” The first was a reminder not to give into “useless” emotions like anger, but to instead remain polite, calm, and dignified in the face of conflict. And the second was a desire that her daughter be able to fend for herself without being dependent on a man. Those dueling ideals shaped Ginsburg into a female trailblazer who’s decidedly not a feminist firebrand. Throughout RBG, Ginsburg’s friends and co-workers regularly describe her as reserved, shy, and deeply serious. As one of just nine women in a class of about 500 men at Harvard Law School in 1956, Ginsburg kept her head down, devoted herself to her work, and quickly rose to the top of her class, even as male professors chastised her and her female peers for stealing spots that could have gone to men. And Ginsburg did all this while taking care of a toddler and helping her cancer-stricken husband manage both his illness and his own law school coursework. More than sassy dissenting opinions, it’s quiet perseverance that shaped Ginsburg’s career.

The most interesting section of RBG details Ginsburg’s early life, education, and career — the elements least likely to be known by those familiar with Ginsburg mostly as a stateswoman of the Supreme Court. As radical second-wave feminists took to the streets in the 1970s, Ginsburg fought a more strategic legal battle in the courts, shepherding cases involving gender discrimination all the way to the Supreme Court. As the co-founder of the Women’s Rights Project at the ACLU, her goal was to slowly and incrementally prove the existence of sexism to a bench of Supreme Court judges with no personal experience in the matter. She did so by connecting specific cases about individual sexist policies to broader discussions of gender-based discrimination. And she cleverly focused on cases where men were the victims of gender-based discrimination (like a father unable to collect single-parent Social Security benefits, a.k.a. “mother’s benefits,” after his wife died in childbirth) so as to give the male Supreme Court Justices victims they could more personally relate to.

In one interview, Ginsburg wryly notes that during this era she often felt like a “kindergarten teacher” as she guided the Supreme Court judges through basic facts about the female experience. (In a particularly grueling audio snippet from a 1978 Supreme Court case, Judge William Rehnquist facetiously wonders aloud why women won’t just settle for having Susan B. Anthony on the new dollar.) And RBG makes the case that Ginsburg’s patient, pointed legal strategy in the 1970s helped fundamentally change life for American women.

The story of Ginsburg’s early career achievements is presented with straightforward simplicity in RBG. Elsewhere, however, the documentary struggles to tell as clear and concise a story, as it traces Ginsburg’s rise to the U.S. Court of Appeals and eventually the Supreme Court. In their attempt to condense Ginsburg’s lengthy career into a brisk, mostly lighthearted film, Cohen and West often err on the side of keeping things too surface-level. (The film clocks in at just under an hour and 40 minutes, and likely could’ve benefited from a longer runtime.) Cohen and West also struggle when it comes to naturally weaving in cutesier personal details about Ginsburg’s life, such her love of opera and her famed friendship with the hyper-conservative Antonin Scalia.

Still, there’s more to like than to dislike in RBG, which is neither as in-depth and critical as it arguably should’ve been, nor as shallow as it easily could’ve become given the pop culture adulation of Ginsburg. But the biggest surprise is the way the documentary doubles not just as a celebration of Ginsburg’s personal accomplishments, but as an incredibly moving tribute to her 56-year-long marriage to Martin “Marty” Ginsburg. Cohen and West’s most astute observations emerge from their exploration of Ruth and Marty’s unusually progressive partnership. As naturally gifted and hardworking as Ginsburg was, given the era in which she was born it’s unlikely she would’ve made it to the highest court in the U.S. without a preternaturally supportive partner willing to step outside of his own societal box. In detailing the ways the gregarious Marty put his wife’s career before his own and happily took on the domestic duties that so often fall to women (even today), RBG becomes a much-needed portrait of true male allyship in action.

It was the injustices of the 1950s “Red Scare” that first motivated Ginsburg to begin her career in law, and RBG links that tumultuous period with our current uneasy political climate. There’s certainly an argument to be made that Ginsburg’s patient “one step at a time” philosophy is no longer the ideal approach, especially in an era where the power of female anger is being reclaimed. But RBG convincingly argues that Ginsburg herself is a figure worth admiring, whether or not you agree with her politics and whether or not you like those memes.