Film Review: Terminal Never Adds Up To More Than the Sum of Its Influences 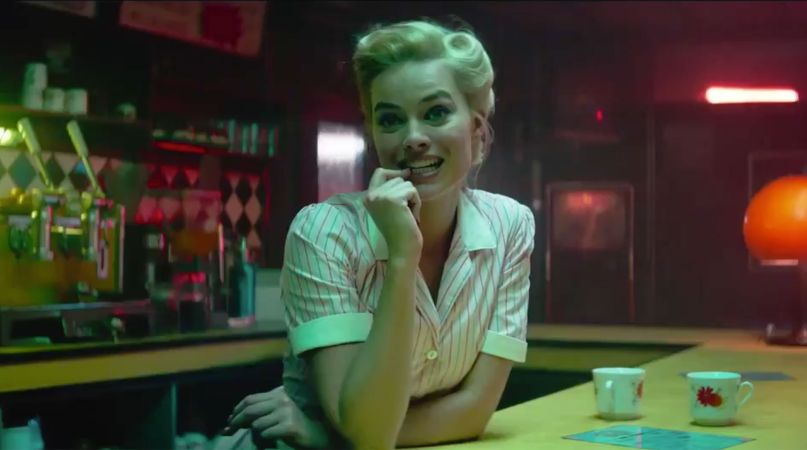 “An over-elaborate scheme perpetrated mercilessly upon you by highly motivated, highly intelligent individuals with a penchant for amateur dramatics.”

This florid phrase, uttered both by Dexter Fletcher and Margot Robbie in writer/director Vaughn Stein’s Terminal, sums up the film’s attitudes quite nicely. It’s bleak, overwrought, and far too clever for its own good. Drawing from a host of late-nineties influences but doing nothing with them, Terminal is little more than a shallow exercise in dated crime movie pastiche.

A hyper-stylized blend of every aesthetic and formal tic gleaned from hours and hours of Tarantino, Guy Ritchie and Nicolas Winding Refn films, Terminal does its damnedest to take the audience on a hypnotic rollercoaster ride through a seedy, neon-drenched world of crime and disreputation. Unfortunately, Stein appears so singularly focused on the film’s slick visual look that he forgets to make his audience care about (or even understand) the characters.

At the center of Terminal is Bonnie (Robbie), a hitwoman who, in the film’s opening minutes, promises an offscreen client that she’ll prove her worth to them. All she has to do is take out the competition – namely, two hitmen (Fletcher and Max Irons) staking out a hotel room awaiting orders to take out their own target. Meanwhile, in a seemingly unrelated part of town, a dying English teacher (Simon Pegg) meets an effervescent diner waitress named Annie (also Robbie), who talks him through the existential crisis he faces. All the while, a mysterious janitor (Mike Myers, laying on a thick Austin Powers voice under some dodgy prosthetics) creeps through the train terminal and its adjacent locations like a gap-toothed Greek chorus.

If that sounds puzzling, that’s because it is. For all its bold pops of color and kinetic camerawork, Terminal feels less like its own confident story than a perplexing rehash of the neo-noir trappings of its influences. Characters speak in baroque wise-guy dialogue (“I have an unquenchable bloodlust for darkness and depravity”), Stein’s script more concerned with giving his cookie-cutter archetypes unique quips than telling the audience who they are or why they should care. From the non-chronological storytelling of Pulp Fiction to the overbearing wisecracks of Ritchie’s films, Terminal is a limp throwback to its predecessors, relying on a vaguely-defined cool factor to carry the audience through its entwined, largely disparate plots.

Stein’s unrelenting visual panache certainly makes an impression: the entire city is blasted with contrasting washes of neon color, captured by Stein’s Steadicam-friendly swoops and extreme close-ups. The dark city of Terminal certainly seems like a nightmarish criminal underworld, a fanciful updating of classic crime story conventions: the grimy motel, the seedy strip club, and so on. There are moments of play in Stein’s visual world, indicators that he’s not taking this too seriously; unfortunately, he coats his sets in neon light to such an extent that the film becomes downright exhausting to watch. Imagine John Wick if the entire city was lit like the Red Circle Club.

Even more frustrating is the complete waste Terminal makes of its actors, particularly Robbie. As Bonnie/Annie, Robbie dives hard into her devilish femmes fatale, using all her considerable charisma to try and lift her character(s) from the dregs of film noir familiarity. Unfortunately, her efforts amount to little more than a half-hearted Harley Quinn impression. Pegg and Fletcher, meanwhile, are stuck going through the motions of skin-deep characters who exist solely to fulfill Stein’s muddled metaphors about morality. Their plotlines never meet, their characters never fleshed out; they’re just part of the scenery Robbie gleefully chews in a desperate effort to infuse life into this film.

By the closing minutes, all of Terminal’s “pervert poetry” (as Fletcher calls it) coalesces in a series of contrived twists that are almost outrageous enough to cover for the fact that the film’s first two acts are spent trapping the viewer in a state of constant boredom and confusion. As the purpose of Myers’ character becomes clearer, and Robbie’s interactions with Pegg and Fletcher draw to their inevitable ends, Terminal’s climax arrives as too little, far too late. Sure, there are some gonzo reveals and a deliciously silly ending, but by that point Terminal has wasted so much of its audience’s time with interminably corny dialogue and empty exercises in style that it fails to win back any goodwill.

Simply put, Terminal is a waste of time – for its overqualified cast, for the hardworking craftsmen who made all those neon light bulbs, and most of all for its poor, captive audience. It’s messy, dated, and more than a little exhausting to watch. Between the overbearing color schemes and the brain-dead dialogue, one would be forgiven for wanting to throw on Snatch or Drive afterwards just to cleanse the palate.