Film Review: The Tale Is the Kind of Film That Will Stay with You for Years to Come 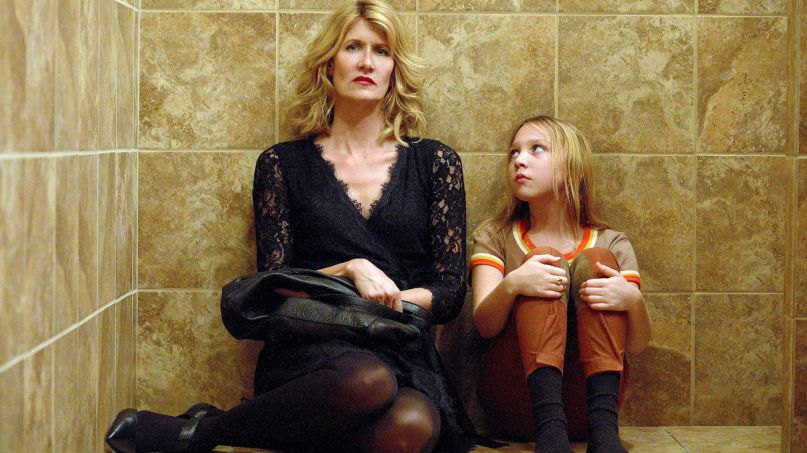 I’ve never ridden a horse — at least, I don’t think I have. Growing up, we never had money, so when would I have had the chance to ride a horse? I’ve been in a saddle, but I think that was a pony, a docile animal walking slowly in a circle. There are no photos of me on a pony; I just think it happened. Maybe it was a horse. Jennifer Fox, however, has been on a horse. I know this to be true, because I’ve seen photos — her on horseback, boots and helmet and riding crop, ‘1973’ penciled into the bottom right corner. I’ve seen that photo, and others, because they appear in The Tale, a film by Jennifer Fox. As of May 26th, you can watch The Tale on HBO. It is extraordinary, and I’m not sure I can ever watch it again.

Fox is a documentarian; The Tale is her first narrative feature. It’s about a documentarian named Jennifer Fox, played by Laura Dern. Jennifer Fox used to ride horses, but she doesn’t anymore, and she’s unsettled. Her old riding teacher, Mrs. G (Frances Conroy), tells her that’s foolish, that she’ll be fine: “The body remembers everything, it really does.”

The film begins with Dern’s voice, as Fox’s voice, saying “The story you’re about to see is true.” There’s a brief pause, a gentle pause, and she adds, “As far as I know.”

Gentle is a good word for The Tale. It’s also unsparing and deeply upsetting, based on ‘The Tale,’ a story by Jenny Fox, age 13. Jenny Fox, age 13 (Isabelle Nélisse), is a gentle person but lonely, hungry for affection, acutely sensitive to her own feelings and the feelings of those around her. She writes a story about two people who give her that attention, the young Mrs. G (Elizabeth Debicki) and her running coach, Bill (Jason Ritter, then John Heard). In the story she writes, the one she tells herself, they are two beautiful people who bring her into their love. Jennifer’s mother (Ellen Burstyn) finds the story, and a different story begins.

The Tale is about Jenny Fox’s story. It’s also the story of Jennifer Fox, 48, realizing the tale she told herself might not be the truth, and finding herself, almost unwillingly and even unconsciously, working to find out what the truth might actually be. If this film were pure fiction, it would still be a piercing work of art. But The Tale makes it impossible to forget that what we’re watching is rooted in both artifice and reality. On screen, Laura Dern’s Jennifer Fox examines her past, questions her memories, and interrogates herself in more ways that one. Behind the lens, Jennifer Fox the filmmaker does exactly the same, and Laura Dern is there to help.

It’s no secret that Laura Dern is a remarkable performer. What’s then surprising about her thoughtful, compassionate work in The Tale is how simple it is. Dern’s performance mirrors Fox’s approach as writer and director — she isn’t trying to shock or traumatize the viewer, but the blows aren’t softened, either. Her film is frank, quiet, unshowy, and wholly shattering. To say too much about her best scene is to tell you where Jennifer’s questions lead her, but there’s not a moment in the film in which she’s not grappling with two, three, or five of those questions at once. Yet Dern’s approach is to hold back, to play a woman who’s playing someone who’s keeping it together in the face of an unfathomable disruption of her personal history and sense of self. We rarely watch her emote; instead, we watch her try her best to make sure that she doesn’t.

Restraint and simplicity are words that can be applied to every performance in The Tale, and nearly all of those performances are excellent. The quartet of performers that bring Bill and Mrs. G to life don’t ever consciously play them as villains. Some of that is due to the writing — Fox shows us Jennifer’s memories as she remembers them; they only change when her recollection shifts or is challenged, and as Jenny didn’t think of them as her abusers, they’re not played as malevolent. But when the time comes for these horrific acts to occur, Ritter and Debicki take an approach that’s far more upsetting than if they’d taken off their masks to show us the monsters lurking beneath. Instead, they’re charming, affectionate, warm. They are monsters too good at being monstrous to ever remove their masks. They may even have convinced themselves that they’re not monsters at all.

But while the cast is uniformly good — Burstyn in particular excels, and her scenes with Dern are among the film’s best — there’s no denying that The Tale belongs to Dern and Nélisse. A title card in the end credits notes that an adult body double was used for all of the sexual content involving a child. It’s a statement that provokes nothing but gratitude and relief, and Nélisse’s performance is (here’s that word again) upsetting enough on its own. Why bother with synonyms? It’s deeply, and rightly, upsetting. Jenny is both the subject of this story and the dictator of a portion of its narrative, and while Fox’s smart and unflinching direction is responsible for much of the upset the film provokes, it’s Nélisse’s watchful, emotive face that communicates a great deal of its pain. Her fear, confusion, and shame cut like a knife, but her moments of comfort, trust, and pride are stomach-turning.

Nélisse is a talent to watch — perhaps a nice adventure story with a jolly talking dog in it or something next time — but Fox’s cinematic memoir works as well as it does precisely because she has an uncanny knack for when, and how, to linger on that face. That’s true of all the faces onscreen — sometimes that camera is too intimate, while at others it keeps a respectful, even cold, distance — but it’s true of Jenny’s face in particular. When Jennifer, unseen behind an imagined lens, questions her younger self in patient but pressing tones, Jenny’s stare is guileless but determined, collected, her belief in the story she’s told unshakable. When that resolve finally slips, bursting open the door into the film’s final act, it’s the kind of moment that’s not easily forgotten.

None of The Tale is, really. Between them, the film’s core trio — Nélisse’s Jenny, Dern’s Jennifer, and Fox herself — have created a depiction of sexual abuse that’s going to resonate with audiences for a long, long time. But the most shocking, upsetting thing Fox has done is tell a story about the malleability of our memories. They can be shaped by others, but also by ourselves; we can change them to survive the unthinkable, or to banish guilt and dodge accountability. I don’t know what my memory of The Tale will be years from now. I hope I remember the expressive, probing score (by Ariel Marx), the thoughtful costuming by Tricia Gray, the wryness of Burstyn’s performance, and the sound editing that tugged me gently to and fro in time. I hope I remember it all, but I’m almost sure that those frank faces will stay burned into my mind, just as they are now.

If my memory reshapes them, I’m not sure I’ll realize it. I have seen The Tale once. I do not regret it, but once is enough.