Alex Turner and the gang triumphantly return to the stage 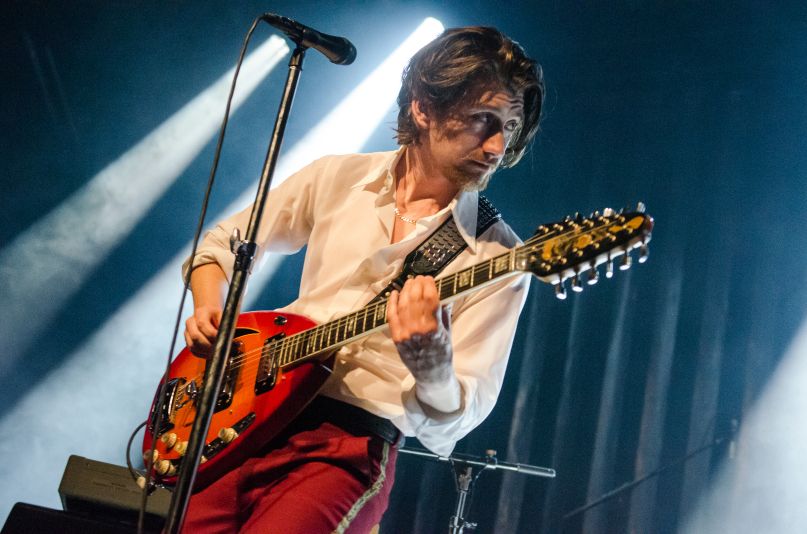 Setting the Stage: It took Arctic Monkeys seven years and five albums to really break through in America. “I Bet You Look Good on the Dancefloor” off their Whatever People Say I Am, That’s What I’m Not debut was a world-wide hit, but subsequent albums failed to catch on as well as they did across the pond. While they remained one of the biggest bands in the UK, it wasn’t until 2013’s smash AM that they entered the headlining conversation in the US. Then, just one year after achieving their long-deserved international success, they went on hiatus.

The move could be seen as letting momentum slip away, but that would ignore the tireless work they’d put in and evolutions they’d undergone in the years prior. Besides which, AM is actually somewhat divisive among fans, with “gatekeepers” longing for the focus on Alex Turner as indie wordsmith and “Tumblr fans” going gaga over the hip-hop-inspired desert rock. Which brings us to the Monkeys’ latest album, Tranquility Base Hotel & Casino, an album that opens with the line, “I just wanted to be on of The Strokes/ Now look at the mess you made me make.” Those drawn into the troop by AM might be thrown off by Tranquility’s single-less, piano-based songwriting, while diehards will surely hail it as a return to peak Turner lyricism. Either way, one thing’s for sure: Arctic Monkeys couldn’t have made Tranquility Base Hotel & Casino without first making AM.

Taking the Stage: That fact revealed itself when the band took the stage at New York’s Brooklyn Steel for one of a handful of warm-up shows ahead of this summer’s arena and festival tour. The lounge-y, lush sci-fi of Tranquility seems jarring next to the blues rock triumph of AM, but set against tracks throughout the band’s catalog, things became clearer live. The band had to push their guitar-based sound to its extreme with AM — which got the most setlist space — before they could scale back the walls of noise while leaping forward artistically.

The Arctic Monkeys set the stage for their big return by opening, well, big with “Do I Wanna Know?”, “Crying Lightning”, and “Brianstorm”. It wasn’t until two more heavy hitters — “Don’t Sit Down ‘Cause I’ve Moved Your Chair” and “Why’d You Only Call Me When You’re High” — that they delivered their first Tranquility track, “Four Out of Five”. The slow-burner is like a glam-y Suck It and See cut or a stoned “When You’re High”, so it was well situated after those two songs. The setlist structure wasn’t always so neat, as chunks felt slow and the band seemed in no hurry to make equipment switches between numbers. Still, the new material was introduced well, with “One Point Perspective” and “American Sports” appearing in their tracklist order after the slower “Cornerstone” and the freakiest track, “She Looks Like Fun”, leading off a ballistic encore that also included “Arabella” and “R U Mine?”.

Tranquility sounds like a major shift for Arctic Monkeys — and it is — but hearing just a handful of the new songs alongside things like Humbug’s “Pretty Visitors” and AM’s “Knee Socks”, you can clearly see how the band’s tectonic plates have moved over the years. An Alex Turner song is still an Alex Turner song, and the Arctic Monkeys are rock’s latest headlining act.

That One Song: It almost feels cheap to say a band’s big debut single can still take the live crown over a decade later, but “I Bet You Look Good on the Dancefloor” is just huge. Even as Lounge Monkeys was highlighted elsewhere, the Whatever People Say track was a surefooted reminder that Arctic Monkeys earned their status as rock and roll headliners years ago. The fact that Turner remains excited by the song, monster-stomping about the stage, as his bandmates tear their claws in deeper than at almost any other time during the set is a testament to their endurance — and talent — as a band.

Let Me Introduce the Band: It’s tempting to give this to the techs and stagehands, who seemed to slip out between every song to tune this or fix that. For sheer sound, though, it has to go to Jamie Cook. The guitarist was not only the most visibly engaging, but he was able to hold down rhythm and lead guitar and keyboards — sometimes all in the same song. It’s no surprise that Turner played off Cook the most, even with an expanded seven- and occasionally eight-person band formation.

Quoteworthy: Turner didn’t say much, but when he did introduce a song, it was with a spot-on quip. “That sound means it’s the end of the round,” he said as a tuning note rang out ahead of the “R U Mine?” finale. “But not without one final question.”

Setlist:
Do I Wanna Know?
Crying Lightning
Brianstorm
Don’t Sit Down ‘Cause I’ve Moved Your Chair
Why’d You Only Call Me When You’re High?
Four Out of Five (w/ Cameron Avery)
505
The Hellcat Spangled Shalalala
I Bet You Look Good on the Dancefloor
Cornerstone
One Point Perspective
American Sports
Snap Out of It
You’re So Dark
Pretty Visitors
Knee Socks
One for the Road
Encore:
She Looks Like Fun (w/ Cameron Avery)
Arbella
R U Mine?