The band returned for their first concert together since 2014 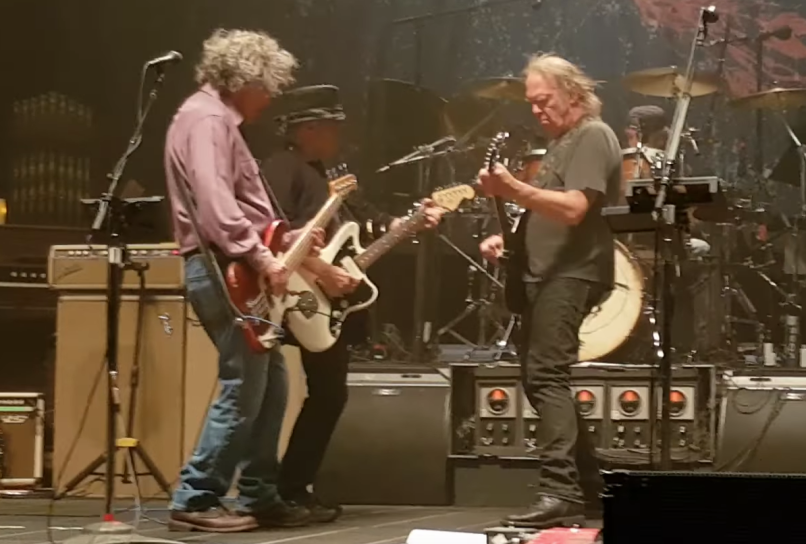 On Tuesday night, Neil Young and Crazy Horse reunited for their first show together since 2014. Taking place at Fresno, California’s Warnors Theatre, the completely unrehearsed gig was the first of a three-night stint Young said “will be the beginning of another beautiful chapter” in the band’s nearly 50 year history

Joining Young in this latest incarnation of the band are drummer Ralph Molina, guitarist/E Street Band member Nils Lofgren, and bassist Billy Talbot, who is back for the first time since suffering a stroke four years ago. Lofgren was briefly a member of Crazy Horse when they first debuted in 1971, and all three musicians were part of the Santa Monica Flyers, whom Young assembled for his 1975 album Tonight’s the Night. (Frank “Poncho” Sampedro, Crazy Horse’s longest tenured guitarist, was absent from the reunion for undisclosed reasons.)

The band opened the show with “Big Time” off 1996’s Broken Arrow, a track they hadn’t played since 2001. Also from that album they performed “Scattered (Let’s Think About Livin’)” for the first time in 22 years. Other highlights from the 15-song setlist included “Cinnamon Girl”, a 14-minute rendition “Cortez the Killer”, and covers of Young’s solo material like “Only Love Can Break Your Heart” and “World on a String”.

Find fan-shot footage of the concert below (via Stereogum), followed by the complete setlist (via Setlist.fm). NYCH have two more shows at the Warnors — tonight and Thursday night — followed by two nights at Bakersfield, CA’s Fox Theater. Anything after that is up in the air.

Encore:
Roll Another Number (For the Road) (Neil Young cover)