"While NOFX is known for their dark, uncomfortable humor, the festival producers of Camp Punk In Drublic are shocked and disappointed by the band’s recent statements" 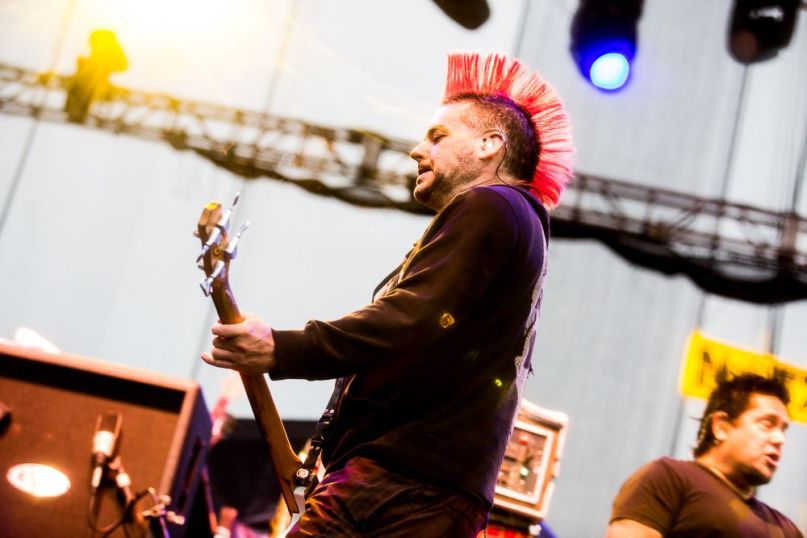 Well, here’s a first. After NOFX frontman Fat Mike and guitarist Eric Melvin cracked some unsavory jokes about the 2017 Vegas shooting last weekend, their band has been booted from the very festival they started. The inaugural Camp Punk in Drublic—itself an extension of NOFX’s one-day, traveling Punk in Drublic festivals—kicks off tomorrow and will no longer feature either NOFX or Me First and the Gimme Gimmes, the latter being Fat Mike’s punk cover band.

“While NOFX is known for their dark, uncomfortable humor, the festival producers of Camp Punk In Drublic are shocked and disappointed by the band’s recent statements about the Route 91 Harvest Festival victims and country music fans,” reads a press release regarding Fat Mike’s removal. “These statements do not reflect the feelings or views of the Camp Punk In Drublic festival, its staff, and its sponsors.”

Replacing them will be punk legends the Descendents, who will play on Saturday, and The Vandals, who will contribute to tomorrow night’s kickoff party.

Fat Mike’s removal comes on the heels of Stone Brewing Co., one of the festival’s sponsors, cutting ties with both the band and the festival over the incident.

NOFX’s comments were made public via footage by X1075 DJs Dave Farra and Jason Mahoney. In the footage, Fat Mike cracks, “We played a song about Muslims and we didn’t get shot. Hooray,” to which Melvin replied, “I guess you only get shot in Vegas if you are in a country band.” The 2017 shooting took place at country music festival Route 91 Harvest Festival.

“At least they were country fans and not punk rock fans,” adds Mike.

In response to the backlash, NOFX posted a statement to their social media accounts, citing their comments as “shitty and insensitive” before promising to “get together to discuss and write an in depth, sincere, and honest apology.” See the full statement below.

Fear not, though, attendees, the weekend will still brim with enough anarchic punk to suit your needs. In addition to the Descendents and the Vandals, the festival will feature the likes of Rancid, Pennywise, The Mighty Mighty Bosstones, The Bouncing Souls, and Lagwagon.

NOFX thought it would be "hilarious" to joke about the October 1 shootings while on stage in Las Vegas. They said "at least they were country fans and not punk rock fans". This is disgusting and callous. We will never support anything involving this band ever again. pic.twitter.com/am3R8QJIE6