Hear the lead single, "Change of Tone", from their upcoming album, Collagically Speaking 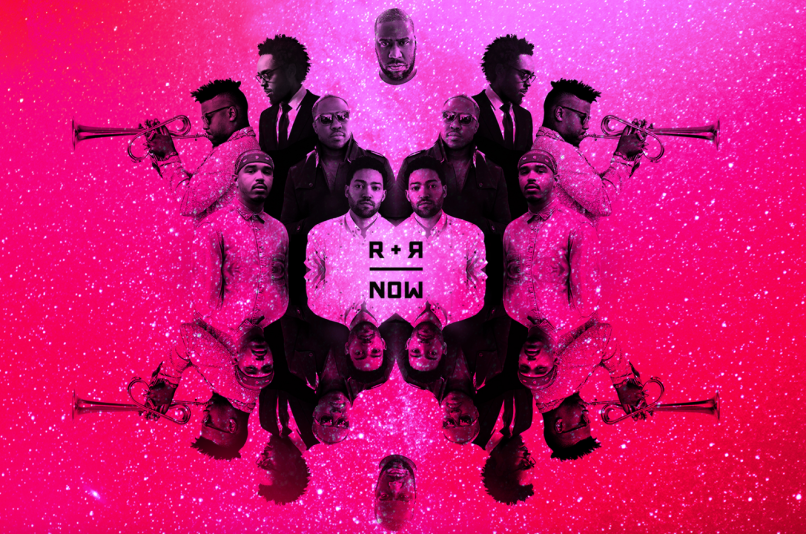 Pianist Robert Glasper recently released an album alongside Common and drummer Karriem Riggins as August Greene, a supergroup formed to celebrate themes of “optimism and black excellence.” Now, Glasper is extending his hopeful, heartfelt point of view with yet another new supergroup, R+R=NOW.

Members include Terrace Martin (with whom Glasper is also in The Pollyseeds) on synthesizer and vocoder, Christian Scott aTunde Adjuah on trumpet, Derrick Hodge on bass, Taylor McFerrin on synth and beatbox, and newcomer Justin Tyson on drums. Glasper assembled the musicians, but describes the group as “egalitarian.”

“Everyone in this band is a six-foot-tall black guy who didn’t come from an affluent background,” Scott says in a press release. “In order for us all to make it into that room together, we’ve had to go through some hell, fight for some things, build up a lot of armor, and do a lot ourselves to forge our realities, to become who we are. We’re all very aware of that, so anytime we get together, it’s a celebration.”

“R+R stands for ‘Reflect’ and ‘Respond’,” Glasper explains, adding that the project was inspired by Nina Simone’s quote regarding it being “an artist’s duty… to reflect the times.” He continues, “When you reflect what’s going on in your time and respond to that, you can’t not be relevant. So ‘R’ plus ‘R’ equals ‘NOW’.”

The outfit’s debut album is called Collagically Speaking and is due out on June 15th. Its 11 tracks, which span a variety of genres and styles, were written in the studio and recorded in a single take, thus allowing them to go “wherever this formidable crew’s mood goes.” “I love the first take because it’s the most honest take,” Glasper says. “There’s something about the spirit of it. I don’t record until I’m ready and I don’t do extra takes just to do it—you burn out. We’d chill, watch some basketball, have some drinks, and hit record when the vibe was right.”

Guest vocalists include Amber Navran of Moonchild and Goapele, while the likes of Terry Crews, Amanda Seales, and Yasiin Bey also contribute. As a first listen to Collagically Speaking, R+R=NOW has shared the seven-and-a-half-minute lead single, “Change of Tone”. Take a listen below.

Check out Collagically Speaking’s artwork and tracklist below.

After playing the St. Lucia Jazz Festival later this month, R+R=NOW will support Collagically Speaking with a tour kicking off on release date, June 15th. A huge number of jazz festivals are on the docket, so check their complete schedule below.