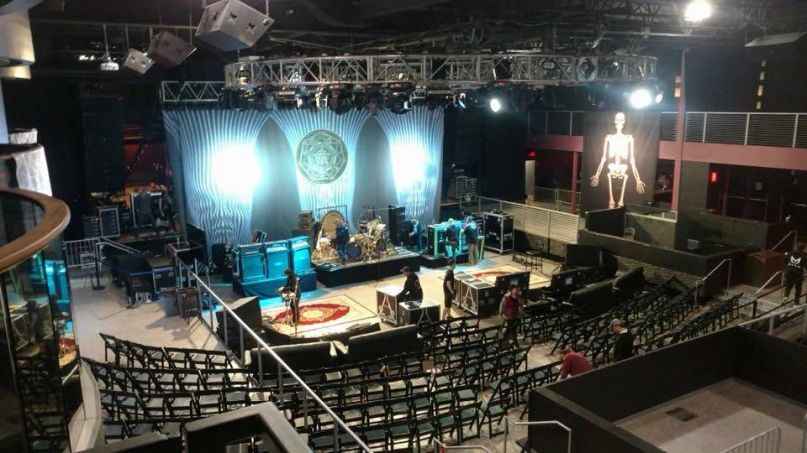 The members of Tool hosted their first in a series of musical clinics in St. Paul, Minnesota on Friday night. The intimate event, which featured guitarist Adam Jones, drummer Danny Carey, and bassist Justin Chancellor, promised to “walk attendees through a handful of the band’s songs, from the process of writing them to playing them live. Audience members [were] also encouraged to ask questions via an open discussion, as well as mingle with the band following the session.”

Naturally, the topic of Tool’s long-awaited new album came up during the Q&A portion. According to attendees of the event (via reddit), Tool confirmed that every song on the album is over 10 minutes in length. The drum portion of the album is fully tracked. Chancellor plans to track the bass parts following Tool’s upcoming festival appearances, to be followed by Jones. Maynard James Keenan’s vocals will be tracked last. They also played fans a new segue featuring Carey “on a modular synth going along with some politically charged vocal sample in the beginning.” The segue, which was in the vein of Tool’s “Merkaba”, will appear on the album, according to Jones.


Elsewhere during the Q&A, Tool was asked why they don’t often change up their live setlist, to which they responded:

“As you can imagine, there was a lengthy response. To summarize: if Justin, Adam, and Danny feel sick or they’re hungover, they can still perform. Maynard, as the vocalist, is simply unable to do so. Certain songs are fucking horrible for his voice. If they want to do these difficult songs, they have to make adjustments like lowering the pitch in which Maynard sings. See: The Pot. Also, songs that they related to and wrote when they were young and angry just don’t translate to who they are today. They feel as if performing certain songs would be like acting like they are who they were 30 years ago and it wouldn’t have integrity.”

You can find a full recap of Tool’s first clinic here. Further clinics will be hosted in Chicago, Indianapolis, Royal Oak, Columbus, and Cleveland, and you can grab tickets here.