2 Chainz, Drake, and Quavo are “Bigger Than You” on new track: Stream

The collaborative track is well summed up by its first lyric: "VIP my squad" 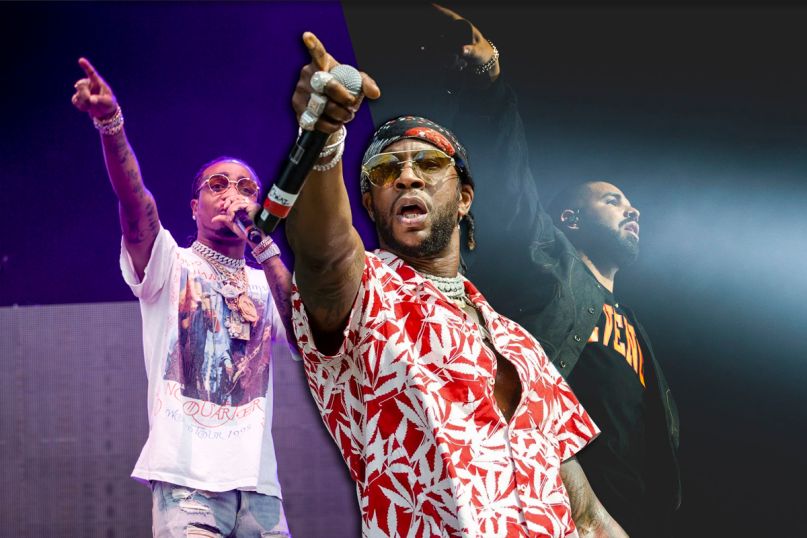 2 Chainz is making a play for collaborator of the year with the amount of tracks he’s showing up on. He hopped on the Black Panther soundtrack with ScHoolBoy Q and Saudi, hooked up with Migos on their Culture II track “Too Playa”, popped up on Royce da 5’9″ and DJ Premier’s PRhyme II album, and even appears on Christina Aguilera’s new Liberation record alongside Ty Dolla $ign. On new track “Bigger Than You”, though, it’s 2 Chainz who’s calling in the featured artists.

The braggadocios bumper features both Drake and Migos’ Quavo. Most of the song is filled with bars talking about how much bigger than everyone else the trio are — “Chain so big, should have came with a kick stand/ Fuck with me, I got a retain on a hit man,” spits Chainz, while Drake talks about his stacks, saying, “Half a million out in Vegas, it ain’t no blackjack, nigga, naw.” Still, the MCs take time to shout out their forbearers and contemporaries, with Drake giving a subtle nod to Logic on his verse and 2 Chainz going out with some throwback praise to Juvenile: “When I was in juvie, I made ’em back out (back that ass up)/ It was 400 degrees, you would have passed out.”