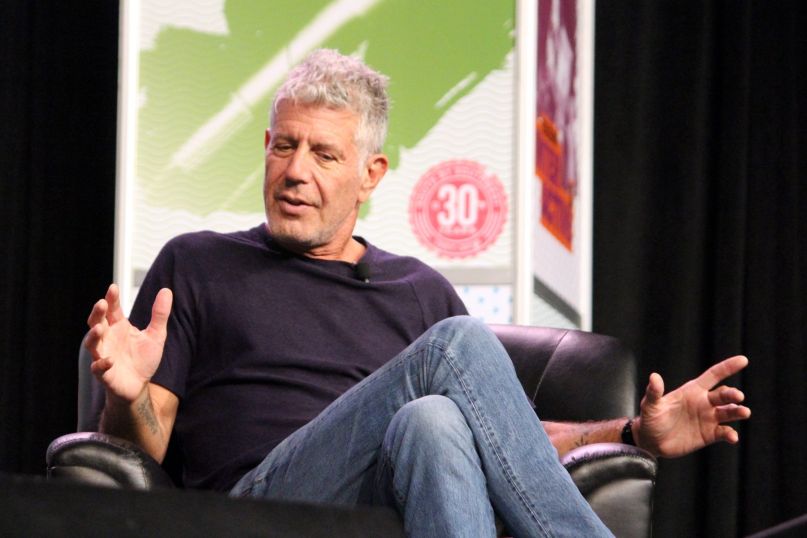 The world woke up to sad news today when we all learned of the death of Anthony Bourdain, the beloved TV personality, chef, and author. The 61-year-old died of an apparent suicide in France while filming an episode of his CNN show Parts Unknown. In the wake of his passing, prominent individuals from former political leaders to rock icons have been paying tribute to the late world traveler via social media.

Former President Barack Obama sent out a picture of himself and Bourdain from an 2016 episode of Parts Unknown shot in Hanoi, Vietnam. “He taught us about food — but more importantly, about its ability to bring us together,” Obama wrote.

Queens of the Stone Age frontman Josh Homme, who appeared on No Reservations and wrote the Parts Unknown theme song with Mark Lanegan, expressed his shock at the loss on Twitter. “Dammit Tony. I’m so sorry,” he wrote. “I’m so destroyed. I love you brother. I miss you too much already.” Lanegan also released a statement, saying he was “heartbroken. @Bourdain was such a positive force in my life and so many others. A great friend and artist. What a sad fucking day.”

Iggy Pop, Tegan & Sara, El-P, the E Street Band’s Stevie Van Zandt, and Against Me!’s Laura Jane Grace were among the many other musicians who sent messages in tribute to Bourdain, as did celebrities like Patton Oswalt, Lin-Manuel Miranda, Neil deGrasse Tyson, Bryan Cranston, and Jimmy Kimmel. Unsurprisingly, a number of celebrity chefs did as well, including Gordon Ramsay, Jamie Oliver, Emeril Lagasse, Sandra Lee, and Tom Colicchio. Perhaps most touching of all, one of Bourdain’s favorite New York City Jewish delis, Barney Greengrass, honored his passing by setting an empty table at their restaurant with his regular breakfast order: a toasted bagel with a Nova Scotia lox and egg scramble.

See all these tributes and more below. CNN has planned a weekend of programming remembering their late host, starting with the special tribute Remembering Anthony Bourdain tonight at 10:00 pm EST. A marathon of Bourdain’s favorite Parts Unknown episodes will air Saturday, June 9th at 8:00 pm, with the previously scheduled Berlin episode debuting Sunday, June 10th at 9:00 pm with a special introduction from Anderson Cooper. The Remembering Anthony Bourdain tribute will then follow again at 10:00 pm.

“Low plastic stool, cheap but delicious noodles, cold Hanoi beer.” This is how I’ll remember Tony. He taught us about food — but more importantly, about its ability to bring us together. To make us a little less afraid of the unknown. We’ll miss him. pic.twitter.com/orEXIaEMZM

Dammit Tony. I’m so sorry. I’m so destroyed. I love you brother. I miss you too much already. My love & condolences to Ariane & Ottaviahttps://t.co/WcTA9wAnfF

I’m heartbroken. @Bourdain was such a positive force in my life and so many others. A great friend and artist. What a sad fucking day

damn, i'm straight up gutted about anthony bourdain. he was brave and foxy as shit. his shows were and will continue to be my comfort food.

I read and loved Kitchen Confidential while I was working as a chef at Groucho St Jude in Glasgow. It was the first book since Down & Out In Paris & London that captured some of the intensity, danger and excitement of life in a kitchen.

Shocked by the terrible loss of Anthony Bourdain. Why is it always the best of us?

grateful i got to shake Bourdains hand once. in a time when it feels like distrust, anxiety and fear of the world is rational his show felt like a reminder that it wasn't and that all of that fear stems from simple lack of connection and understanding.

I loved watching Anthony Bourdain talk, eat crazy food, laugh and drink with people from all over the world. It was a comfort to hear his voice when I was in a hotel room late at night channel surfing. Very sad, but grateful for the 61 years he was doing his thing. ❤️

Damn. Waking up to the news about Anthony Bourdain. Fuck that hurts. No other words, just sadness. Please, if anyone out there needs help… National Suicide Prevention Lifeline: 1-800-273-8255

As a band that has travelled the world for the past 20 plus years Anthony Bourdain has shown us the light in so many ways. We will miss him very much. RIP #anthonybourdain pic.twitter.com/eVVh9rNku3

An intellectual, raconteur, kind soul, who was as real as they come… pic.twitter.com/PgOX1ZqJRL

.@Bourdain was an inspiration to us all. He made himself open to the world in a way few of us are even capable of.

Sending so much love and positive vibes to his family & friends right now. He touched SO many lives, including our own <3 pic.twitter.com/oxikm3TQRt

So sad to hear about Anthony Bourdain. Depression comes in many many forms, it attacks different people in different ways. Tell someone about it. Cling to the raft. Keep going.

Bourdain's exceptional writing made this one formerly picky, fearful eater very brave and want to try everything and I'll always be grateful for him and the worlds he opened

I’ve brushed up against this darkness and I know it’s a tempting exit but REACH OUT to ANYONE. Stay on this side of it — in the light and warmth. Where you get to try again, every day.

A friend of @StarTalkRadio. A friend of Food & Culture. A friend to us all. Anthony Bourdain, RIP. (1956-2018). pic.twitter.com/uVqEgldGsL

My deepest condolences to his families and loved ones. He sometimes spoke of his battle with depression. I am saddened to hear it took him from us while he still had so much left to share. https://t.co/MDMXlDZdNX

Maybe we all wanted to hang out with him. He was that cool, fun, frank, insightful. He introduced us to distant lands and to people with different traditions. And without ever preaching, he reminded us that we humans are far more alike than different. Thank you Anthony Bourdain pic.twitter.com/QMznx4JMhS

According to AFSP, there are nearly 45,000 suicides every year in the US. Shocking. I was saddened to hear of the deaths of Kate Spade and Anthony Bourdain. RIP. It illustrates that success is not immune to depression. We all need to be more aware of our friends who are suffering

Goodbye, Anthony Bourdain. The world is less interesting today. Thank you for all you gave us

This is a man I admired greatly. Sending love to Anthony's family, friends and fans on this sad day. pic.twitter.com/70tQ7s4Lw0

Stunned and saddened by the loss of Anthony Bourdain. He brought the world into our homes and inspired so many people to explore cultures and cities through their food. Remember that help is a phone call away US:1-800-273-TALK UK: 116 123

I have to say I’m in total shock to hear that the amazing @Bourdain has just died ???? he really broke the mould, pushed the culinary conversation, Rest in peace chef ????‍???? ???? thoughts and love to all his family and close friends xxxxxxxxxxx pic.twitter.com/HB7sV7CeRH

Tony Bourdain made the world a smarter, better place, and nobody will forget him—especially not the people who wish they could. My heart goes out to his family and friends. pic.twitter.com/xcWiI2b97C

I’m shocked and extremely saddened by the tragic loss of such an inspiring man. Tony was a great soul, a mentor, a friend, a father, and an incredible chef.

For some reason I have been listening to this song and watching this video all week. I now know why. It’s about loss and longing and ultimate love. I want to dedicate this to Anthony Bourdain, our Culinary Nightbird. May he Rest In Peace Forever. https://t.co/OkhDSeq0nK

Anthony was my best friend. An exceptional human being, so inspiring & generous. One of the great storytellers who connected w so many. I pray he is at peace from the bottom of my heart. My love & prayers are also w his family, friends and loved ones. pic.twitter.com/LbIeZK14ia

RIP doubtful. Tony’s restless spirit will roam the earth in search of justice, truth and a great bowl of noodles. @Bourdain

Stopped by Les Halles in NY, where people are paying their respects to Anthony Bourdain. pic.twitter.com/KC7FuClHgE