As the World Lost Its Sense of Wonder and Majesty, So Did Jurassic Park 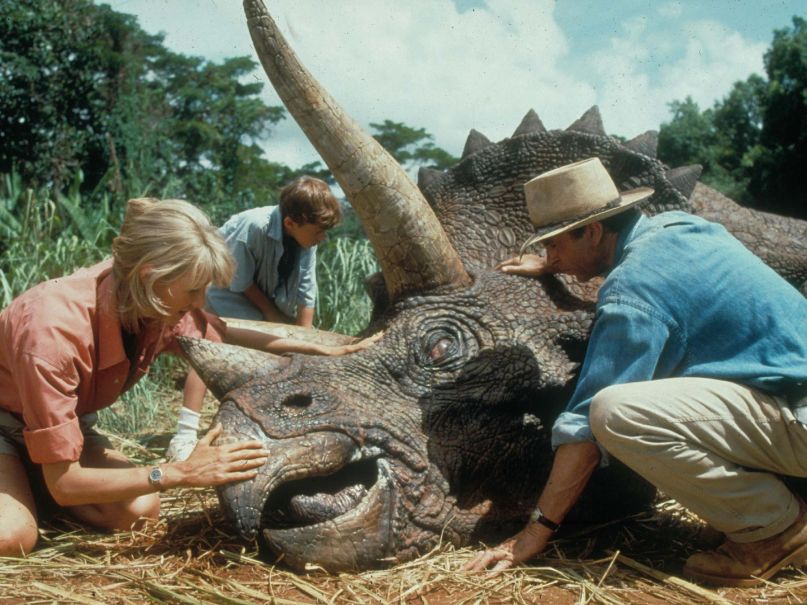 It’s now been just a hair over 25 years since Jurassic Park arrived in theaters to capture the spellbound imaginations of an entire generation of moviegoers. Steven Spielberg’s blockbuster opus took Michael Crichton’s 1990 best-seller about the rapid decline of an island theme park populated by resurrected, genetic-engineered dinosaurs and turned it into one of Hollywood’s most iconic modern movies. It was virtually everything that any viewer could want a big-budget summer movie to be: funny, breathtaking, frightening, relentless in its breathless momentum. It took a high-concept sci-fi premise (what if the dinosaurs came back?) and sprinted away with it, not only managing to inspire countless breakthroughs in realistic CGI that even films released now are still trying to match, but offering a vision of how truly great a summer blockbuster can be in the right hands.

Since then, there have been four more Jurassic Park movies, and in the interest of no further belaboring an already common point, none of them have been anywhere near as good as the original. That’s true of most long-running film franchises, to be fair, but the decline between each installment in both quality and artistic ambition is especially pronounced when it comes to the Jurassic films. It’s hard to say what’s caused it, as there are several directions in which anybody could point and have at least a little bit of a solid argument on their hands. Was it the changing times? The alterations in audience and cultural taste? The parade of subsequent filmmakers who, while mostly talented in their own right, were not Steven Spielberg? Was it the deviation from Crichton’s source novels? The invention of newer, more elaborate dinosaurs? The presence of Jimmy Fallon? Where exactly did it all go wrong?

Our simpler argument is that the Jurassic movies lost the plot after the first, when they attempted to start being all things at once to their audiences. To an end, the 25-year series has directly followed cultural shifts in America and elsewhere, to say nothing of the seismic shifts within Hollywood during that period of time. Studios got bigger and began buying each other out. Theaters went from one or two screens to a dozen or more as standard industry practice. The budgets got bigger, and with them, so too went the expectations. It wasn’t enough to have a line out the door on opening weekend; studios wanted that for the entire month. The era in which a movie could come out and draw through word of mouth was long over, but by the early ’90s, months-long hype campaigns were beginning to take shape for each major motion picture. An event movie wasn’t just big on its own; it was an event for the sake of all the ancillary profit to be made around it, from anywhere willing to keep up its own end of an endorsement deal.

Even by 1997’s The Lost World, the changes were apparent. Spielberg’s sequel still has its share of memorable setpieces and thrills, from the terrifying cold open to the climactic race through San Diego. However, that last sequence, for as goofily enjoyable as it may be, exposed The Lost World as a far less thoughtful companion piece to its predecessor. If Jurassic World could be argued as one of the best-made, most articulate B-movies ever made, The Lost World hews far closer to the schlock you might expect out of that description. The first half of the film, which once again takes place on a remote island, involves raptors being deposed through gymnastics and skilled wildlife predators being outwitted by thinly-drawn characters. The second involves a 76 gas station ball rolling down city streets as a T-Rex goes wild. In either half, The Lost World may be fun, but it’s also more than a little dumb and decidedly a letdown after the headier, more considered thrills of the original.

At least The Lost World is still fun, where much of what would follow loses that sense. Joe Johnston, a gifted journeyman filmmaker, took over for Jurassic Park III in 2001 and leaned even further into the creature-feature trappings of the franchise’s core premise. Between the infamous dream sequence and several of the dinosaur battles, the third installment descends into full-on camp at points, reducing the series’ thrills to a series of jump scares built around a half-hearted rescue operation. III is more interested in horror than action; the sense of grandeur that even the most dangerous dinos had in the original film was, by this time, almost fully substituted for terror. Dinosaurs weren’t something to marvel at; they were something to scream about until each subsequent cash-in sequel reached its end. Johnston does his best to elevate the proceedings, but by the early aughts, the Jurassic movies had already lost the plot. They weren’t films about majesty beyond the audience’s wild dreams, but instead vessels for the kind of cheap thrills that viewers can get in so many other places.

After that, it took 14 years for Universal to try again, but doing so would only push the series further ashore. Jurassic World is a gangly beast of a movie, an assemblage of old plot points and loose continuities and hybrid dinosaurs that made over $1.5 billion worldwide while also sticking a raptor-length claw into the heart of whatever sincerity remained in the franchise. From the vulgar, omnipresent product placements to the endless callbacks, there’s virtually nothing about Jurassic World that brought anything new or valuable to the table, perhaps aside from an increased awareness among child audiences of the Brookstone brand. It’s a full evening’s entertainment, full of noise and spectacle and endless CG style, but it arrives at a point in the franchise at which even Isla Nublar itself is now shaped by the fakery of so much modern non-location shooting.

Now, with this weekend’s release of Jurassic World: Fallen Kingdom, it’s hard to say where the franchise can really go from here. We’re already across the rubicon of mixed-DNA dinosaurs to the point where much of Fallen Kingdom is built around the reveal, explanation, and subsequent destruction and killing spree of the new creature, much as Jurassic World focused on the Indominus Rex. It’s a Jurassic movie for the DCEU generation, all oversaturated dark colors and glowering leads and a privileging of big onscreen Moments over actual thought or cohesion or drama. Where once Jurassic Park suggested a future full of infinite possibilities, its sequels have spent the next quarter-century proving how little imagination it actually has left for any of those possibilities.

Previous Story
“Hi, Mikey!”: Child’s Play is returning as an 8-part TV series
Next Story
Lump on How the Duo Met at the After-Party of a Neil Young Concert
Popular
More Stories
[fu-upload-form form_layout="media" title="Submit Your Photo"][input type="hidden" name="ugc" value="1"][/fu-upload-form]