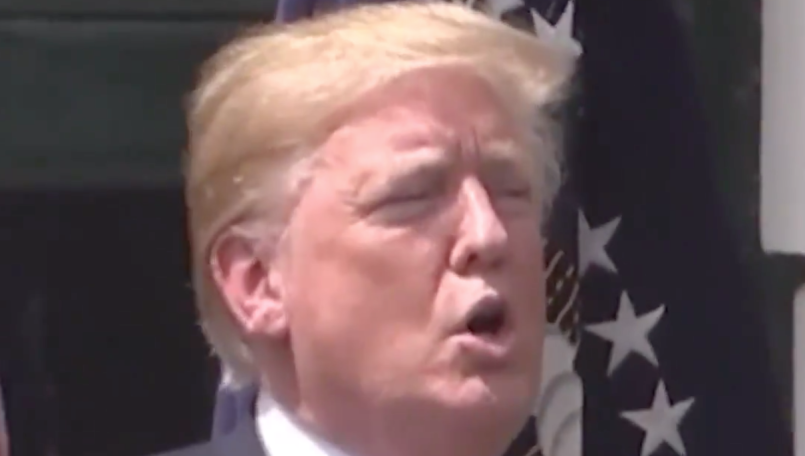 Trump trying, and failing, to sing the National Anthem

Donald Trump has the country embroiled in a full-fledged culture war over a false narrative that any athlete who kneels during the National Anthem is an ungrateful “son of a bitch” who doesn’t respect our troops. In actuality, those athletes who’ve chosen to kneel have done so in protest of police brutality and other forms of systemic racism. Trump’s narrative is even more bullshit when you consider the fact that it was Nate Boyer, a former U.S. Army veteran -turned- NFL player, who recommended Colin Kaepernick take a knee, rather than sit during the National Anthem. Kaepernick’s actions, of course, inspired others to take a knee, thus leading to the the current “controversy.”

Also making Trump’s narrative complete dogshit is the fact that 1.) he himself is a draft dodger who used bone spurs to get out of Vietnam, and 2.) he doesn’t even know the god damn lyrics to either The National Anthem or “God Bless America”. We were first made aware of Trump’s unfamiliarity with the Anthem when he failed to sing it correctly during the National College Football Championship earlier this year. He’s had several months since then to learn the lyrics, but he apparently didn’t bother, because he again struggled to sing along to the Anthem when it was played at his bullshit “Celebration of America” ceremony held at the White House today in place of the Philadelphia Eagles’ Super Bowl celebration, which Trump canceled after learning that only three of the 52 players planned on going. It’s also worth noting that not one Eagles player kneeled during the Anthem in 2017.

Trump, just now singing the national anthem, missed the words “were so gallant” and then picked up again with “-ly streaming.” pic.twitter.com/gmPGi83ASN

I like how the camera conveniently pans away right when Trump forgets the words pic.twitter.com/VsaqJsyUNb

He was even more lost singing “God Bless America”:

Trump unable to remember words to "God Bless America" at replacement event he commissioned to prove his patriotism: https://t.co/LrMPaCEnen pic.twitter.com/oCcWMX9g39

Keep slurping up his bullshit.