Film Review: Action Point Attempts to Thrill the Masses, But Shows Its Age 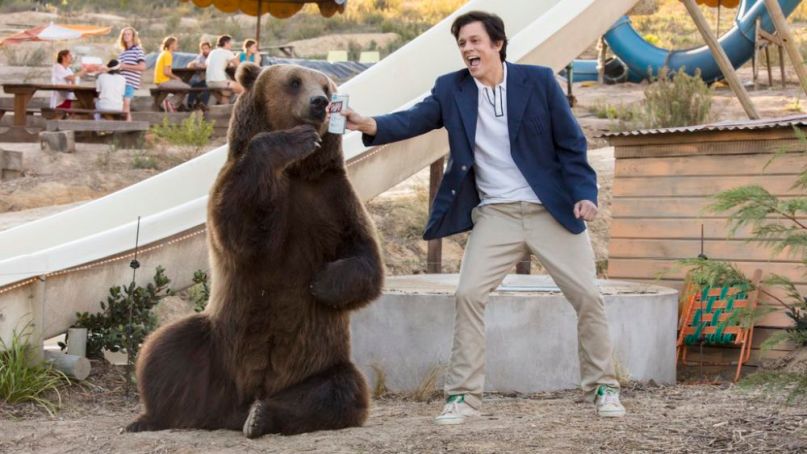 Action Point feels particularly unstuck in time, even by the standards of movies built around niche celebrities whose times in the spotlight has already come and gone. Fifteen years ago, a movie starring two of the faces of Jackass would’ve been a buzzy hit, a lark offering the chance for audiences to participate in the time-honored tradition of watching people with a remarkable lack of regard for their own safety eat shit for the entertainment of the masses. Johnny Knoxville made his career on this sort of fare, but Action Point is curious in that it’s just as interested in being a vehicle for Knoxville the character actor-turned-leading man as Knoxville the reckless daredevil. It’s an appeal for his merits as an all-around performer, long after the world cemented him as a man fated to pratfall for our entertainment.

If the film’s existence feels a bit dated in and of itself, Action Point gives that impression early and often in its story and delivery as well. It’s strange to find oneself drawing on Joe Dirt as a key stylistic influence, but here we are, as much of Action Point unfolds in flashbacks while an elderly D.C. (Knoxville, once again bathed in old man makeup) tells his granddaughter stories of the good ‘ol days. For D.C., those were his halcyon days running the titular backwoods amusement park in the late 1970s, where the Schlitz flowed freely, the times were good, the girls were pretty, and “there weren’t so many rules.” D.C. takes several shots at the modern-day “nanny state” throughout Action Point, and the closest thing the movie seems to have as a thesis is that we were all better off when we could disappear off the grid, get into some generally harmless trouble, and maybe destroy some property or our own bodies along the way.

Action Point is essentially a death trap, an outdated carnival-esque park full of cracked slides, grinding fairway rides, and occasionally a local brown bear. D.C. is an enthusiastic ringleader, equally full of love for the locals who’ve grown up on his rides and the “Shitbirds,” a group of local teenage ne’er-do-wells who come back every summer to enjoy themselves, loosely police the rides, and drink and smoke themselves into nightly good times. He has a little bit of help from Benny (Chris Pontius), who’s the second closest thing to an authority figure at Action Point when he’s not flirting with girls or practicing with his katana. Action Point’s only real rival for D.C.’s affections is his daughter Boogie (Eleanor Worthington-Cox), who lives in New York City with D.C.’s ex-wife, and comes back to live in the woods with her dad for the summers. When a local amusement park conglomerate attempts to encroach on Action Point’s land, D.C. and Boogie and the Shitbirds find themselves engaging in the kind of hijinks that both movies and society used to enjoy more often when we had “a little thing called personal responsibility.”

There’s a lot of talk of days gone by throughout Action Point, to such an extent that even the film’s R-rated penchant for four-letter words and porno mags feels oddly quaint, in its way. For all of the film’s insistence on repeatedly assailing Knoxville’s penis with pressure washers and well-placed objects, Action Point ultimately aspires to being a Jackass take on fare like American Graffiti or Dazed and Confused, an ode to simpler times, when the trouble we got into was more innocent and not everything was taken so seriously that it ended in a lawsuit. Between the various slimy lawyers and businessmen offered throughout, and the revelation that the adult Boogie turned into a helicopter parent, Knoxville and director Tim Kirkby are clearly interested in wistful nostalgia and nothing more. As such, the movie is reasonably successful in its own modest way; its interests go no further than offering a handful of pratfall-driven laughs, and a few lessons about kicking back and cutting loose before you miss out on the simpler pleasures of life.

It’s strange to see Knoxville romanticizing his own origins in the Norman Rockwell mode, but Action Point finds the unlikely star at a transitional moment. At 47 years old, Knoxville is no longer the young buck who once giddily hurtled himself into one dangerous TV stunt after the next. Even in 2010’s Jackass 3D, it was clear that he and his team were beginning to age out of being excited about taking more punishment, and now this film’s occasional breaks to allow D.C. to be catapulted through the side of a barn or blasted down a waterslide by force feel like reluctant concessions. This is a movie born out of a star who wants to have a little more to say, but one who only became a star because of the very specific thing he was good at saying, and without words at that. As such, Action Point will deliver the “holy shit, did you see that?” thrills and spills that audiences want, but probably not the larger message that it sporadically aims to impart.

The old-man framing device feels equally appropriate for Action Point, and not just as Paramount’s best attempt to cash in on the surprising success of Bad Grandpa. Knoxville has been working the old-man bit since the early Jackass days, when Spike Jonze was doing it alongside him, and it’s followed him deep enough into his career that it now feels like more than just a gag. At this point, Knoxville is knocking on being that old man, and yet Action Point still goes out of its way to drop him on his head for a quick laugh. There’s something perversely admirable about his capacity to keep going back to that comic well, as there’s always been, but now there’s something a little sad about it as well.