Film Review: Gotti Turns a Lifelong Mobster Into a Folk Hero, and Does It Poorly 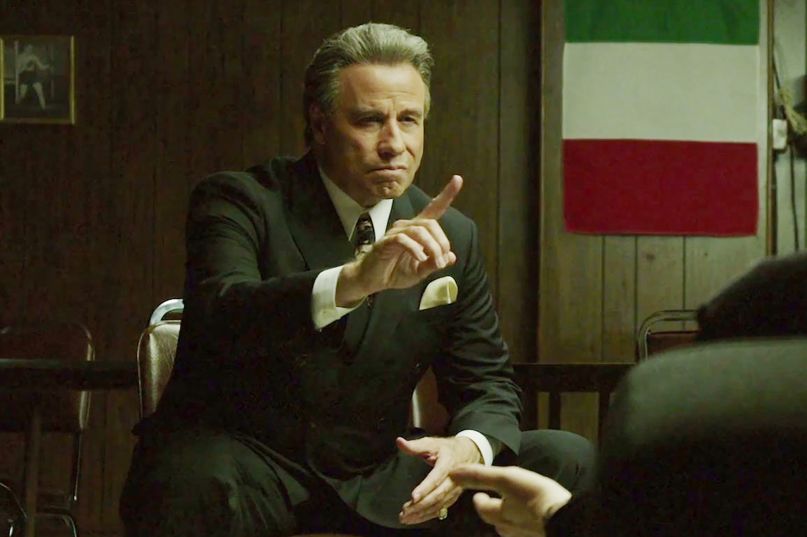 It’s hard to say for certain what defines a truly great biopic, but it’s significantly easier to observe that Gotti is far from being one among them. If it’s the insight that a thoughtful, well-made feature based on actual people can offer about those people and the times which shaped them, Gotti offers little to none. If it’s a richer sense of context about the era and place in which their notable works took place, this cheap-seeming crime feature actively struggles to maintain that throughout. If it’s convincing makeup and hairpieces, even, then those too are in short supply. Gotti attempts to lionize the life and times of famed New York mafia don John Gotti, but succeeds only in proving just how miraculous films like The Godfather and Goodfellas really are by offering a blindingly pale imitation.

The infamous Gambino crime family, its ball-busting hangout sessions, and its violent methods of intimidation and racketeering form the basis of much of Gotti, which as a film is vastly more interested in the machismo and mythology of organized crime than in anything resembling an interrogation of its ethics or politics. This is a version of ’70s and ’80s NYC as filtered through so many movies about that place and that time, from the grimy, VHS-quality transitional shots to the instant-recognition pop music cues, which would be fine if Gotti  actually had anything new to say within that milieu. Instead, director Kevin Connolly simply frames the film as a pastiche of mob movie cliches, played out over 105 minutes. Hard-hustling street kid works his way up the ladder through charisma and loyalty. Mobster begins to lust for more power than his station allows. Hubris and staunch traditionalism wind up being his downfall, and there’s now a son of his involved to illustrate the passage of time.

Again, this can be the stuff of stirring American filmmaking when handled with some thought and nuance, but Gotti substitutes those for endless braggadocio and an incorrigibly hammy leading turn from John Travolta. Granted, even in its latter-day form, Travolta’s charisma is still enough to command a movie screen, and some of the scenes in which he’s given the most room to play to the cheap seats (particularly in his blustering late-film monologues to his fellow mafiosos) are the closest Gotti comes to something truly engaging. The problem with Travolta’s specific brand of ham, however, is that there’s no point in Gotti at which anybody in the audience will believe that they’re watching John Gotti. Both film and actor make it transparently obvious that they’re in the business of Travolta doing Gotti, aside from the handful of scenes in which he comes off like Travolta doing Alec Baldwin as Trump doing Gotti.

Much of Gotti comes off as a Travolta vanity project at large; his real-life wife Kelly Preston plays Gotti’s wife Victoria, and the whole of Lem Dobbs and Leo Rossi’s screenplay feels custom-built to give Travolta as many opportunities as possible to make a meal of its meager material. The film blows through key beats in Gotti’s life with all the verve of a Wikipedia entry, jumping from incarcerations to bloody showdowns to shouting matches over prison phone lines with little in the way of style or elegance. At times the film is so choppily edited that it’s actively jarring, with characters’ lines frequently cutting out before the scene can naturally move on, just to get to the next beat. Even the loosely committal use of a framing device, involving Gotti’s arguments with his son Junior (Spencer Lofranco) over whether the latter should take a plea deal to leave the mafia and protect his family, offer little in the way of dramatic heft or even coherence.

When the film isn’t simply boring, it becomes unintentionally hilarious in its occasionally inept production. For a period-set feature, several of the music cues are a notable distraction, especially the moment in which a 1983 block party is set to Pitbull’s “Don’t Stop the Party.” The time gaps are occasionally incomprehensible even with onscreen titles, and at least once before the film is over, a character’s monologue cuts so abruptly to his funeral that it actively carries the cadence of a comic beat. When Gotti isn’t ripping off other, better crime movies, it has virtually no identity of its own, and what it finds in Travolta’s preening turn is hardly enough to justify much of anything about it, particularly when it gets to its unpleasant thesis, the one about Gotti as a misunderstood cult hero and victim of government harassment.

All men contain multitudes, but John Gotti is infamous specifically because of his gifts in the fields of shakedowns and murder, and for Gotti to spend the entirety of its runtime fawning over his legacy feels grotesque, to say the very least. It then becomes something even worse late in the running, when the film gets around to the events of Gotti’s 1992 conviction and incarceration for racketeering and murder. Real-life footage of riots over Gotti’s conviction are aligned with Gotti narrating (seemingly from beyond the grave) about the relative simplicity of the olden days of crime, back when there were rules and life was simpler. If you find yourself still wondering exactly which olden days the film is driving at, that point is made best by a New Yorker yelling in archival footage about how the streets were safer under Gotti than when “the primates are taking over.” Gotti‘s only real purpose is to fetishize a different, more socially acceptable form of gangbanger, and for all of its fundamental flaws, that may be the most glaring one of them all.