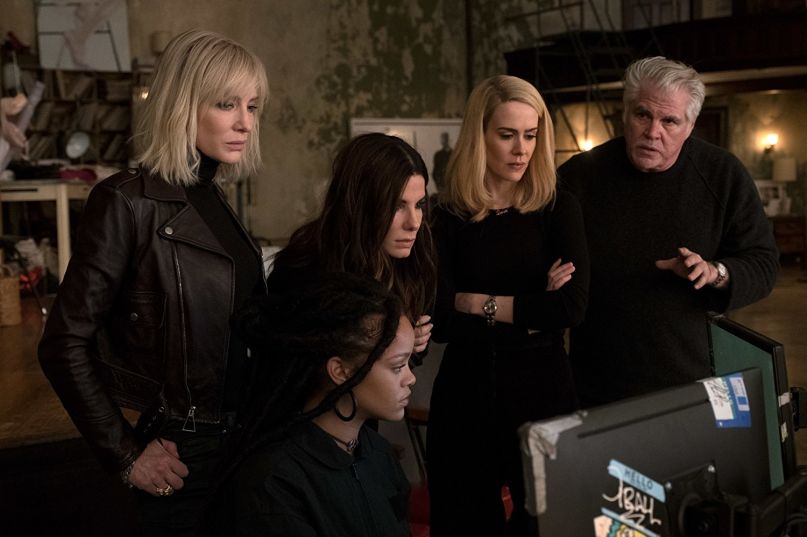 “Somewhere out there is an eight-year-old girl lying in bed, dreaming of being a criminal. Let’s do this for her.”

That’s the pep talk that Debbie Ocean (Sandra Bullock) gives her band of thieves as they prepare to rob the Met Gala blind, and as a thesis statement, one could do worse. Ocean’s 8 is doing it for that little girl — or to be precise, it’s doing it for a bunch of little girls, who are lying in bed, daydreaming about cool, fun, lightweight movies about women where the women do something beside fall in love. A lot of those fall-in-love movies are great, and a lot are not, but rare is the piece of fluff that comes along where the story isn’t boy-meets-girl. Here, the story is girl gets out of prison, girl reunites with other girl, girls recruit a team of uniquely skilled women, and together they break a number of laws.

Unfortunately, Ocean’s 8 is unlikely to be the film of our hypothetical girl’s dreams. It’s a little flimsy, a little rote, too paint-by-numbers in places and a bit lacking in spark and magic throughout. All the same, it’s a fun movie, an engaging summer diversion with a dynamite cast and some eye-popping costumes. “It’s not what I dreamt it would be,” that little girl might sigh. But then she’d grin a bit, and add that she liked it all the same.

Put more plainly: if Steven Soderbergh had directed this thing, it might be a hell of a lot more exciting. Directed by Soderbergh’s friend Gary Ross (with Soderbergh producing), Ocean’s 8 is a zippy not-quite-sequel to the former director’s heist movie trilogy, which wrapped up its own timeline more than a decade ago. Here the ringleader is Danny Ocean’s sister Debbie, who opens the film by letting a few well-practiced tears fly in her parole hearing as she assures the board that all she wants is the occasional walk in the fresh air, and of course, an honest living. Moments later, she’s gathering her belongings in a daring cocktail dress (one of several instances in which Sarah Edwards’ costume design helps tell the story) and arranging one last bit of smuggling business with a prison guard. There are some walks, but as Bullock’s appealing insouciance makes clear, there was never any chance at an honest living. Ocean is the LeBron James of jewelry theft. She was born for this.

But as with LeBron, there’s only so much a superstar can get done without the right team. (This concludes the basketball portion of this review.) Enter Lou (Cate Blanchett, the LeBron James of wearing hot pantsuits and making sex eyes at her fellow thieves, fin), Debbie’s old partner, who gets swept up in the scheme despite her better judgment. The plan is all Debbie, the recruitment strategy largely Lou’s. There’s Rose Weil (Helena Bonham Carter), a designer whose massive debts have her inches away from prison herself; jewelry expert Amita (Mindy Kaling); Nine Ball (Rihanna, a delight), a weed-smoking, heavily skilled hacker; pickpocket extraordinaire Constance (Awkwafina); and Tammy (Sarah Paulson), a seemingly milquetoast suburban mom with a seeming addiction to fencing appliances. All, save for perhaps Rose, were made for this kind of job, and one wandering Irish accent aside, so were the actors.

They’re so good, and so good together, that the biggest downside of Ocean’s 8 is how little it does to highlight them. The focus here is all plot, and while the actual heist is a winner, the film’s plodding approach to it minimizes the pleasure of watching it unfurl. The wrinkles are few, both in the lead-up to the event and in its execution, and so a significant chunk of the film’s 110-minute runtime is spent describing the scene that’s about to happen, which then happens. The few hiccups they encounter are dispatched quickly, albeit with flair — a scene between Bonham Carter and Kaling in the basement of Cartier comes to mind — and the film moves on, leaving countless opportunities to watch these women backtrack, improvise, and scheme their way out of trouble on the discard pile.

It’s no surprise then that the character, and performer, that fares best is the one who encounters the most trouble — the one that actually maneuvers through the plot, as opposed to gliding atop it like some well-heeled felonious goddess. That would be Anne Hathaway’s Daphne Kluger, the celebrity serving, as Rihanna herself did this year, as honorary co-chair for the gala. It’s on her neck — one of the best necks in the world, we’re told — that the diamonds they aim to steal will hang. The whole cast seems to be having a good time, but Hathaway’s good time is on an entirely different level, and she vamps, sighs, and grins her way through the film like she has the best job in the world, and it’s easy to believe her. A lesser performer might mistake vanity for vapidity, but Hathaway’s performance crackles with intelligence; another might render her insufferable, but Hathaway makes her the kind of woman you feel you ought to despise, even as she inexorably charms you.

The seven thieves and their mark are so entertaining that it’s easy to ignore how flimsy the whole affair is — how little the screenplay, by Ross and Olivia Milch, cares about relationships, even as the actors heroically yank them into existence; how disinterested Ross is in capturing the frenzy of an event the size of a Met Gala, bypassing spectacle and atmosphere in favor of cameo after cameo. (The appearance of Anna Wintour should make it plain that Ocean’s 8 never approaches the Gala itself with anything less than the respectful gloss of publicity photos.) There’s not one scene that approaches the grandeur of the Ocean’s 11 sequence in which the conspirators watch the Bellagio fountain dance, and while Ross imitates some of Soderbergh’s clever cuts, there’s none of the electric energy that made even 12 and 13 minor delights. It’s Ocean’s Lite. Tastes great, less filling.

The shame is, for as engaging as the trilogy remains, that cast had nothing on this one. Ocean’s 8 is an enjoyable film, even if the relationships are a little hollow and the twists somewhat easy to predict —  count the members of Debbie’s team, and you’ll be able to see at least one plot twist coming before the film even starts. Still, it’s hard not to daydream about the film that might have been. With energy like this, the kind of energy likely to have audiences willing Bullock and Blanchett to swear off dudes and get together, an Ocean’s film should steal the breath from your body. Instead, it’ll draw some sighs, some smiles, and fervent hopes for a sequel more worthy of its cunning, charismatic thieves.