Film Review: Set It Up Is a Fine, Breezy Rom-Com for the Start of Summer

A lighthearted romp that hardly reinvents the wheel, but does what it does quite well 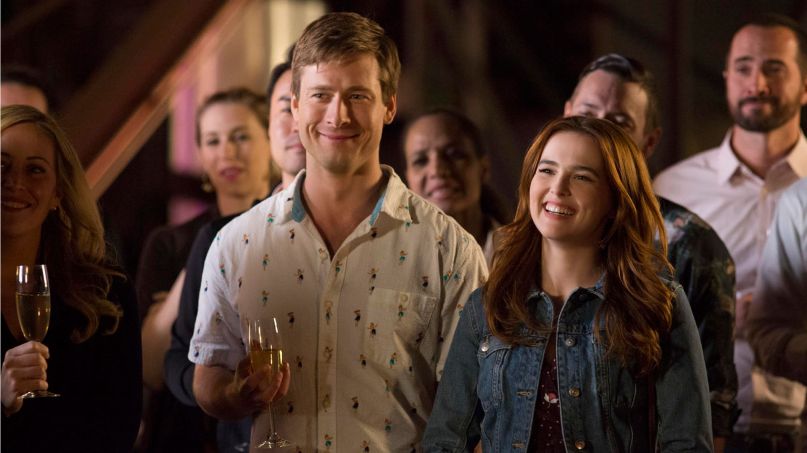 There’s a specific kind of pleasure that comes from watching a movie that knows exactly what it wants to be. It’s a phenomenon most often associated with schlocky action movies or horror thrillers, but it can apply to romantic comedies as well, and Netflix’s latest original film Set It Up is one such perfectly calibrated example. Set It Up doesn’t make any attempts to step outside its genre sandbox — it’s content to build a perfectly nice sandcastle right in the middle of it. That, coupled with the fact that the film is available for at-your-leisure viewing, makes Set It Up the perfect breezy, New York-set romantic comedy to kick off the summer season.

Set It Up takes its cues from either Cyrano de Bergerac or The Parent Trap, depending on which one of its central characters you listen to. Those characters are Harper (Zoey Deutch, Everybody Wants Some!!) and Charlie (Glen Powell, also Everybody Wants Some!!), two overworked assistants forced to keep impossible hours on different floors of the same office building. After a late-night meet cute in the lobby, Harper and Charlie come up with a scheme to earn themselves some extra free time: if they can get Harper’s icy but admirable sports reporter boss Kirsten (Lucy Liu) and Charlie’s demanding investment banker employer Rick (Taye Diggs) to fall for each other, the two assistants are bound to wind up with lighter workloads. And since they manage their bosses’ schedules and know virtually everything about them, it’s not long before Harper and Charlie are playing God in a real-life romantic comedy featuring two unwitting participants. Of course, all that scheming naturally leads Harper and Charlie to spend a whole lot of time together too — despite the fact that Charlie is dating a vapid model and Harper has a potential new Tinder love interest on the horizon.

Set It Up isn’t exactly a meta romantic comedy, but it’s one that clearly has a deep knowledge of and appreciation for the genre. Katie Silberman’s script leans into some tropes while subverting others, but for the most part always seems to know when it’s doing which. There’s a gay best friend (Pete Davidson), a desperate rush to the airport, and a “trapped in an elevator” scene, but all of those clichés are tweaked or commented upon in one way or another. In terms of bucking rom-com conventions, the only real misstep is Charlie’s disappointingly one-note model girlfriend (real-life supermodel Joan Smalls), who never feels like anything other than an obstacle.

Silberman’s dialogue sometimes resembles the rat-a-tat patter of a screwball comedy, and at others offers the quirky contemporary frankness of something like Girls. In both cases, it’s winningly brought to life by the film’s game cast. Deutch is a wonderfully endearing rom-com lead who’s equally adept at both comedy and pathos. Though Harper borders on being a little overly twee at times (she can be brought to tears just by thinking about inspirational moments in sports), Deutch grounds those eccentricities in recognizable humanity.

Meanwhile, Liu seems to be having the time of her life getting to play a sports-world take on Miranda Priestly. Whether she’s passive-aggressively flipping her high ponytail, strutting through her office in a perfectly tailored bright red pantsuit, or exposing the layers of vulnerability beneath Kirsten’s chilly demeanor, Liu throws herself into the role with zeal. Elsewhere, Diggs has fun playing against type as a character who’s as bullishly aggressive as he is suave. Diggs isn’t given as much meaty material as Liu, but he does get a great drunk scene. Unfortunately Powell — though a believable would-be venture capitalist and a solid comedic actor — isn’t quite as convincing at the romantic portion of the rom-com formula. He’s the weakest link among the main cast, although not disastrously so. It doesn’t help that Charlie loses a bit of his comedic edge as he grows to be a better, more thoughtful person through his friendship with Harper.

Despite some notably messy sound mixing and a few strange editing choices, Set It Up is a confident, competent effort from prolific TV comedy director Claire Scanlon — who’s had plenty of experience on rom-com TV shows like The Mindy Project and Selfie as well as Unbreakable Kimmy Schmidt. Scanlon blends the lower-key hangout vibe of ‘90s rom-coms like When Harry Met Sally and Four Weddings And A Funeral with the glossy, heightened aesthetic of post-aughts fare like 27 Dresses and How To Lose A Guy In 10 Days. There are a few moments where the comedy goes a bit too broad, but they’re thankfully few and far between, and a delightfully strange bit part played by Tituss Burgess helps sell even the film’s weakest scene.

Set It Up loses a bit of pep in its second half, as the film zooms toward inevitable conclusions. But what it lacks in originality in its romantic arcs, it makes up for with some unexpectedly strong friendship dynamics, especially in Harper’s sisterly relationship with her roommate Becca (Search Party’s Meredith Hagner). Though the film splits its time between Charlie and Harper, it’s clearly far more interested in its female characters than its male ones, and Set It Up feels most original when it’s exploring the lives of career-focused women in 2018. “When my mom was my age she had me. I’ve never even had a boyfriend,” Harper notes at one point with a mixture of bemusement and something resembling relief. Harper sees Kirsten as both a boss to be feared and a trailblazing mentor to be admired, and the nuances of their complex relationship are as interesting — if not more so — than her budding friendship with Charlie.

Set It Up certainly won’t revolutionize the rom-com genre, but it doesn’t set out to do that. The film delivers a central philosophy about love (you like people because of their good qualities, but you love them despite their flaws) and features plenty of earnest self-actualizing, but it’s first and foremost here to provide a funny, breezy update on a familiar rom-com formula. Unlike its lost twenty-something leads, Set It Up knows just what it wants to be.