Film Review: Sicario: Day of the Soldado Has the Blood But Not the Brains of the Original 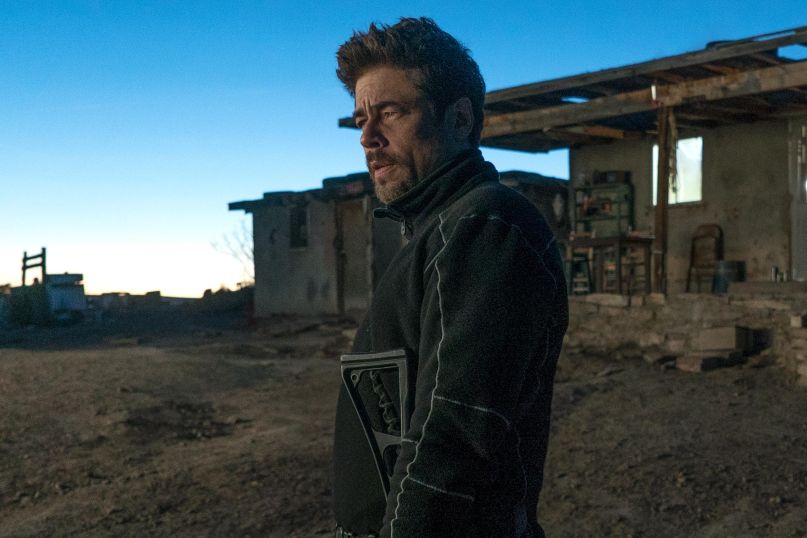 The world of a Taylor Sheridan-scripted film is no paradise: it’s an angry, grim hellscape filled with nihilistic characters forged by tragedy into amoral instruments of extrajudicial violence. No one escapes the events of one of his films without blood on their hands, or a stain on their souls. Sometimes this works, whether in the neo-Western sensibilities of Hell or High Water or his screenplay for the complicated border-war thriller Sicario. With Sicario: Day of the Soldado, Sheridan follows up the latter with a bleak, scowling thriller that is every bit as handsome as it is morally repugnant.

Opening with a harrowing series of Muslim terrorist bombings facilitated by coyotes smuggling them across the US-Mexico border (a scenario ripped from the paranoid fantasies of any given Hannity viewer), Day of the Soldado follows CIA fixer Matt Graver (Josh Brolin) and undercover agent Alejandro Gillick (Benicio Del Toro), both returning from the first film, on a false flag operation to kidnap Isabela Reyes (Isabela Moner, Transformers: The Last Knight), the daughter of a powerful cartel leader. As Brolin tells his superiors, the best way to eliminate the drug/migrant trafficking problem – and by extension, smuggling Muslim suicide bombers into the U.S. – is to stage a turf war between rival cartels: “If you want to start a war, kidnap a prince. The king will start it for you.”

At first, it all goes according to plan: Graver’s well-equipped CIA team intercepts her bodyguards without a problem and snatch her away, ready to drop her off in rival cartel territory. But after Mexican federales force a gunfight, circumstances force Graver and co. to retreat to the border while Gillick tries to sneak Isabella to safety – even as Graver is ordered to take them “off the board.”

As with Sicario, and the rest of Sheridan’s output, Day of the Soldado is nothing if not unrelenting in its depiction of violence, from all sides of the conflict. All the War on Drugs/Terror trappings are there, from lantern-jawed American agents wearing bulletproof vests over well-fitted T-shirts, to AR-15s raised tactically over their shoulders, to night-vision airstrikes filmed with the same hoo-rah sexiness as a Call of Duty commercial. (“It’s a beautiful day – clear skies and large-caliber weapons,” Brolin quips – a Sol-Dad-Joke, if you will.) If you’re looking for mil-porn, there’s enough here to satisfy even the most ardent Tom Clancy readers.

The world of Sicario is scary, and the people who make it so are even scarier, from sneering Mexican coyotes to fanatical Muslim terrorists staring at prayer rugs while holding detonators. Faces are shot, people destroyed in explosions. The opening minutes depict a woman holding her child, begging for her life in a grocery store with a suicide bomber standing mere feet away from her, to predictable results. The first few scenes practically confirm every racist right-wing talking point about the dangers of open borders; apart from Isabel and one well-meaning villager (who’s himself infantilized in his depiction as deaf), you barely see any Latinx character who isn’t a cartel assassin or unscrupulous gang member. In the realm of Sicario, Mexico truly isn’t sending their best.

To be fair, the characters we follow aren’t much better: Graver, Gillick, and the rest are killers resigned to carry out foreign policy dictated by weaselly guys in suits (including Matthew Modine), with nary a thought about the consequences. “Do you know how hard he was to make?” Graver says to Catherine Keener’s fellow fixer upon the prospect of eliminating Gillick as a liability. They’re the kind of cold, clinical government operators Jessica Chastain followed in Zero Dark Thirty, harsh, unrelenting pragmatists forged by unthinkable circumstances. But this time, they’re framed like stalwart protectors who sacrifice their humanity to fight off the barbarians at the gate. It’s a troublesome way to approach a film’s heroes, no matter how cognizant the movie is of their monstrous nature.

Sheridan’s script makes a misguided attempt to find glimmers of humanity in these monsters, muddling the critiques of the same characters that Denis Villeneuve expertly played upon in Sicario. Brolin’s hard-line government agent suddenly develops scruples about killing a friend, when earlier in the film he orders an airstrike against a terror suspect’s brother just so the suspect can watch the night-vision footage. Del Toro, the personification of the moral decay of Sicario’s universe in the first film, becomes an acerbic John Wayne antihero, who takes Isabel under his wing as a surrogate daughter. Simply put, Day of the Soldado de-fangs the previous film’s critiques, softening its monsters into begrudgingly necessary tools for justice.

The major problem is that, unlike the first film, there’s no Emily Blunt character to offer a secondary perspective on this gritty world of hardened killers. Blunt’s wide-eyed FBI agent gave the audience a window through which to evaluate the ethical character of unscrupulous operators like Graver and Gillick, and by extension the War on Drugs as a whole. Without that viewpoint, Day of the Soldado just becomes the U.S. Marshals to the first film’s The Fugitive – a dark, by-the-numbers procedural that expects supporting characters to handle the brunt of a story, without sufficiently examining the factors that made them what and who they are.

It’s still a handsome film, at least. Stefano Sollima, an Italian director with a penchant for gritty crime dramas (the TV version of Gomorrah, ACAB – All Cops Are Bastards), is certainly a suitable choice to take over for Villeneuve, carrying the latter’s stark visuals into the sequel. Dariusz Wolski’s arid, textured photography captures the dust-riddled landscapes of the Mexican desert quite well, and the film is filled with the apocalyptic hum of Hildur Guðnadóttir’s ominous ambient score. The action scenes are tense and well-staged, and the performances are staggeringly effective. On a technical level, it’s a notable work of formal craftsmanship.

But to what end? In a time when the border is a hot-button issue, Day of the Soldado fails to explore that topic with the complexity it deserves. Instead, Sheridan’s script is a deeply unsettling, apathetic shrug of the shoulders toward humanity, shined over by slick, intense filmmaking that blunts any attempt to complicate its sneeringly conservative outlook. Its very concept perpetuates the worst kind of fear-mongering about Mexican immigrants and Muslims, with a resignation that only ruggedly macho guys with big guns can solve complex sociopolitical problems — even if it costs a little girl (or, in a larger sense, our nation) its soul.

\Be warned: audiences are going to cheer and clap at every air strike, headshot and toss of a grenade in the film like it’s a Dirty Harry movie, and it will chill you to the bone.