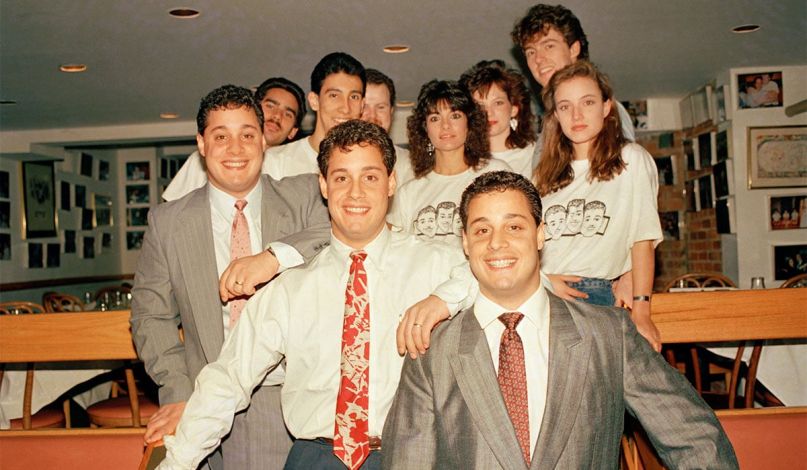 This writer knows a man that proudly brags about walking out of movies all the time. His local theater grants him a refund if he bails before the 30-minute mark. And Three Identical Strangers? This documentary is an opportune enabler of the aforementioned policy. That friend came to mind here because the first half hour of the film is akin to a Buzzfeed headline-turned-movie. “Wait until you hear what happened to these three ‘strangers’ – and you won’t believe what happened next.” But you really may not believe what happens next.

The three were part of a larger experiment by shady adoption agencies and scientists. Really.

Got your attention now? Don’t worry, this is the majority of the movie, not really a spoiler, and absolutely worth mentioning because it’s the film’s best hook. In spite of Three Identical Strangers’ unpromising beginnings, Tim Wardle’s ‘five years in the making’ documentary eventually enthralls. This is intrigue assembled through testimonials, patient detective work, and a willingness to focus and wonder. And it has compelling things to say about genetics, adoption, psychology, behavior, science, nature, nurture, and that ever-complicated notion of family. Mercifully, things get dark and fascinating after minute 30. Now take a minute to know Eddy, Robert, and David.

Eddy Galland. Robert Shafran. David Kellman. Different names, upbringings, and so on. The record is as follows: Eddy, Robert, and David were all born on July 12, 1961, but separated and adopted into different families through the Louise Wise Adoption Agency in New York. Why split them? The Wise agency felt triplets were hard to place as a package deal, and as such sent Eddy, Robert, and David to separate homes. But life, as Dr. Malcolm once said, finds a way.

This is where the film begins: sickly sweetness, ‘80s pop songs, and other such wasted time. Upon arriving at a Catskills community college in 1980, Robert was greeted oddly. Everyone thought he was another student named Eddy Galland, but Eddy wasn’t there, and people thought Eddy had left. One of Eddy’s friends insisted that Robert call Eddy, and the rest is a little bit Parent Trap. Robert met Eddy, and the two East Coast brothers realized they were one in the same. Same curly locks. Same thick hands. Same mannerisms, tastes, quirks, even accents. They were related, all right.

Oh, and then there was a triplet. David Kellman was in the wings, and found Robert and Eddy in the papers. What’s next is the stuff of hack montage: “Walking on Sunshine” as three long-lost brothers discover one another. It’s tooth-grinding, a long series of meet cutes and Long Island hyperbole. They open a restaurant named Triplets (stop it). They appear in a Madonna movie. It’s ostensible treacle in the style of pleasant Facebook Moments-type videos. It comes across as shallow I Love the ‘80s stuff. They’re chance brothers, what a scoop.

The triplets enjoyed a certain level of kitsch fame, but the nagging feelings remained. Robert and David appear onscreen and admit that they couldn’t care less about their split at the time of their reunion. They were back together, and they had a hell of a 1980s. They were on Donahue! But why were they broken up to begin with? To reiterate the Wise party line, the brothers’ parents were told that it was a practical decision. Pushing three individuals is easier than a package deal. But something stuck in everyone’s craw: why wouldn’t Wise find separation anxiety inherently bad? Welcome to early 1960s thinking and psychoanalysis. Yes, your fears are real.

The brothers, after years of separation and more years of reconnection, find something far more sinister behind their breakup: science. What was the scientific question? Simple: what would happen if you split up orphans (twins and triplets)? Would they come back together? Would they grow up different? What about class, status — what else do life’s little details have to do with how we grow and evolve? From a historical and scientific standpoint, there’s a certain degree of excitement to this research. But the more Wardle reveals (or struggles to reveal because of locked files), the more half-baked and ghastly the tests begin to sound. This is where Wardle’s movie works: in the vein of a thread-pulling thriller.

Wardle’s best work is on the film’s back-end, allowing the participating brothers Robert and David to reflect. Why them? What was the point of all this, and when will they understand the true thesis of the work to which they never had a chance to consent? Wardle even manages to get scientists involved in the research to participate and speak, and there’s a creepy wide-eyed enthusiasm to them. Research assistants, scientists on the periphery, all dubiously unaware of the more sinister components of their work. There’s a “look it was the ‘60s, we didn’t know, but we assumed we were breaking new ground in child development work” mantra to their science. Wardle allows the details to roll out with impact, and even some insight. Curiosity for the grand genetic schemes is a great sell, but the human element, the lament for lost time, truth, and family? That sticks at the end. It’s almost Truman-esque, the implications of a life watched unaware.