"You know, drugs and sex, those are the usual things. This was something new, and I thought it was inventive." 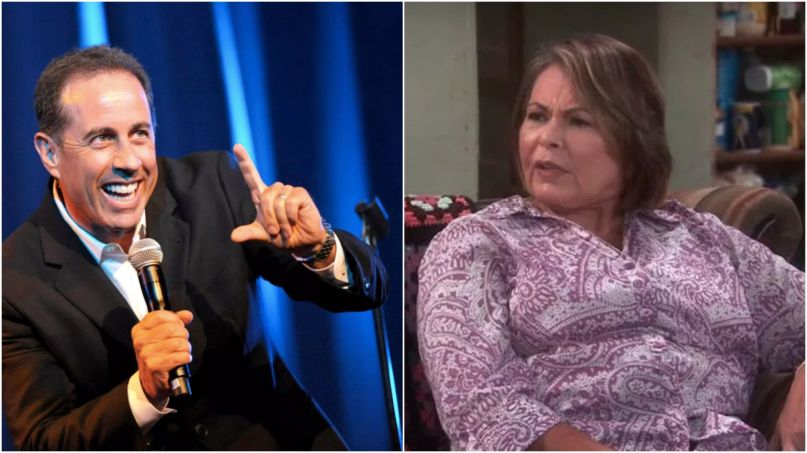 “I don’t even know why they had to do that,” Seinfeld said. “It seemed like, you don’t need to murder someone that’s committing suicide. I thought the firing was overkill. She’s already dead.”

He also told ExtraTV, however, that he found it interesting watching Barr “crash and burn.” “All she had to do was press ‘share’ and it was all over, so I thought that was kind of cool ’cause it was different,” he said. “You know, drugs and sex, those are the usual things. This was something new, and I thought it was inventive.”

While his remarks to USA Today suggest a belief that the show would have floundered anyway if allowed to continue its run, he demurred when asked whether Barr should have been allowed to continue with the role. “I don’t really watch that kind of TV, so I don’t know much about it,” he said.

Still, Seinfeld understands the iconography of Roseanne Conner, and in yet another interview with Entertainment Tonight, he suggested ABC should have sought another actress for the role for their forthcoming spinoff/reboot, The Conners. “They brought Dan Conner back. He was dead, and they brought him back. So why can’t we get another Roseanne?” questioned the comedian. “There’s other funny women that could do that part. You need to get the comic in there. I hate to see a comic lose a job.”

All that said, he also made his feelings clear on the subject of reboots in general. Despite opening the door to a return of Seinfeld earlier this year, he squashed the hopes of anyone idly daydreaming about it:

For his part, Seinfeld is moving on to the tenth season of Comedians in Cars Getting Coffee, which premieres July 6th on Netflix.