Justin Vernon performs with Dead and Company in Wisconsin: Watch

The Bon Iver leader joined the surviving members of the Dead for "Black Muddy River", "Friend of the Devil", and "Bird Song" 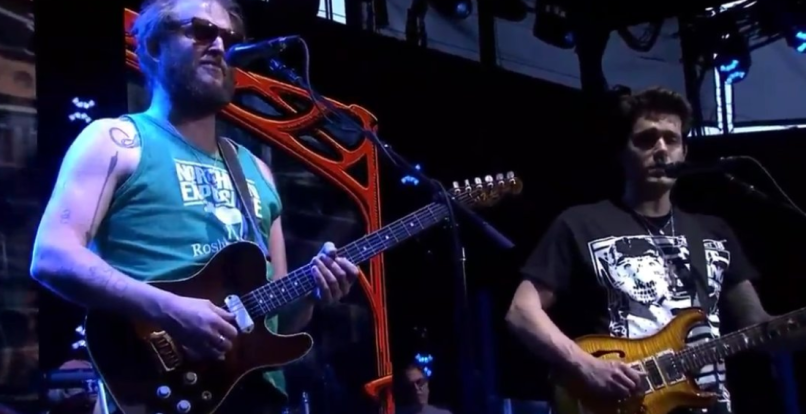 Justin Vernon with Dead and Company, photo via @ThoughtsOnGD / Twitter

In 2016, Justin Vernon contributed a cover of Grateful Dead’s “Black Muddy River” to the Red Hot Organization charity compilation, Day of the Dead. That summer at the Eaux Claires Music Festival, Vernon staged a Grateful Dead-themed jam session featuring Bruce Hornsby, Jenny Lewis, Phosphorescent, and more. Needless to say, the Bon Iver mastermind is a pretty big fan of the Dead, and last night he got a chance to play with the band’s surviving members in person when he joined Dead and Company on stage at Wisconsin’s Alpine Valley.

Per Live Music Blog, Vernon joined the Dead’s Bob Weir, Mickey Hart, and Bill Kreutzmann, along with John Mayer, for performances of “Black Muddy River”, “Friend of the Devil”, and “Bird Song”. “Nbd sitting in with the dead tonight at alpine,” Vernon tweeted prior to the show. Watch fan-shot footage below. Update: You can replay the full set below (Vernon comes in at the 41:26 mark).

Nbd sitting in with the dead tonight at alpine

It's like the two extremes of white attractiveness. #DeadAndCompany pic.twitter.com/R6PLe4UzXB