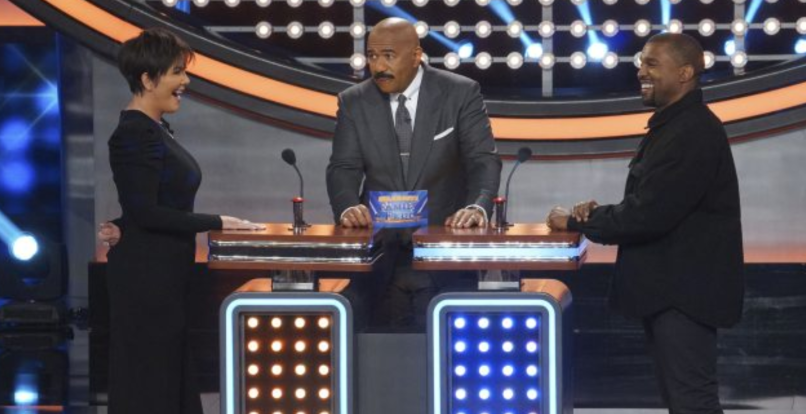 Kanye West had a hell of a birthday on Friday. He released his third album in two weeks (see: Kids See Ghosts), his basketball equivalent Steph Curry won the NBA Finals (hey, his words), and his go-to cartoon heroes Rick and Morty helped him blow out the candles (it was pretty great). It hardly stopped there: On Sunday evening, ABC provided a choice bookend to his birthday weekend by airing his appearance on Family Feud.

As promised, the hour-long episode featured The West Family, led by Kanye West, his wife Kim Kardashian-West, and other family members, competing against The Kardashian Family, featuring family matriarch Kris Jenner, Khloé Kardashian, and Kendall Jenner. Both families were playing for the Children’s Hospital of Los Angeles, and let’s just say, they didn’t disappoint.

Harvey asked the families to name the top answers for categories including: “Why Steve Harvey is a good kisser”: “An occasion you would slip into something sexy”; “If you’re at a wild party and everyone is naked, name someone you would hate to see show up”; and “Animals with spots.” Spoiler alert: Though Team Kardashian was the victor, Kanye and Kim got to play Fast Money because of their fandom of the show.

We finally have a new Kanye shrug gif ???? ???????? #CelebrityFamilyFeud pic.twitter.com/HWt4FLKhQy

The Kardashian family won, but playing the fast money round is Kanye's dream.

So they're passing the opportunity since they're all playing for the same charity ???????? #CelebrityFamilyFeud pic.twitter.com/yvw2AoNU92