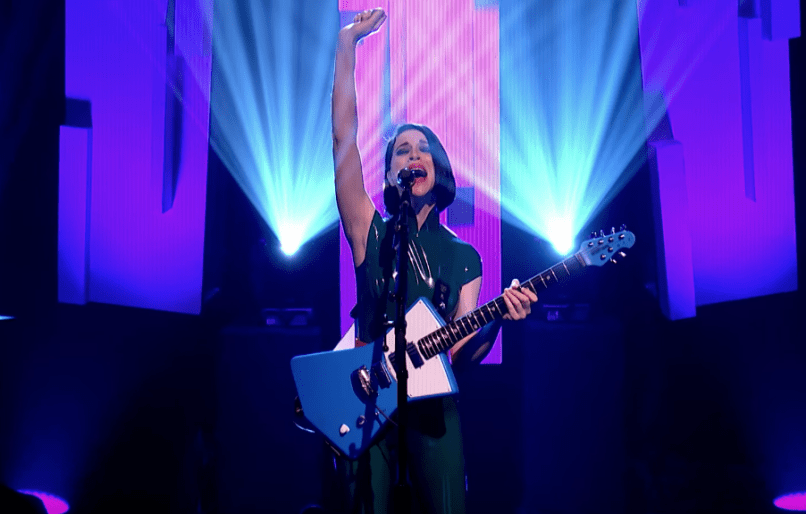 The current season of Later… with Jools Holland continues to crush it. (Is there a real reason we can’t have a nice music show like this in the States? Freakin’ Lip Sync Battle…) On the latest episode, Holland welcomed a quartet of mega talents, headlined by St. Vincent. Annie Clark and her band delivered her recent reworking of “Slow Disco” from MASSEDUCTION, the aptly titled “Fast Slow Disco”. Unsurprisingly for last year’s best live act, the performance was simply stunning.

Equally impressive in a very different way, Christine and the Queens performed “Girlfriend”, her first new single since 2015. As she tends to do, Héloïse Letissier chose to forgo a complicated stage set up in favor of a cadre of backup dancers for a show that was a plot line away from being musical theater.

“Jazz king” (as the show duly described him) Kamasi Washington came on with his killer band to perform his rearrangement of the title song from the classic Bruce Lee film Fist of Fury. He cut five minutes from the track off his upcoming Heaven and Earth double LP, but it didn’t lose any punch in the deliver.

Finally, former Yuck frontman Daniel Blumberg took the stage for a stark and stirring performance. Alongside violinist Billy Steiger and double bassist Tom Wheatley, Blumberg delivered “The Bomb”, a song from his first release under his own name, Minus.

Check out all the performances below.