The End of Bonnaroo as We Knew It

As the Farm's past recedes, the next generation emerges more immersive than ever 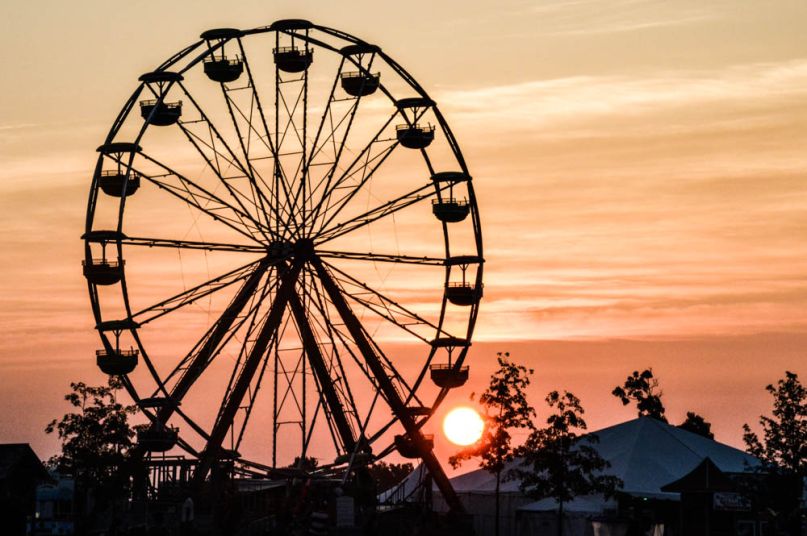 We love Bonnaroo. Consequence of Sound founder Alex Young covered it live during our site’s first summer and continued to send writers every year after. We declared Bonnaroo our Festival of the Decade in 2009 and our Festival of the Year as recently as 2013. Our attendance has been as regular as anything else on our calendar. That is, until 2018. For the first time since Consequence of Sound started publishing live festival coverage in 2008, we won’t be covering Bonnaroo.

We’re certainly not the first outlet to give the festival a miss; The New York Times laid out a pretty convincing argument for no longer covering Bonnaroo and Coachella all the way back in 2016. This decision was difficult, but it wasn’t necessarily a surprise. When the schedule dropped back in January, we called Bonnaroo “a once-great festival in search of an identity” and dinged the 2018 lineup for, among other things, stocking its top line with lackluster headliners (specifically Eminem, Muse, and The Killers) and saturating everything from the mid-card on down with anonymous (and seemingly interchangeable) EDM acts that didn’t do enough to differentiate Bonnaroo from the myriad of other festivals that now crowd the American summer. We also recapped the festival’s string of recent changes and challenges, from its 2015 acquisition by Live Nation to the cratering ticket sales of 2016 to a 2017 edition that featured radical changes to everything from the Other Tent (revamped from an eclectic genre catch-all into an all-EDM stage) to the Sunday headlining spot (given to The Weeknd instead of the customary jam band or legacy rock act).

Nothing about any of those criticisms has changed in the months since then, so when it came time to secure credentials, we just opted to sit it out instead. We’re not the only ones who felt that way. Over at Inforoo, the bustling message board that’s served as the Internet’s unofficial Bonnaroo hub since 2004, the response was equally lackluster. You can find zingers throughout the official 2018 lineup thread; for every post expressing qualified excitement, you’ll find another that’s indignant (“This lineup feels like a punch to the gut”) or disappointed (“what a waste of Bon Iver”) or flat-out dismissive (“The last 13 lines = ‘Who?’“). Many of these criticisms seemed to come from some of the board’s most active posters who, like us, had relied on the festival as a summer staple.

Take longtime fans Chris Devaney and Jack Johnson. Devaney attended every Bonnaroo from 2004 through 2017. Johnson went seven times between 2003 and 2016. Neither one will be at the festival this year, with the lineup being the chief reason why.

“Bonnaroo lineups used to shape my music listening for an entire year,” Johnson says. “I’d see a bunch of names I already loved, and because I trusted Bonnaroo, I’d dive into the names I didn’t know and find a bunch of new acts I dug. But so many of the acts now are so same-y and bland that it’s hard to trust that I’ll have the experience that makes the time, money, and energy worth it.”

“I used to advocate for the festival year-round,” Devaney says. “I no longer do that. The lineup more closely resembles every city’s alternative radio station festival these days.”

Pressed further, more specific gripes appeared, ones that indicated just how much thought both men have given to the changing dynamics of their favorite festival. In an email, Devaney walks me through calculations showing that, over the last eight years, average daily programming time across the festival’s five biggest stages decreased by 90-120 minutes per day while ticket prices rose by 60%. Johnson laments the curtailing of the fest’s legendary late-night and sunrise sets (which now follow a stricter cut-off around 3 a.m. in order to make room for the Kalliope’s all-night dance party), as well as the preferential treatment given to EDM over other electronic genres.

“Book some house, book some drum n’ bass, book some acid,” he says. “Give electronic music fans something with depth and weight that they can sink their teeth into.”

Taken one by one, these changes might seem tolerable, chalked up to the natural evolution of a festival that’s already undergone plenty of other reinventions over the years. But, coming all at once in the wake of 2016’s disastrous nosedive, Bonnaroo’s rapid reshaping sent another, more bittersweet message: maybe this festival isn’t for us anymore.

Despite their recent complaints, both Devaney and Johnson still consider themselves a part of the greater Bonnaroo community and count the festival’s enduring spirit and communal good vibes as two of the main reasons they may one day return. Since the tents first popped up at Bonnaroo’s inaugural edition in 2002, the festival’s campgrounds (and the gonzo inhabitants within) have always felt more like a congregation than a festival audience.

David Brendan Hall agrees. After covering the festival as a writer and photographer every year since 2007 (including as a correspondent for Consequence of Sound), the music journalist will take his first year off from Bonnaroo in over a decade in 2018, a reality that’s left him with a kind of melancholy nostalgia.

While he’s also underwhelmed with this year’s headliners (“Deep down, I love The Killers, but if you go to a lot of festivals, you see The Killers in the lineup, and you’re like ‘Again?! Motherfuckers!'”), Hall is also clear-eyed about the concessions and evolutions Bonnaroo’s already made in order to keep the festival viable — especially in a world where Lollapalooza no longer sells out in 20 minutes and high-profile festivals like Sound on Sound and FYF get cancelled outright.

“It’s definitely appealing to a younger generation,” Hall says. “Those are the people who’re going to drop their cash. That was me once.”

Instead of lamenting his own passage out of Bonnaroo’s target demographic, Hall instead envisions a world in which teenagers who show up for Bassnectar or Dua Lipa also spend parts of their weekend discovering Nile Rodgers and Sheryl Crow, thus combining Bonnaroo’s recent trend-chasing with its historic dedication to seasoned artists and musical discovery. He reserves his highest hopes for this year’s SuperJam™.

The ramifications of Bonnaroo’s youth movement also interest Dave Paulson. As a reporter for Nashville newspaper The Tennessean, Paulson’s covered Bonnaroo since 2007; in that time, he’s done some of the best reporting on the festival, including recent pieces investigating Bonnaroo’s disastrous 2016 and divisive 2017 editions. When I speak to him about this year’s festival, his biggest interests concerned Bonnaroo’s increased emphasis on the festival’s non-musical experiences.

“The experience and the camping element and the destination element of Bonnaroo kind of futureproofs it, in that it can’t be replicated,” Paulson says. “This year, they’re really leaning into the experience of it all. They really amped up curating these experiences and activities in the campgrounds.”

That means an entirely revamped approach to campgrounds, which (in addition to sorely needed bathroom and shower upgrades) now sport all-new “plazas,” blown-out versions of the old campsite pods designed to serve as themed activity hubs. Campers in Plaza 3, for instance, will have easy access to the circus shows and cinema of Brooklyn’s House of Yes, while those staying near The Well in Plaza 6 can soothe their muscles with YogaRoo or learn about the healing power of crystals from an on-site mystic.

Tailored to a generation more easily swayed to spend money on experiences rather than material goods, the new investment in non-musical activities may represent a trend towards turning Bonnaroo’s amenities into selling points that are equal to or even ahead of the fest’s actual music lineups. For Paulson, it makes good marketing sense.

“It’s a huge marketing move, in that you’ll have people out there doing crazy, really interesting things that they’ll naturally share on social media, and their friends will see what a life-changing experience, or at least life-changing when you’re 22, Bonnaroo is,” Paulson says. “That’s their edge. That continues to be their ace. When it comes to the fascination with the Bonnaroo brand, music’s only part of it.”

Everyone here has experienced an unforgettable moment at Bonnaroo. For Paulson, it was Paul McCartney’s set in 2013. For Hall, it was the SuperJam in 2007, when John Paul Jones turned his unannounced appearance with Ben Harper and Questlove into the world’s best Led Zeppelin tribute show. For Johnson, it was the sight of Slayer’s Tom Araya cracking up as two audience members dressed as Captain Crunch and a banana destroyed one another in the pit. Devaney’s was the easiest choice of all.

Paulson’s right, though. While exhilarating moments like those will still happen at Bonnaroo, they’ll happen largely to a new generation of fans, one with different (but no less valid) festival values than the one that came before. Music is now just one of many options under the “Experience” pull-down on Bonnaroo’s website. Depending on how you scheduled your weekend, you wouldn’t necessarily have to leave the campgrounds, where someone’s sure to add “did karaoke with T-Pain” or “grilled a steak with Chef Tim Love” to the top of their own Bonnaroo list. While that kind of a la carte immersion is a blast in person, it’s also diminished in translation; the more of the festival’s best memories that are made away from the stage, the less the expertise of a publication like ours is needed. That’s the last answer to the question of why we’re not covering Bonnaroo this year, and it’s also the one we’ll be wrangling with next year and the year after that.

There will be more years, or course. Bonnaroo isn’t going anywhere; in fact, if a recent accidental vendor revelation on Reddit is to be believed, the fest is on track to sell around 76,000 tickets in 2018, a figure that represents a total rebound from the attendance nadir of 2016. However, the festival is entering its third phase. Just as the jam bands of the earliest installments gave way to the indie rock and legacy acts of Bonnaroo’s high-profile middle years, those artists are now in turn giving way to the festival’s next generation of entertainers bent on making a music festival so inclusive that you don’t even need to be that big of a music fan to have the best weekend of your life. Bonnaroo may lose some of the old diehards in the transition, but it might just create even more new ones in the process.

Maybe there exists a future lineup that will please Bonnaroo fans past and present, one that will find Jack Johnson and Chris Devaney and David Hall returning to the festival whose culture they helped define to swap lore from the past and learn a little about the new-look Bonnaroo of the present. Maybe the festival will reintroduce extended sets or let the notes of the SuperJam™ once again ring until dawn. Maybe the combined monetary might of Live Nation and a few thousand amped college kids will finance a set even better than all the ones that have come before, one whose retelling will leave fans breathless and festival lore replenished. Maybe we’ll be there to tell you all about it. Maybe none of those things will happen. Maybe they all will.

For now, all we can do is speculate and watch from afar as the world descends on Manchester without us, comforted by the knowledge that Bonnaroo continues finding ways to remain a singular festival experience for who’s on stage, who’s in the crowd, and who’s there to tell you it was really, really fun.